I wake up somewhere over the Atlantic Ocean and am delighted to find we have been flying 7 1/2 hours! Other than stirring a few times to re-position, I slept soundly. These seats lay back farther than most and I have a WINDOW seat thankyouthankyouthankyou, Lord!

So we’re feeling pretty spy when we arrive in New York and decide to go to Times Square Church. An airport worker snags us as we’re walking toward Ground Transport. She asks where we want to go and proceeds to give us a crash course on the city metro-transport. Buy a $5.50 ticket, hop on the air-train, get off at Station #5, take the bus to Union Station in Queens, get the subway there, make sure it’s the E train and get off at 42nd street. Sounds easy enough. It’s 20 degrees and the wind is blowing hard as we wait in the little bus stop thingie. We’re thankful for our down jackets and wish for hats.

Settling on the bus, we leave a seat with spilled coffee on it between us. A couple of stops later a fashionably dressed, older woman boards. She takes one look at the coffee and sits down anyway. Our new companion strikes up a conversation and quickly informs us it will take an hour to get where we are going. We had forgotten that buses stop every few blocks. “No worries”, she says, “just follow me. I’m taking the same subway.” She seems delighted to have an audience and wants to know what church we attend. “Oh yes,” she nods, “I know all about you. I’ve studied religion. All of them except Islam. I can’t stomach that one.” This leads to interesting dialogue between us on the history of the Catholics and we listen as she expounds on the Franciscans, Jesuits, Dominicans, and Catholic Orders. She knows about the persecution of Anabaptists, the Inquisitions, and the Crusades, but anything bad is blamed on the Dominicans, of which she is not a part.

She is in the Fashion and Film industry, graduated college at age 17, reads 5 books a week and has a photographic memory which she claims can actually be a hinderance when it comes to learning because one may learn information without understanding the concept. When she took college tests, she would close her eyes and run the books text through her mind until she came to the answer she needed.

Our bus stops. “Follow me”, she directs, telling me to zip my purse, hold the zipper in front and hold my purse close to me. Down the subway we go. There are signs and I suppose we could have found the E train on our own but they are doing construction and it’s really nice to just follow her. Ignoring the apparently homeless man stretched out on the subway bench she settles opposite him and we sit on either side of her like the rapt students we are. “Don’t worry,” she repeats, ” I have a weapon in my purse”.

Her discourse continues. As we listen to her talk about artists, her girls who walk the runway, etc I pick up that she volunteers in the church, at a shelter which rescues abused cats, and in an Art Gallery in her spare time. She’s never been married and Jesus is her best friend. Yes, she prays directly to God…the priest are like fathers. Confession is like talking to your dad. In fact, she goes on to say, Catholics are the only people in the world who don’t spend a fortune on psychologists because they have their own…the priests.

Then suddenly she is gone. Whew. That was a fast hour and I am left to wonder…who exactly was that lady??  I don’t know but I guess when I get home I’ll google her favorite artists and check them out.

Everyone has a story. 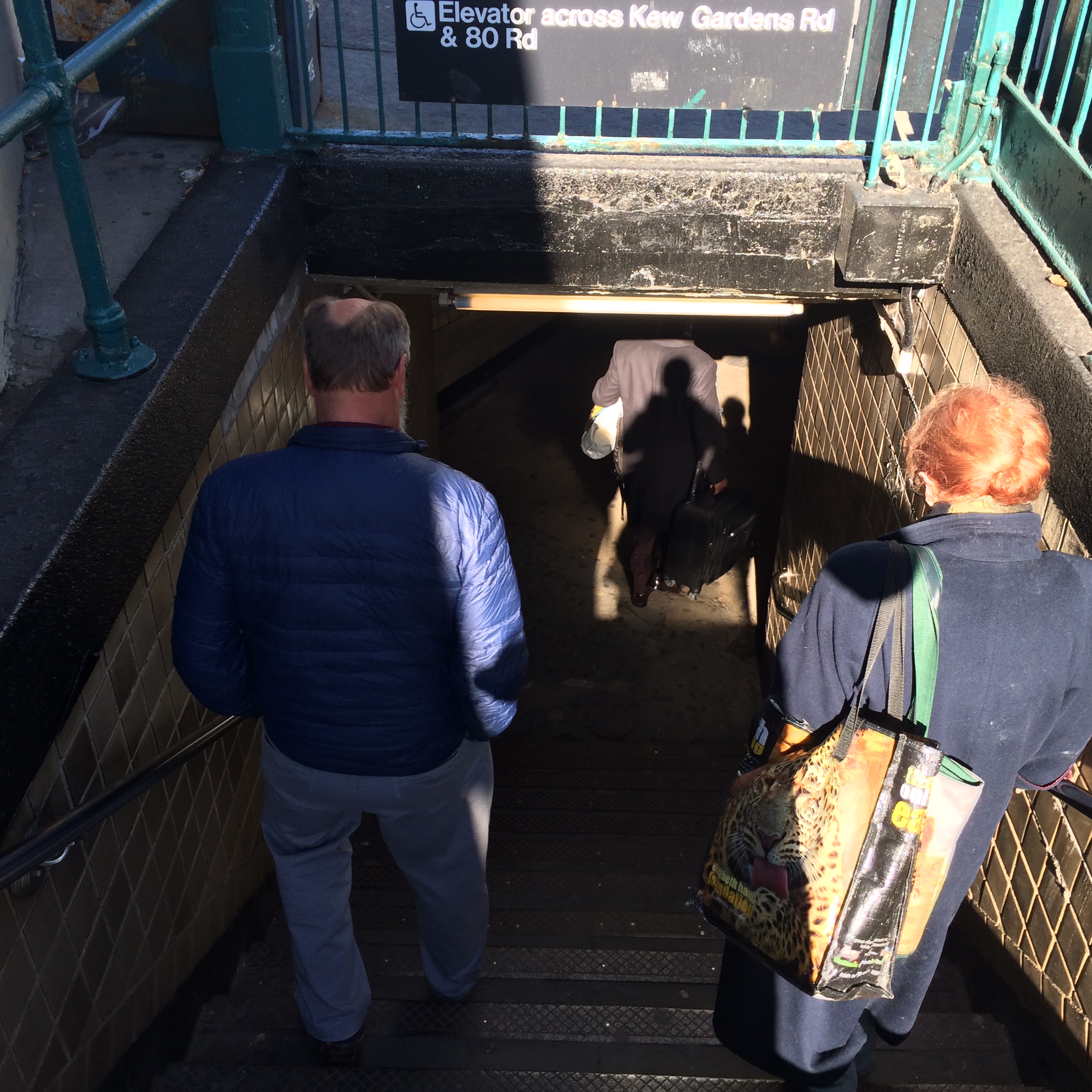 42nd Street is a few blocks from the church and we arrive an hour late but we’re still in time for a song and the main sermon. And what a fitting sermon it is for us right after our trip! The topic is Give Us This Day Our Daily Bread and the exhortation is to be IN the Word, to partake of the provision God has already given us. 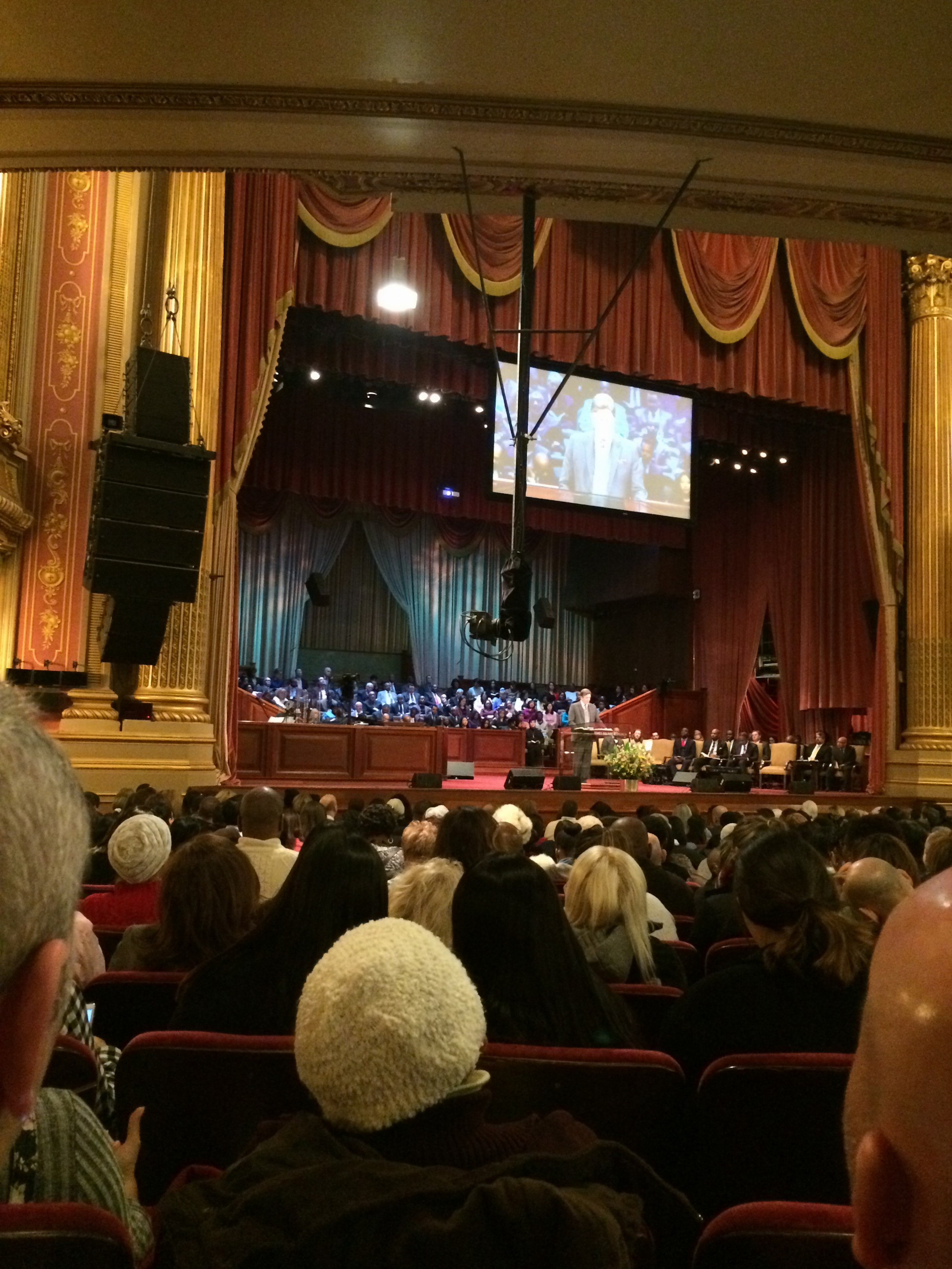 A few of the ministers words that I jot down….

These are the last days. Soon we will see Jerusalem surrounded by armies.

In the last days, many will be deceived because they are not in the Word.

LORD, take me a little farther than I’ve gone before.

The volume or amount I read won’t make me holier…I have to *believe* it and ask God to reveal truth to me.

My opinions will not go with me into heaven…only the Word.

Forgive us for having insufficient strength to get through the day because we have not consumed the Word in the morning.

The sanctuary is full of people of all ages and ethnicities. It’s inspiring to be here and especially so when I think of the setting this church is in. Our walk back to the bus station takes us down Broadway and past multitudes of people. I decide to slow down even though it’s really cold and try to catch someone’s eye. I am unsuccessful. Not one person looks at my eyes even though I am trying my best. No one even glances my way. I think about how everyone has a story and hope that some of these folks will venture into Times Square Church on Friday nights, the night they preach to the unsaved. Maybe some who I am passing already go. Maybe they are just too cold to look at anyone. 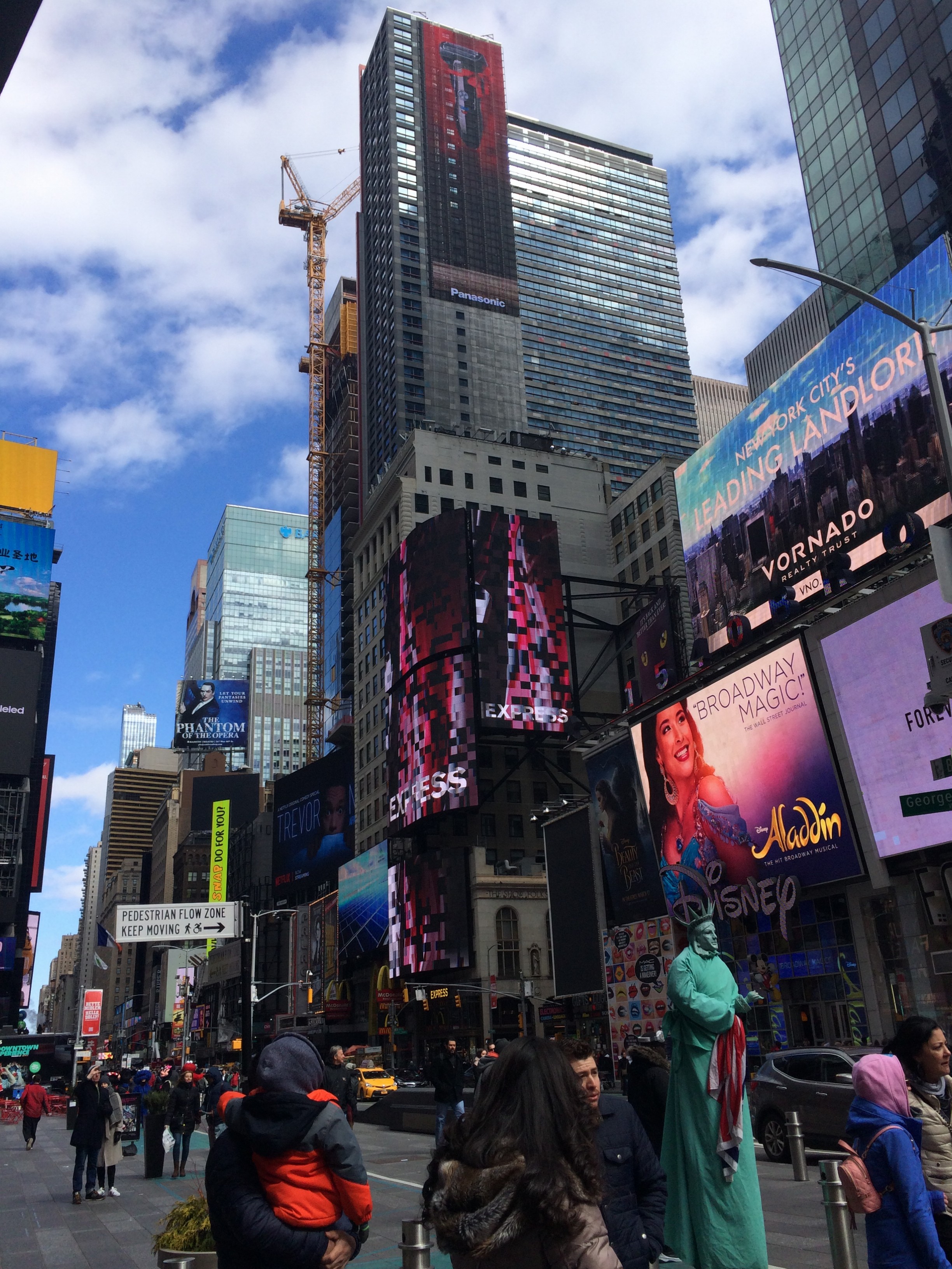 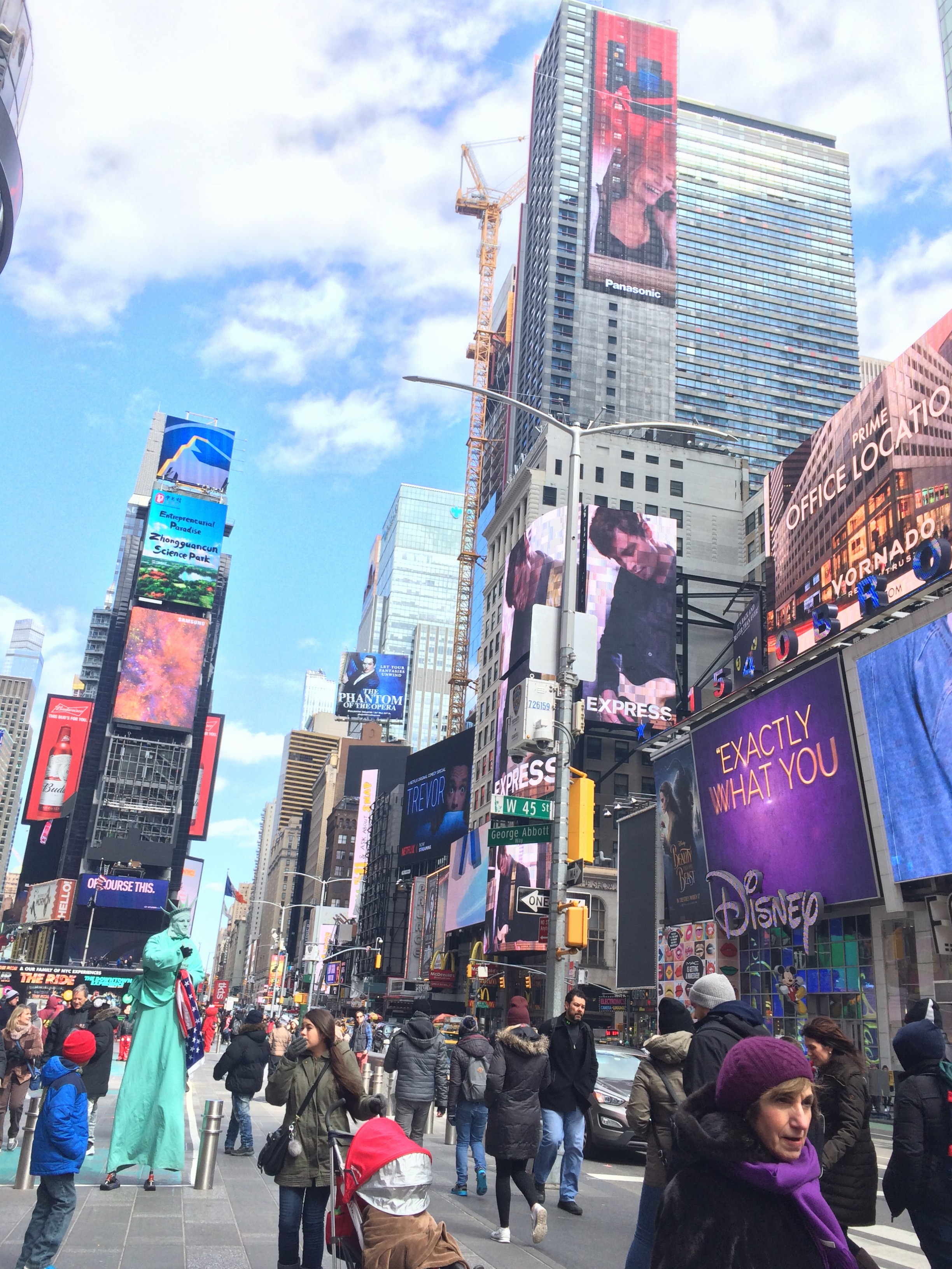 Without our friend, trip back to the airport feels long and we are getting tired. A conversation with a young man is welcome…he is adopted, about to graduate as a Chiropractor, can’t wait to get out of the city and back to his family, and is trying to eat a plant based diet. This gives us quite a bit of common ground and we share our story of Zeke with him. He tells us he has found his bio mom on Facebook but is reluctant to “tear up her life” by reappearing.

Everybody has a story.

We pick up our luggage and decide to take a taxi to our motel instead of a bus as we had planned. We’re kind of tired of buses by now. I won’t bore you with taxi details except to say it costs twice what they told us it would and it was already a LOT. We must look like suckers.

Note to all: get online and order a taxi. Don’t just hop in one at the airport. We use an “airport approved” taxi instead of the hounds who are shouting out to everyone but we still get ripped off.

Home Sweet Home will feel good. We have learned much these past weeks and walking where His-story actually happened has been amazing. 240 year old America suddenly seems kind of new-baby-ish.

I keep asking myself what my favorite place was. If I could do only ONE stop again, what would it be. I’m pretty sure the answer is En Gedi and I’m not even sure why except that it’s not ruins, it’s real. It probably hasn’t changed much in thousands of years and David, a man after God’s own heart, is such an inspiration to me. Don’t miss it if you go to Israel.

The End,  I guess. I’m going to miss writing each day. 🙂  We slept well, left Newark this morning after a 2 hour delay and are currently flying over snow covered square mile roads somewhere in the midwest. It looks like we might miss our connection to Pasco but after being gone for 24 days, we don’t feel any stress. Shelly has sweetly agreed to pick us up and God will take care of us.

I’m so thankful God is writing our Story. <3