Today is the day this whole “levels of the city” thing finally clicks for me. Our first stop is to see the Temple Mount wall that has been excavated from the time of Jesus (or King Herod) . We saw it yesterday from the top as we were walking up to the Temple Mount but today we go to the bottom of it and look up. 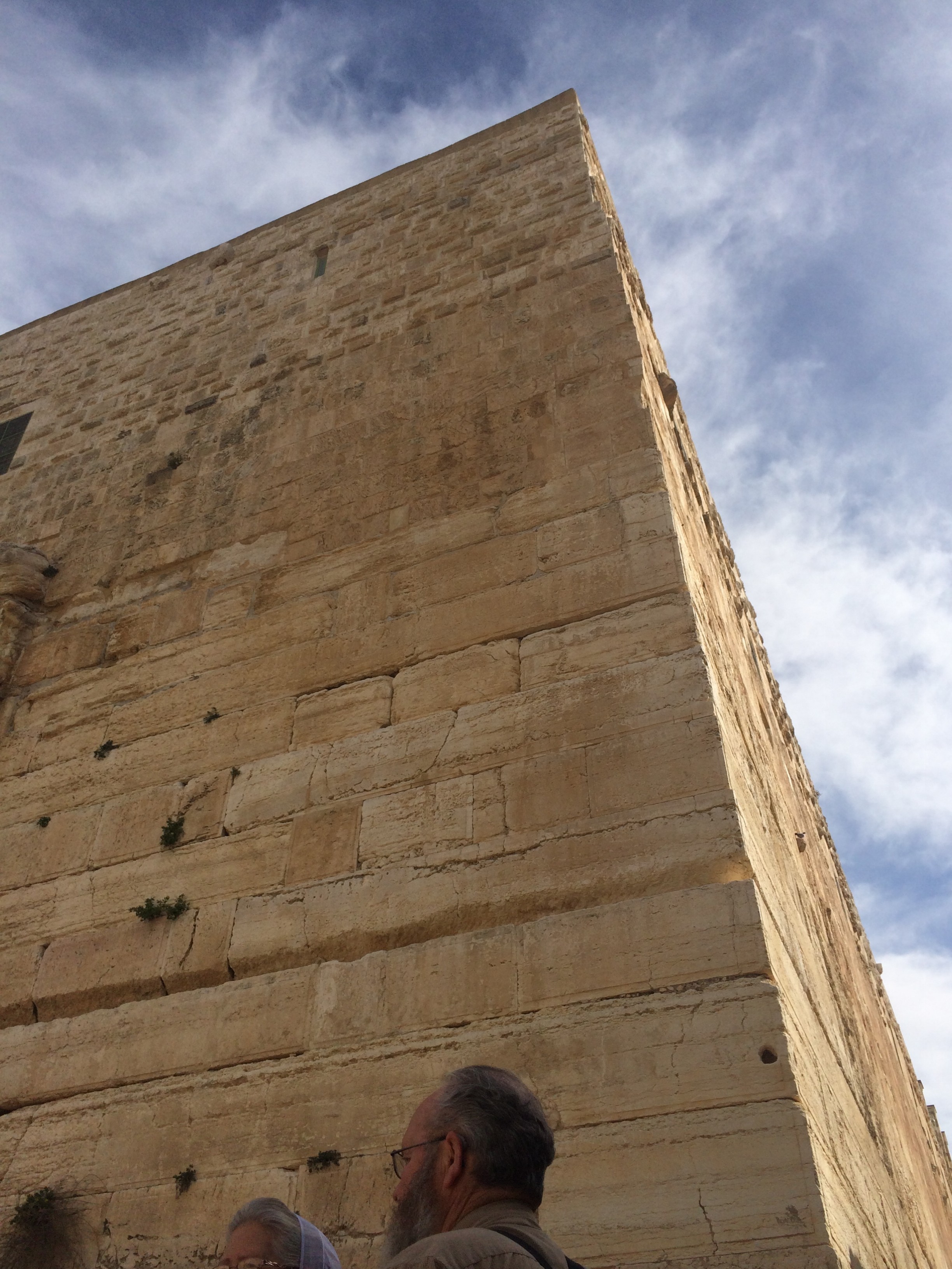 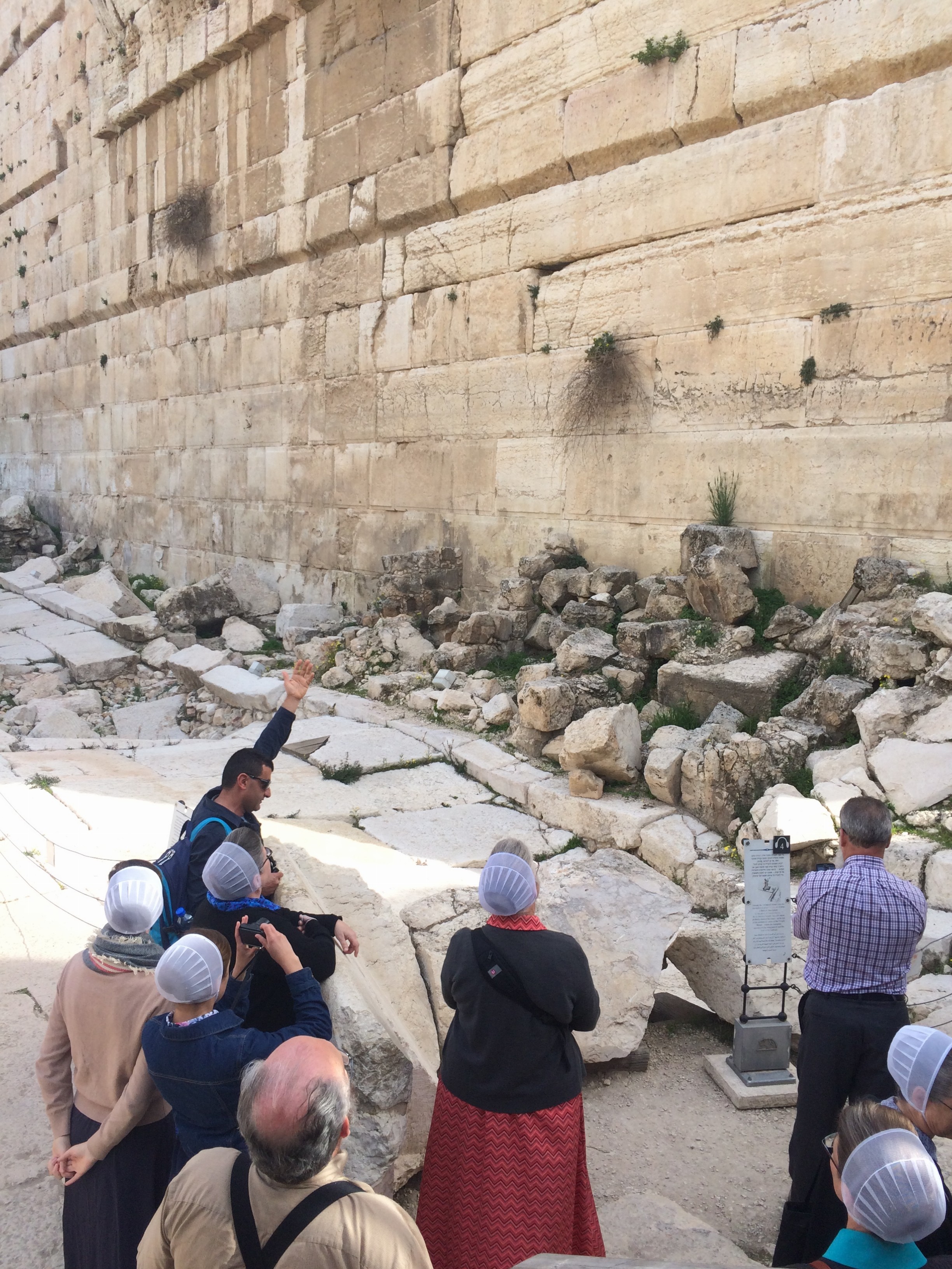 We can see the pools where Jews would cleanse themselves before ascending the steps to the Temple Mount Entrance. Wyatt thinks the apostles stood on these steps to preach and used the cleansing pools along with the Pool of Siloam (which is very near us) to baptize the 3000. The pools are large and there are many so it’s easy to imagine the baptizing might have taken place here.

How brave those apostles were, to stand in this spot and proclaim the New and Living way! 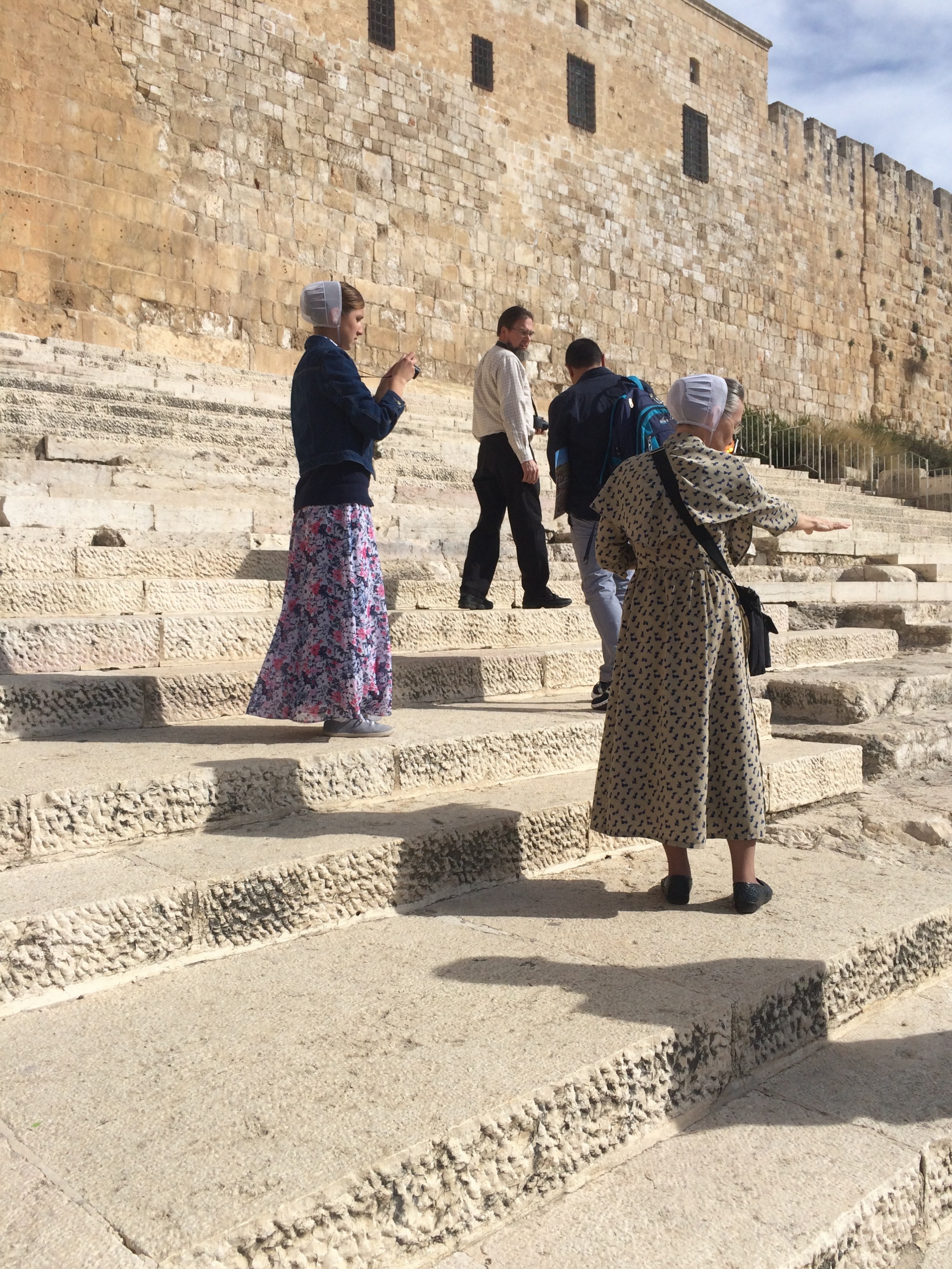 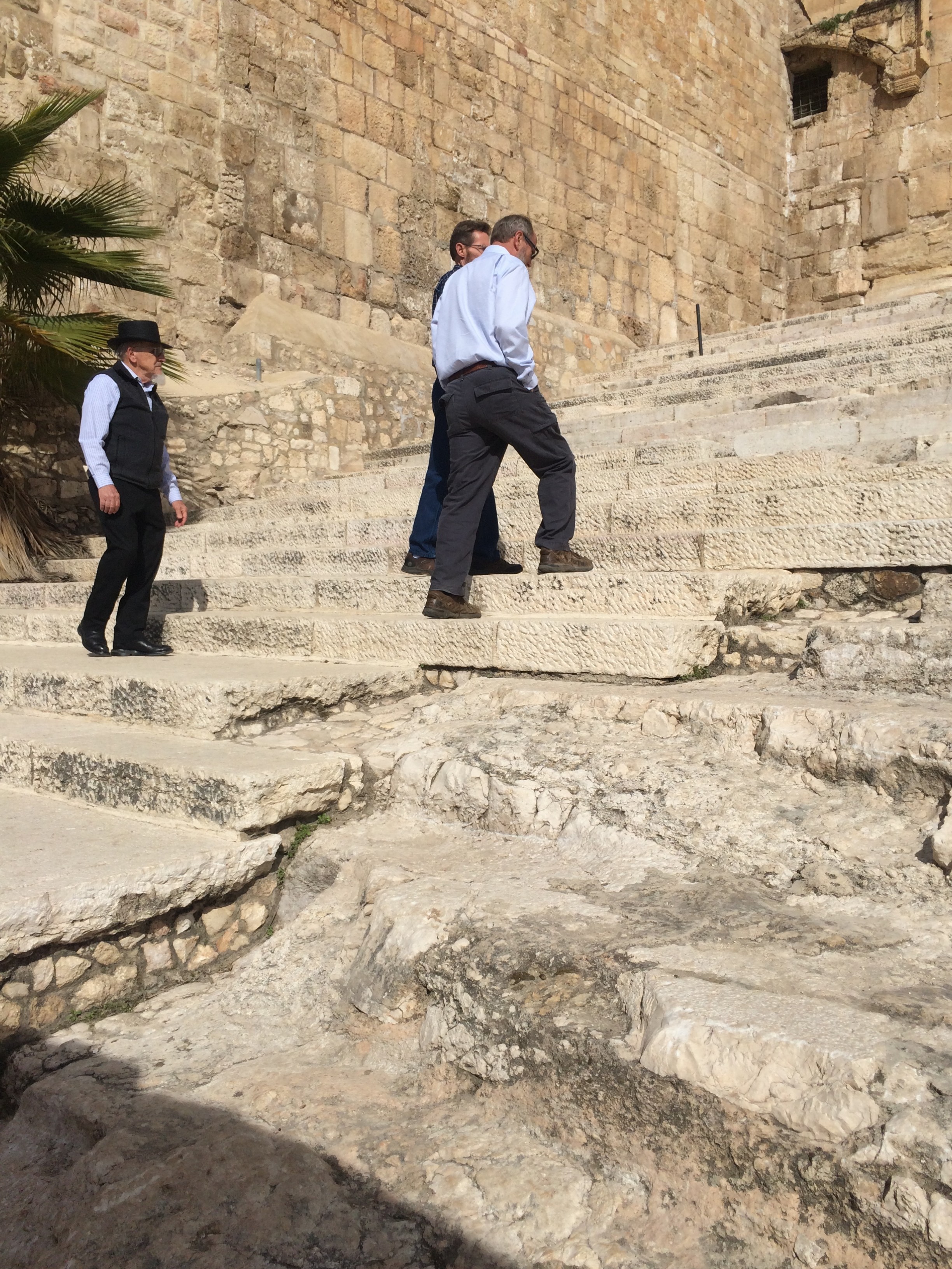 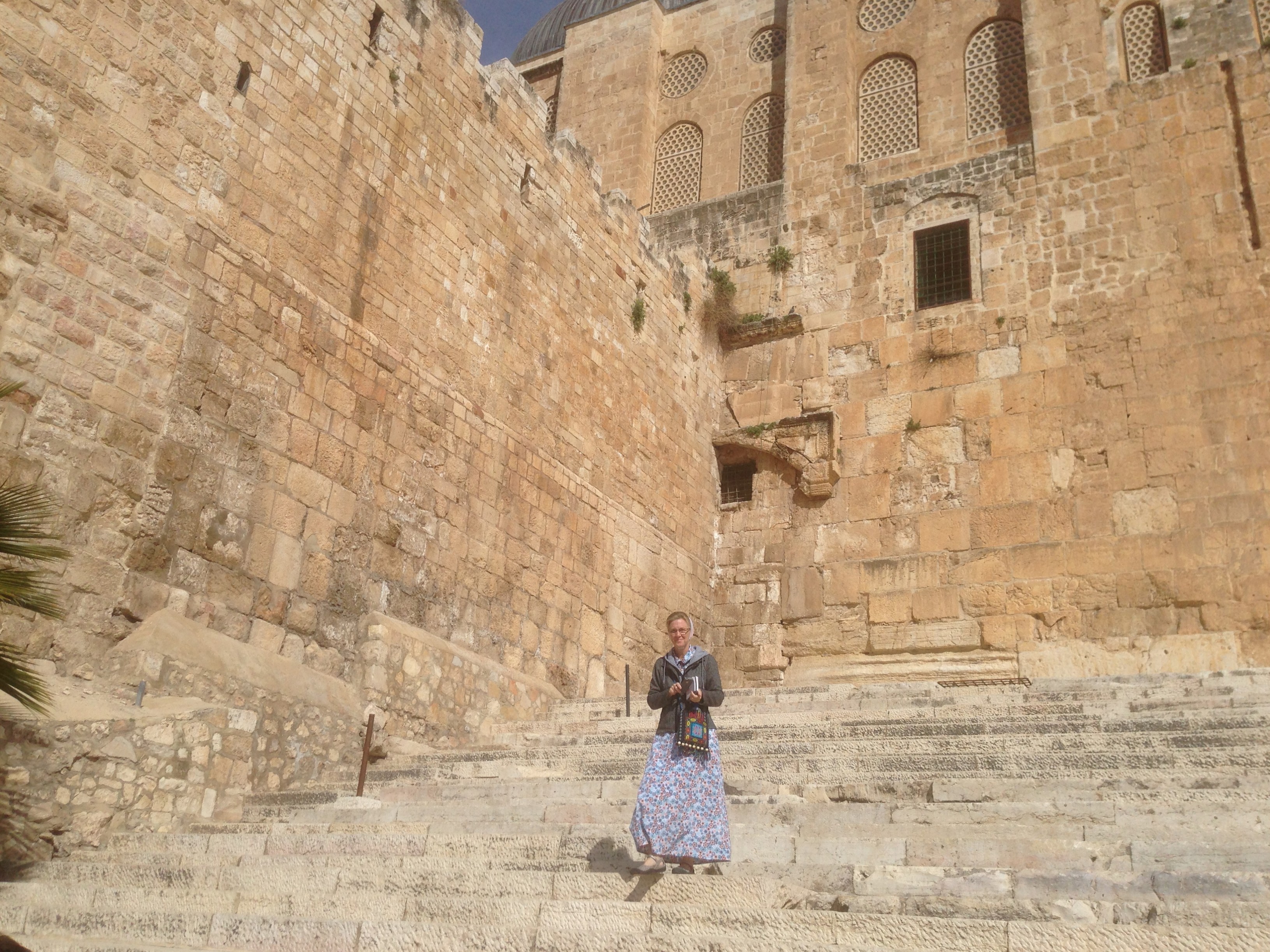 We can see some of the old steps, carved out of stone on the side of the mountain. The new ones are built in the same fashion the old ones were…uneven…so that worshippers were not able to rush up them. Instead they would have to slow down and think on their way to the temple.

The peak of the wall, in the first picture of this post, is called the pinnacle of the Temple. From here, the trumpets were blown. 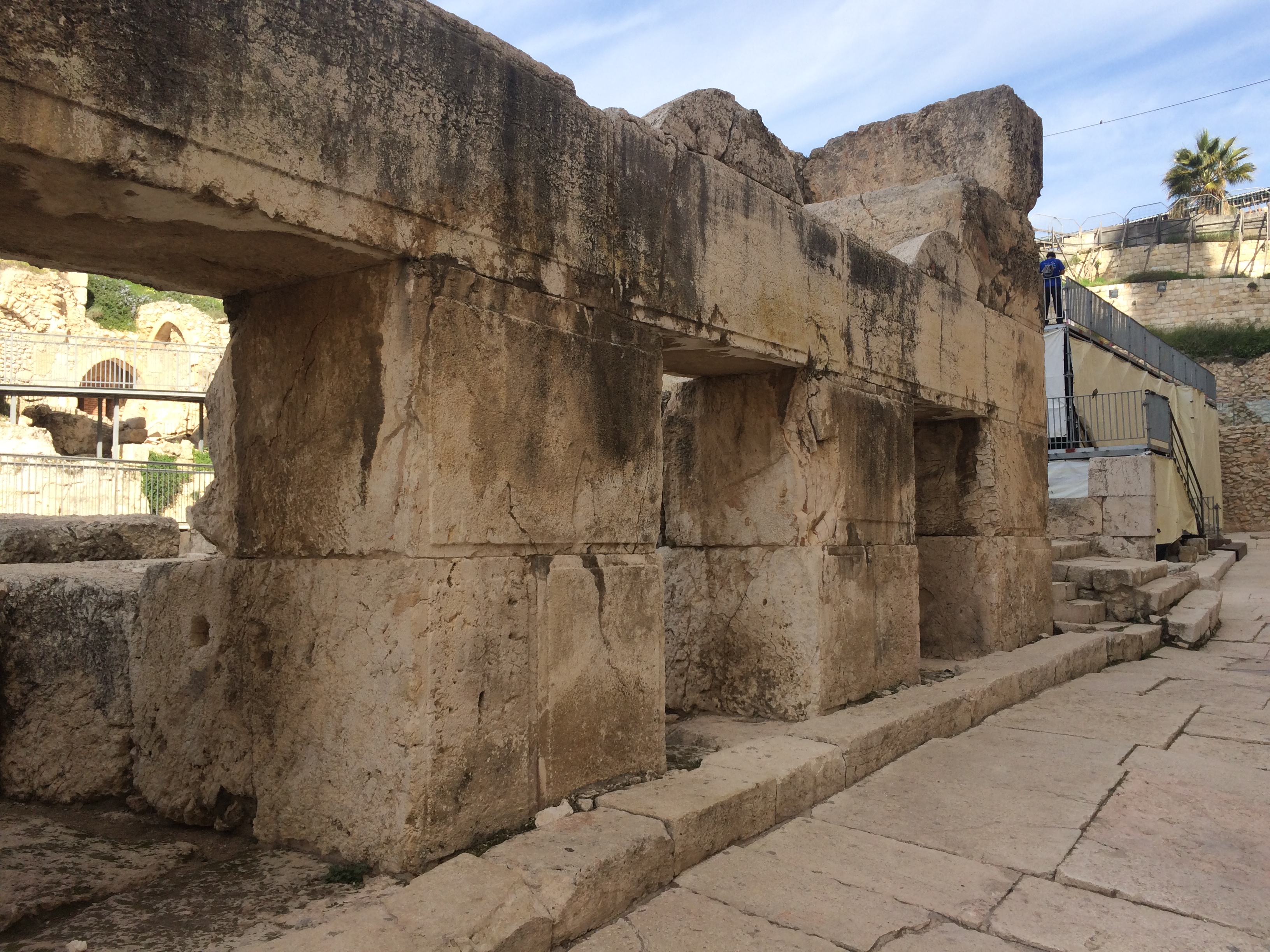 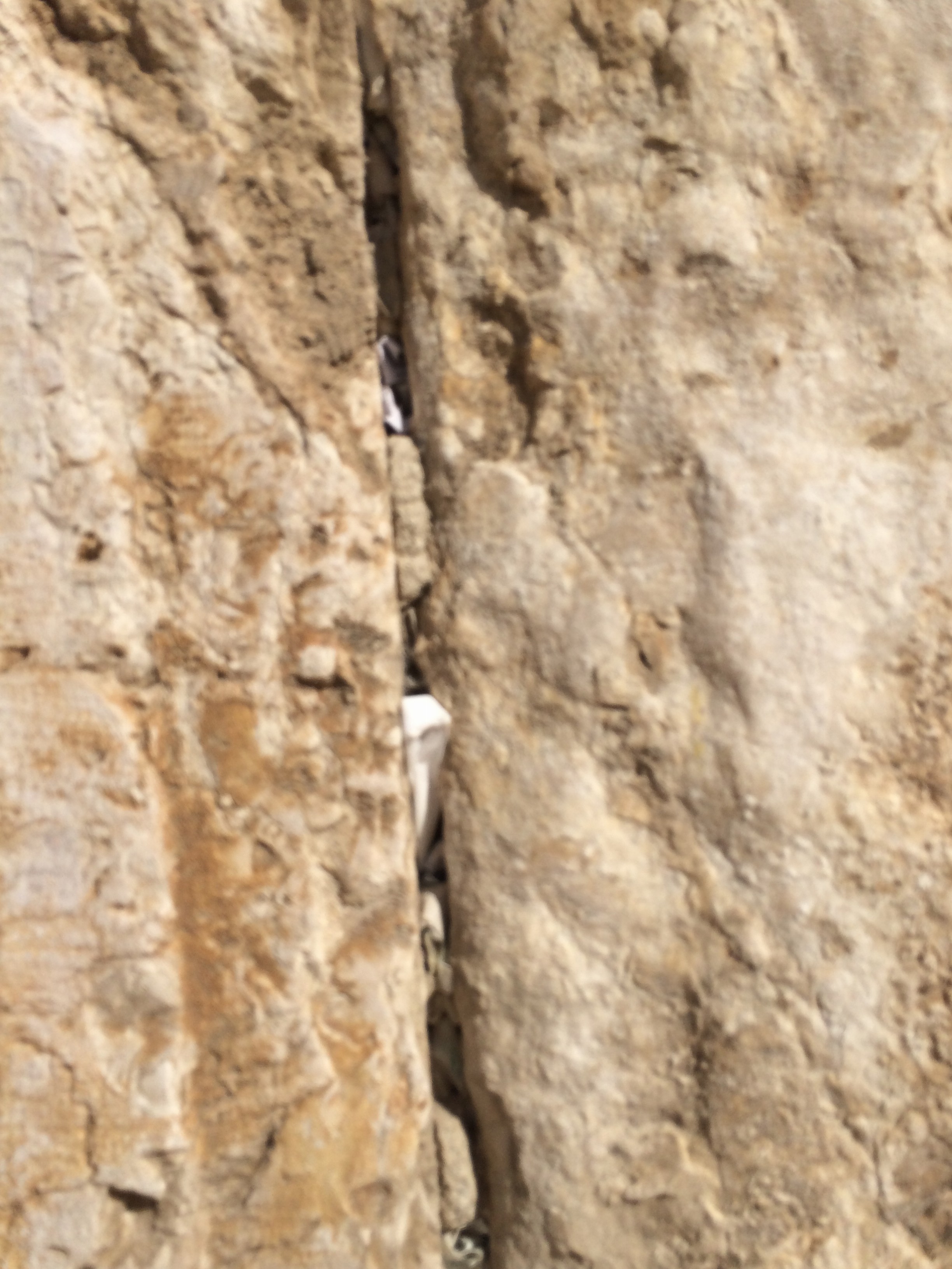 Little notes have been left in these walls, just as we saw in the Kotel (or Wailing Wall)  yesterday so Jews must come here sometimes to pray or meditate.

I thought this stop would be a little side stop but it turns out to be one of my favorite places! I’m not sure why. I love the visual that I will have now when I read of someone “going up to the Temple”…of all the multitudes of men and women who made the pilgrimage to Jerusalem and went up these steps. And I love the thought of Peter standing here, boldly preaching…

“Men and brethren, let me freely speak unto you of the patriarch David, that he is both dead and buried, and his sepulcher is with us unto this day.  Therefore being a prophet, and knowing that God had sworn with an oath to him, that of the fruit of his loins, according to the flesh, he would raise up Christ to sit on his throne; He seeing this before spake of the resurrection of Christ, that his soul was not left in hell, neither his flesh did see corruption.  This JESUS hath God raised up, whereof we all are witnesses.” Acts 2:29-32

“People ask me how I can smile. I think that it saves me, being able to smile.  Because otherwise I would cry endlessly.” Holocost Survivor

The stories that grab my heart most are those of survivors who, when they finally found themselves at the end of the war, came to realize that they were all alone in the world. Not a single one of their family members remained. They had lost children, parents, siblings, their spouse…every one.

I have lost a son. I cannot fathom losing everyone. And I know the heartache Zeke experienced during his long years in an orphanage with no family. No mama to ever kiss him goodnight or touch him…..no brother…no Baba…not a single living relative whom he knew anywhere. That’s what these survivors lived with for the rest of their lives.

No, it’s not the only hard thing or the worst kind of suffering ever. But it’s still hard. 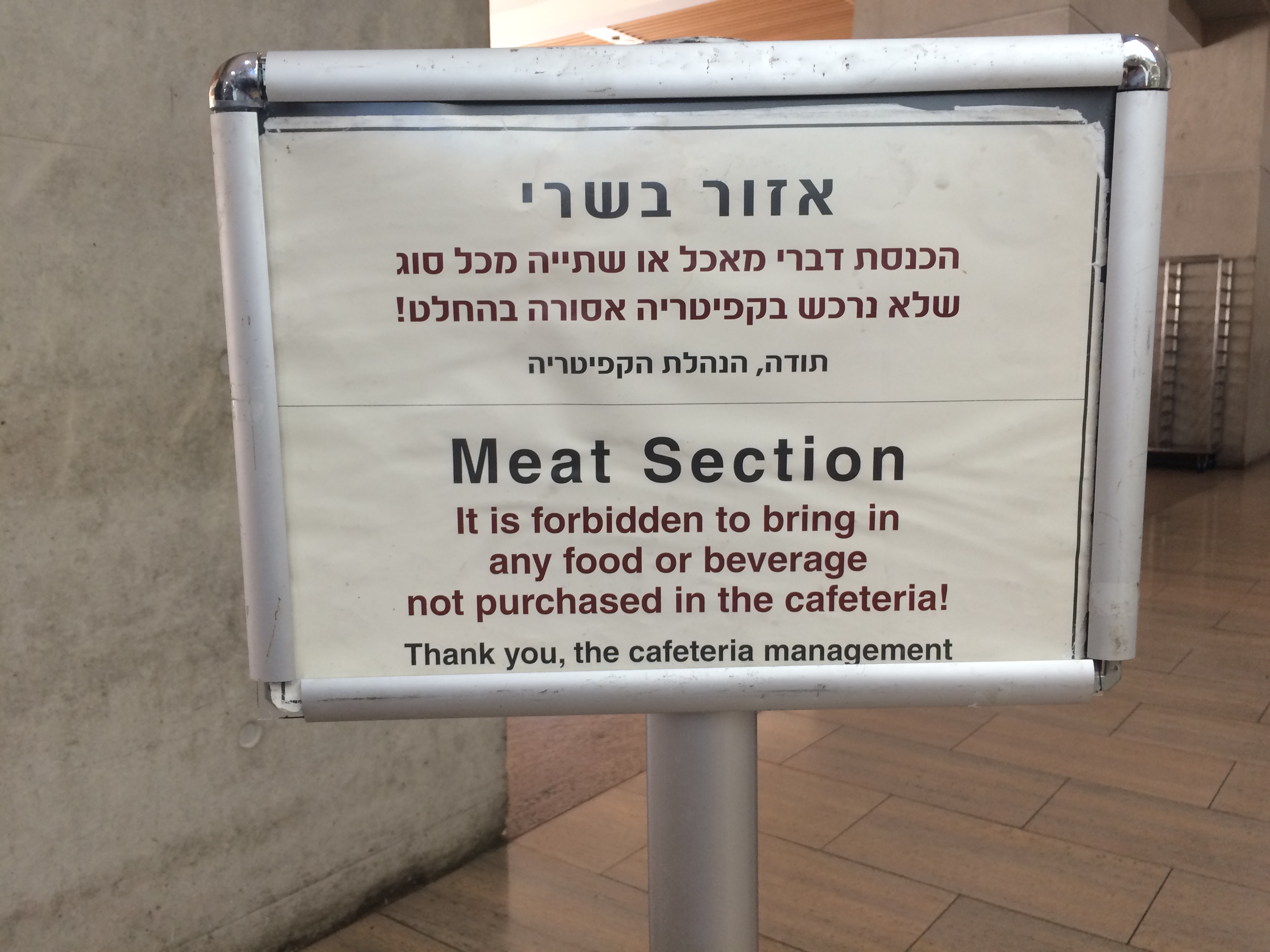 We eat lunch at Yam Vashem. I’m going to miss this hummus. I don’t know the name of most of what I eat but I love the hummus and the other thick sauces with all the fresh veggies.

I didn’t know that all of Israel would be kosher when it comes to food. I think it’s interesting that even the Jews who don’t keep all of the old law still eat kosher and I wonder why that is?

Opal buys me a book here and it looks wonderful. It’s called Israel Then and Now and has pictures with overlays to help one see what a site looks like now compared to what it would have looked like in Bible times. I told her earlier today how difficult it is for me to picture things as they were so it was a very thoughtful gift! 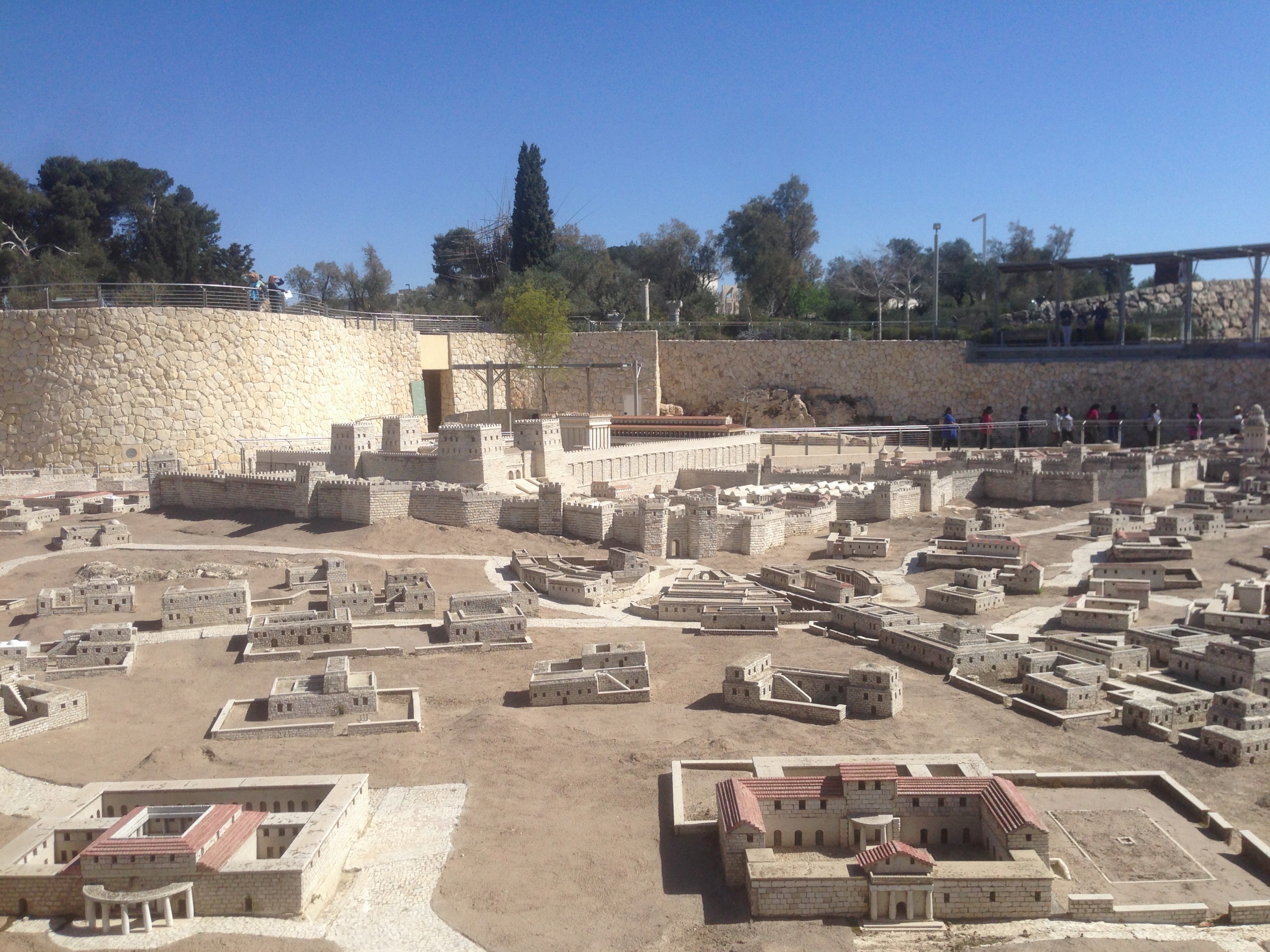 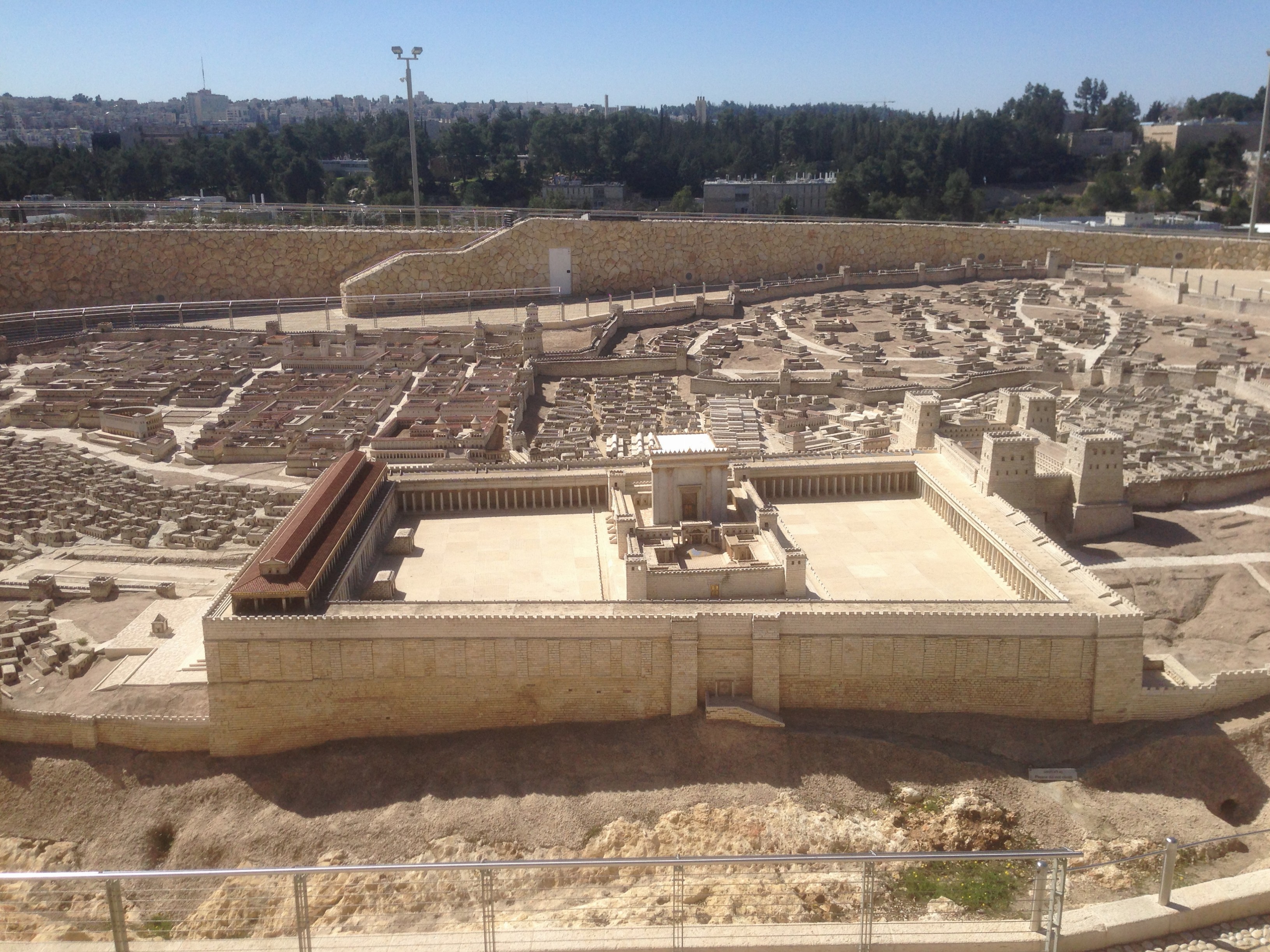 I’m not sure of the name of the next musuem but we are here to see a large model of the city of Jerusalem as it would have looked when Jesus was here. Because we have already visited so many sites, this model is very helpful in putting it all together in my mind. It also makes the elevation changes more evident. The Mount of Olives is steep. It would be quite a climb down and out of the Kidron Valley. It’s a long walk all the way to Caiaphas’s house and then to Pilate, to Herod, back to Pilate and finally to Calvary. And not much is flat here. Pretty much everywhere you walk is either up or down.

We can see the tunnels we went through, the pools, and the City of David all on the model. The geographical fog that I feel like I’ve been walking in the past 2 days clears a little.

As we drive to Mea Shearim, Nibeal points out places of interest such as Kensset which is the Jewish Parliament, the Ministry of Foreign Affairs, and the Supreme Court. 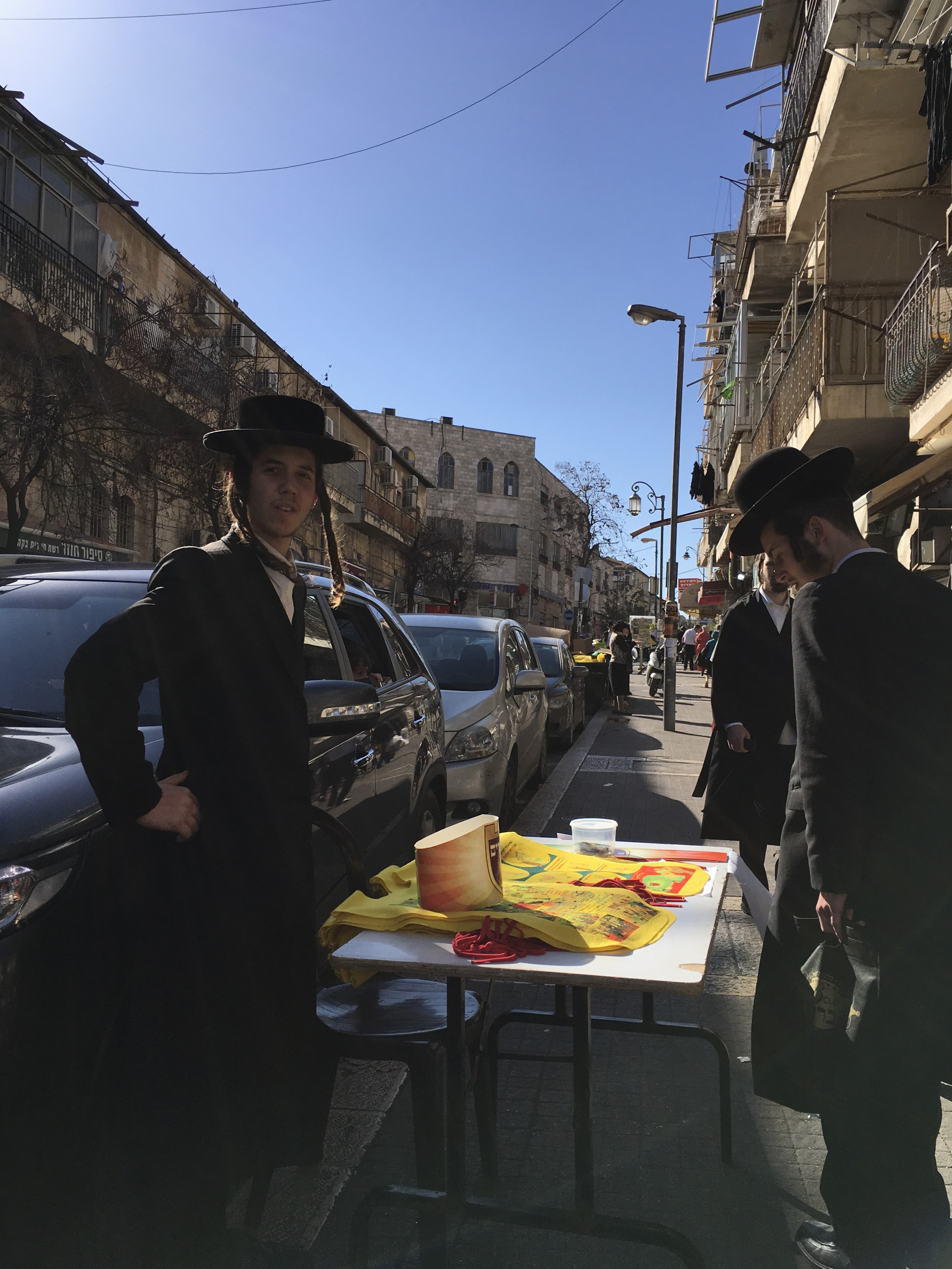 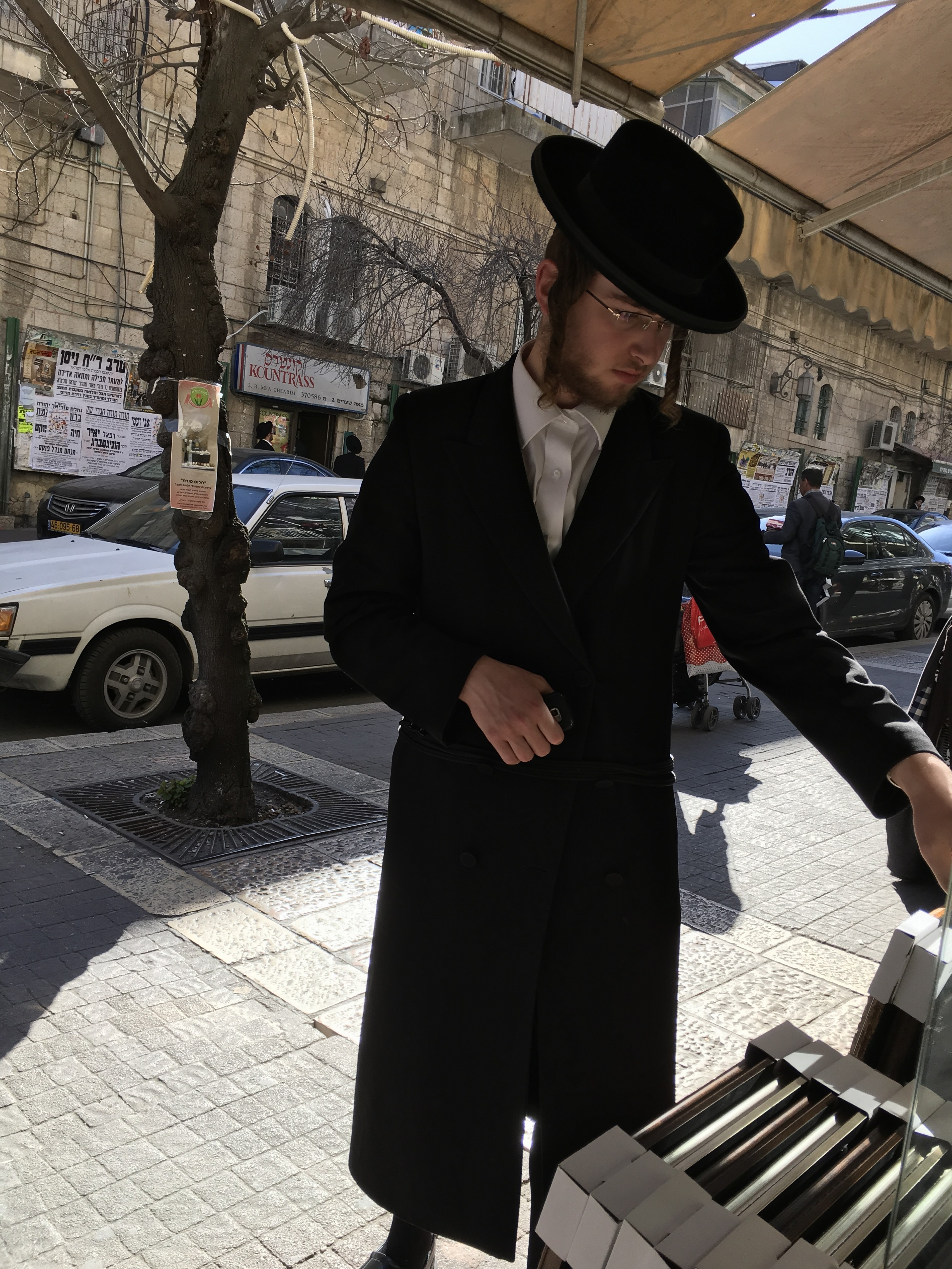 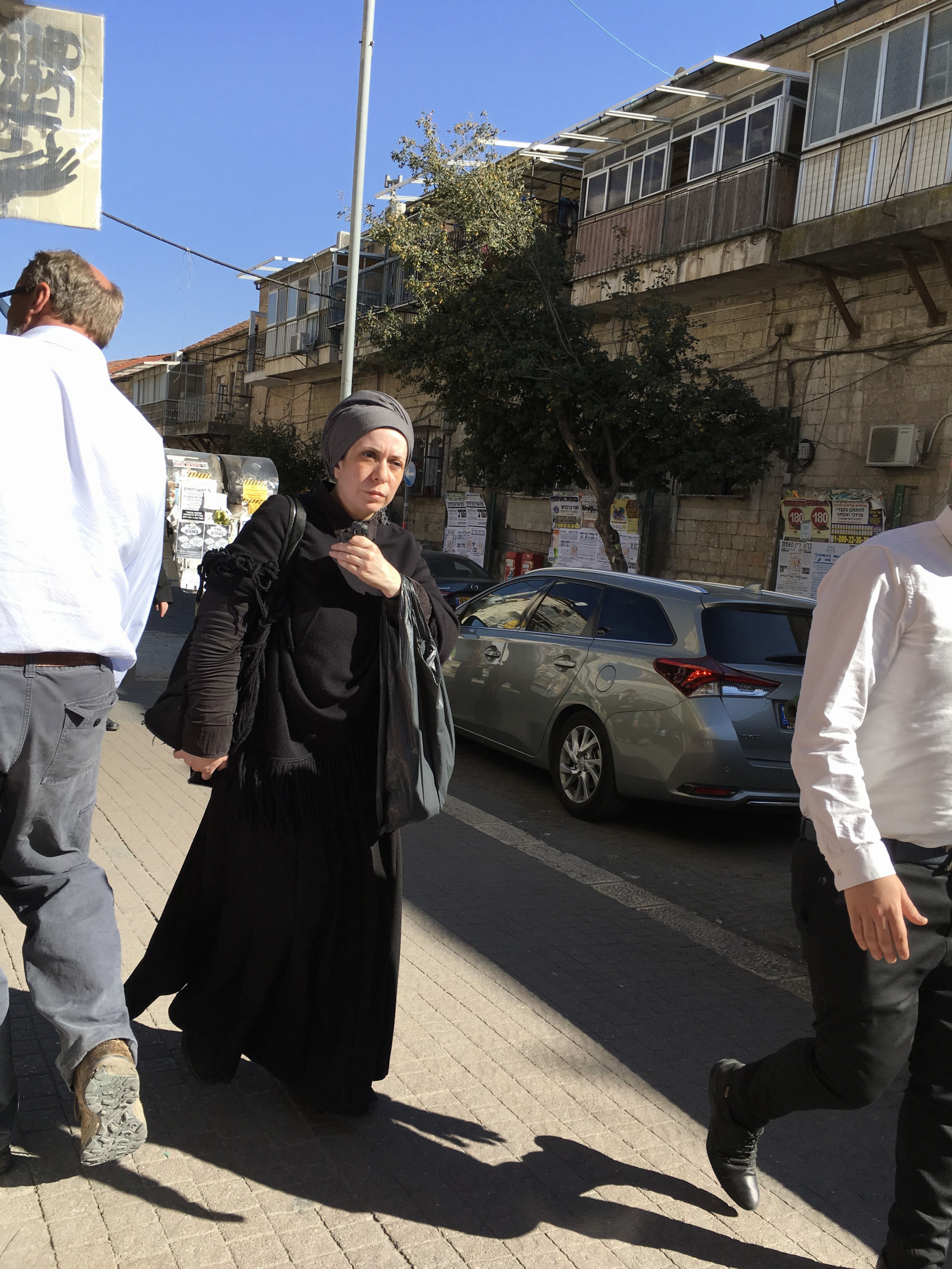 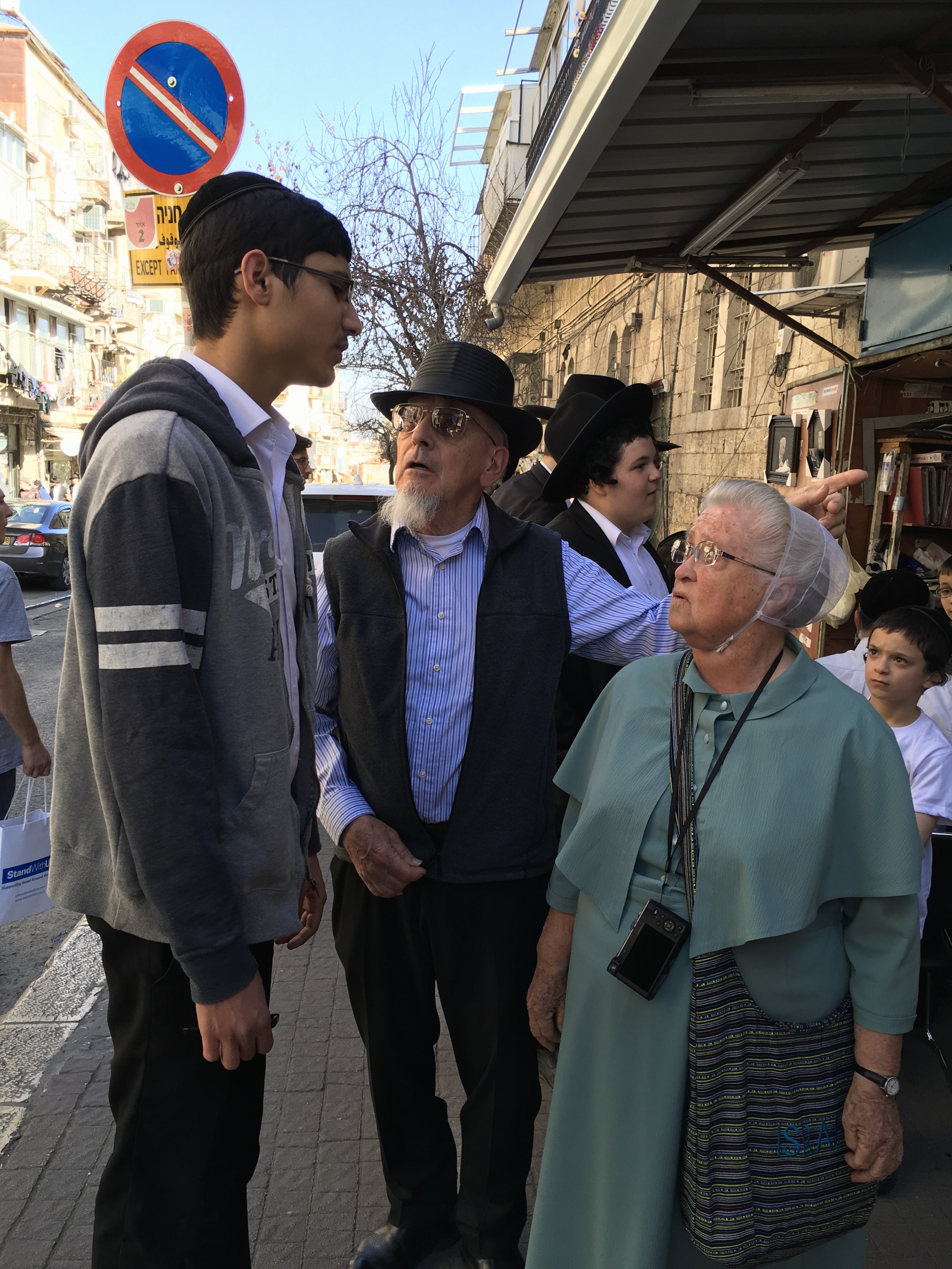 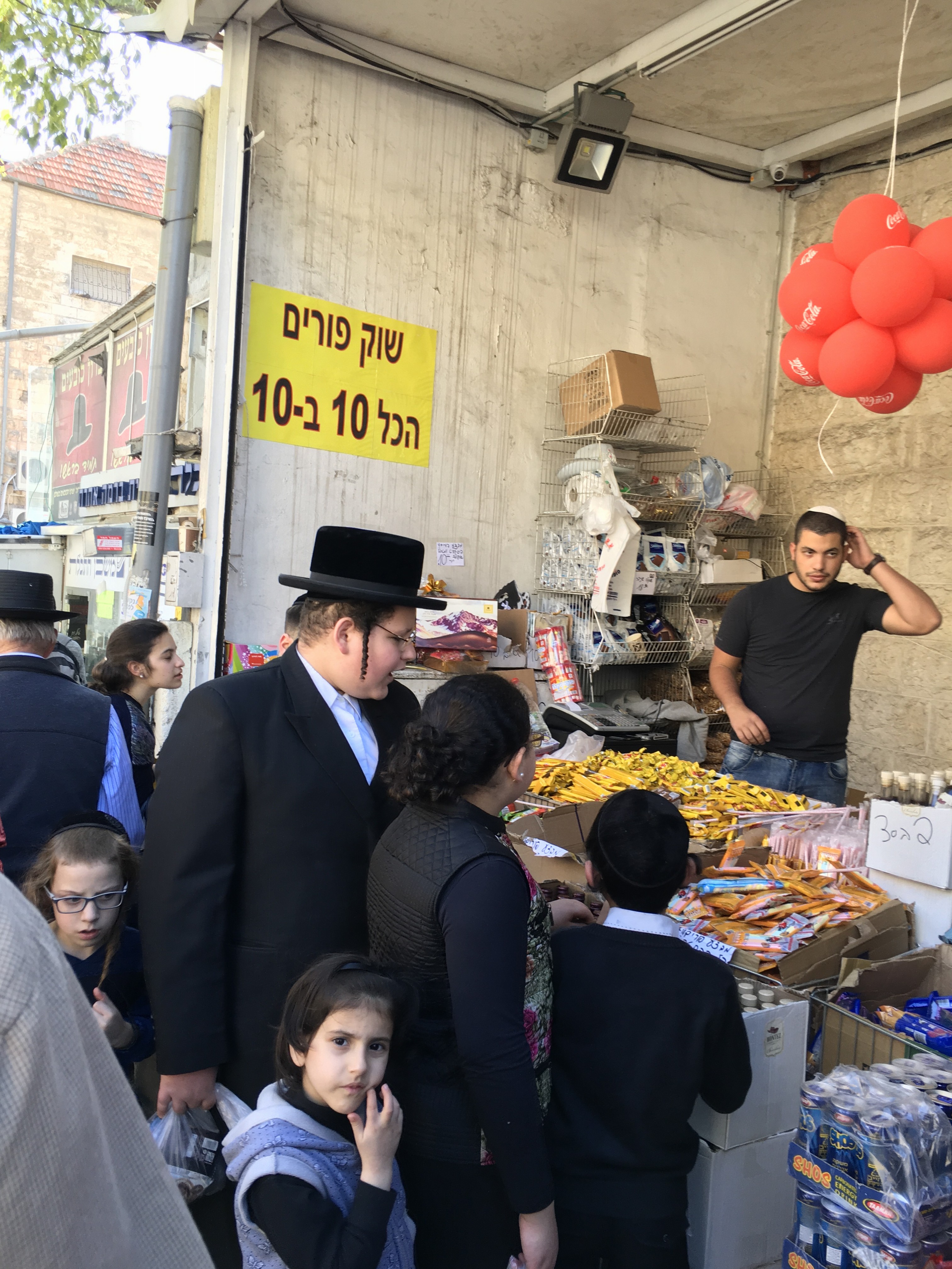 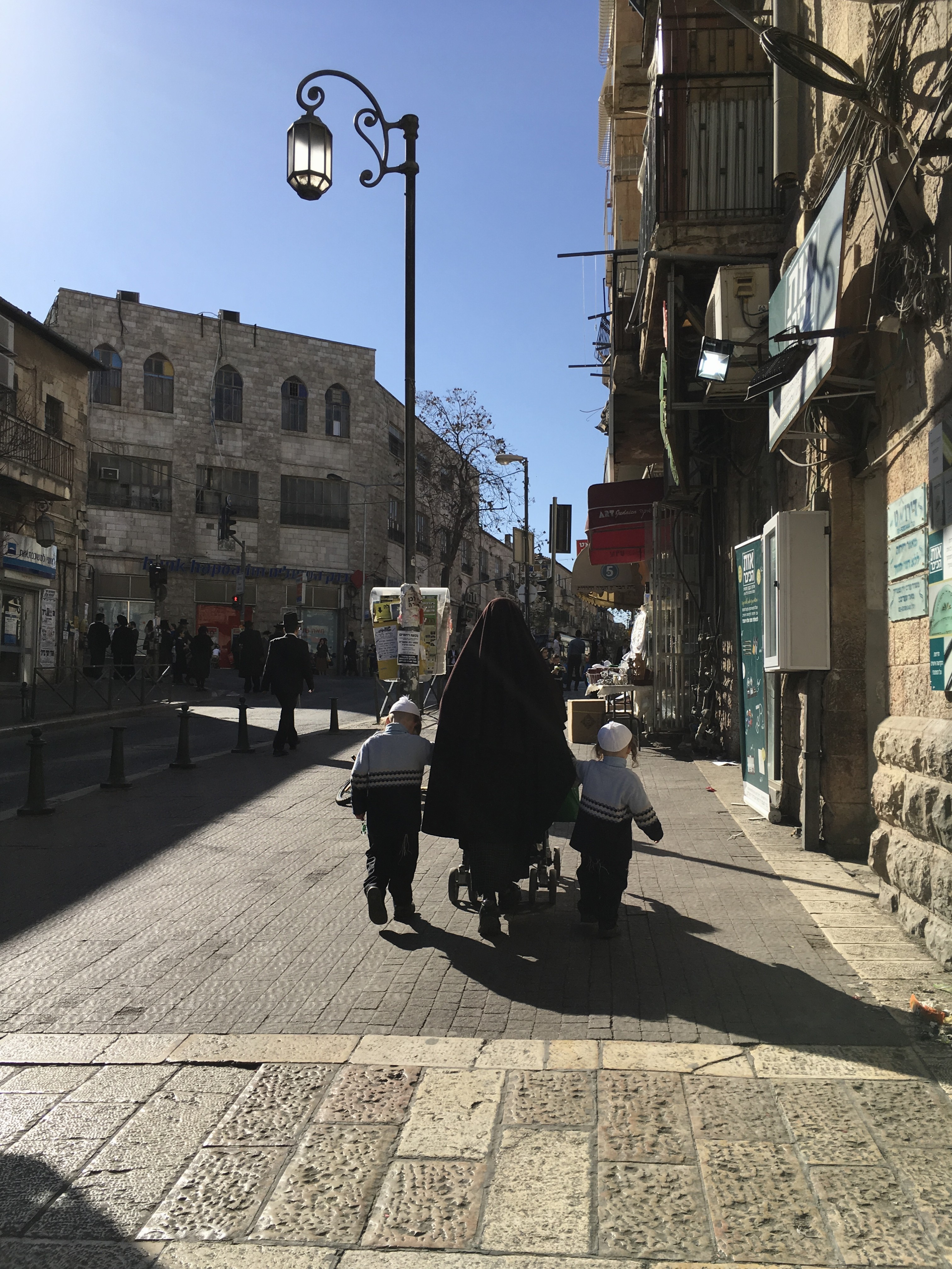 The oldest Orthodox Jewish section of Jerusalem. Nearly everywhere we have been on this trip, we have seen other tourists but here we are the only ones…everyone else is an Orthodox Jew. Nibeal tells us to be back at the bus in 45 minutes and turns us loose. Dwayne and I walk around, weaving in and out among the busy crowds. Most of them seem to be in a huge hurry, walking fast and with purpose. Up and down the streets we see men standing in pairs, talking. Women push strollers, a man helps his son try on yarmulke, a boy who looks to be about 12 goes racing down the sidewalk on his bycycle, narrowly missing us. These folks are not always receptive to visitors and one shopkeeper completely ignores us when we ask him a question. But another is very friendly and it is interesting to see the community and get a little glimpse into their world. One lady approaches us. She is holding the hand of her little girl and tells us with a big smile that she is from America too.

I promise I wasn’t rude when I took these pictures.  I just held my Ipad at waist level and clicked occasionally.

When I look up the spelling I see the definition of this place is: 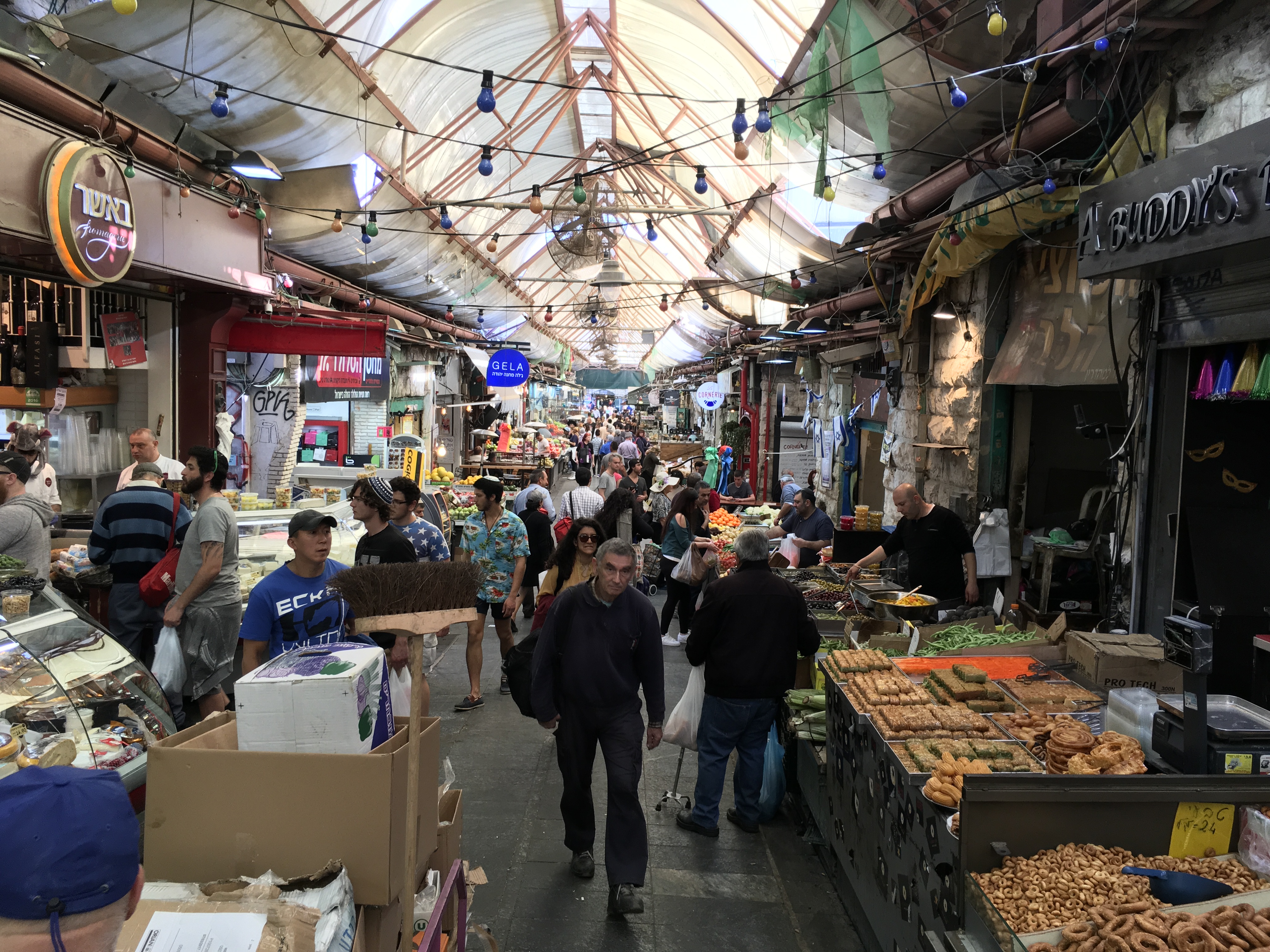 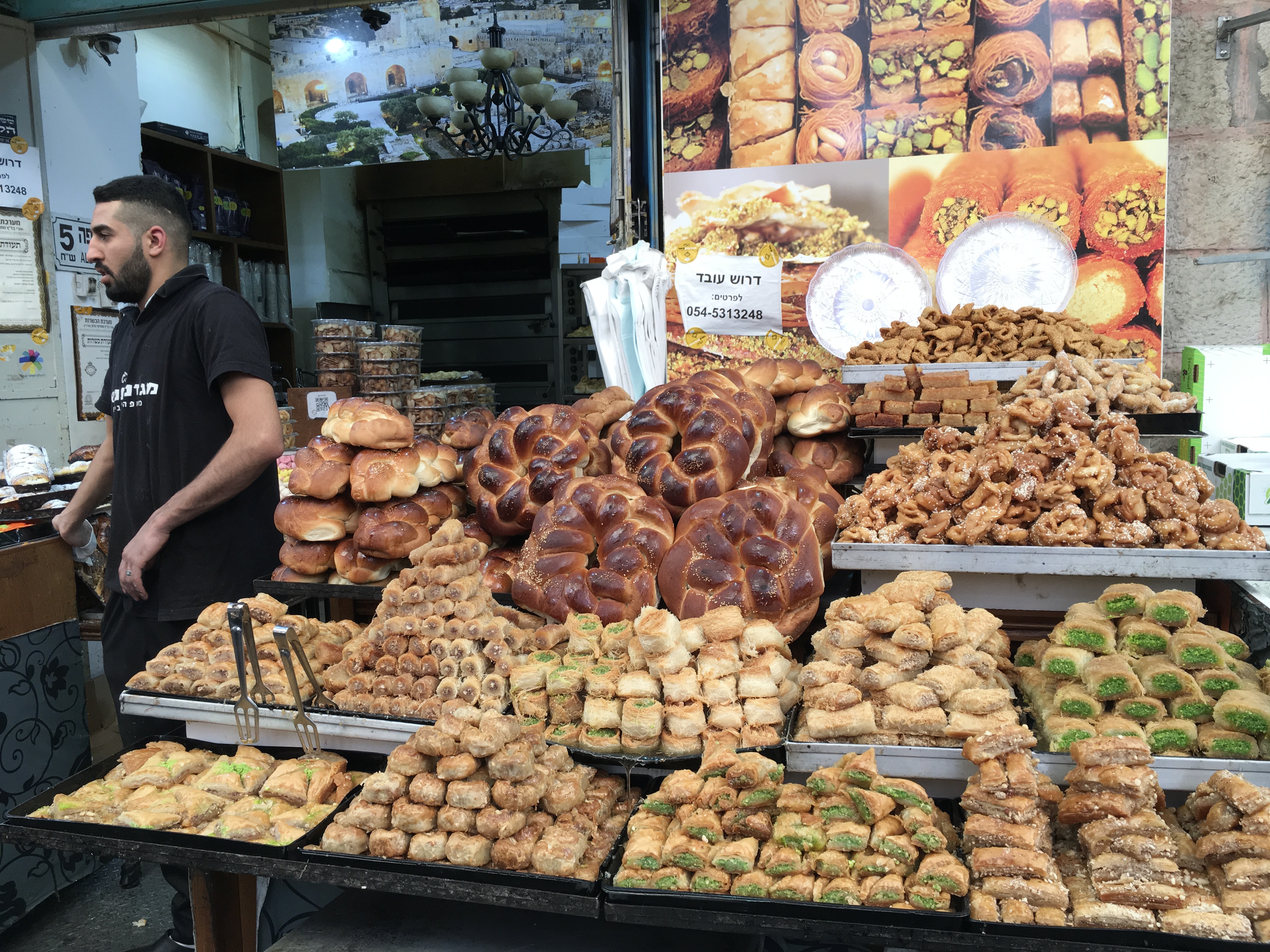 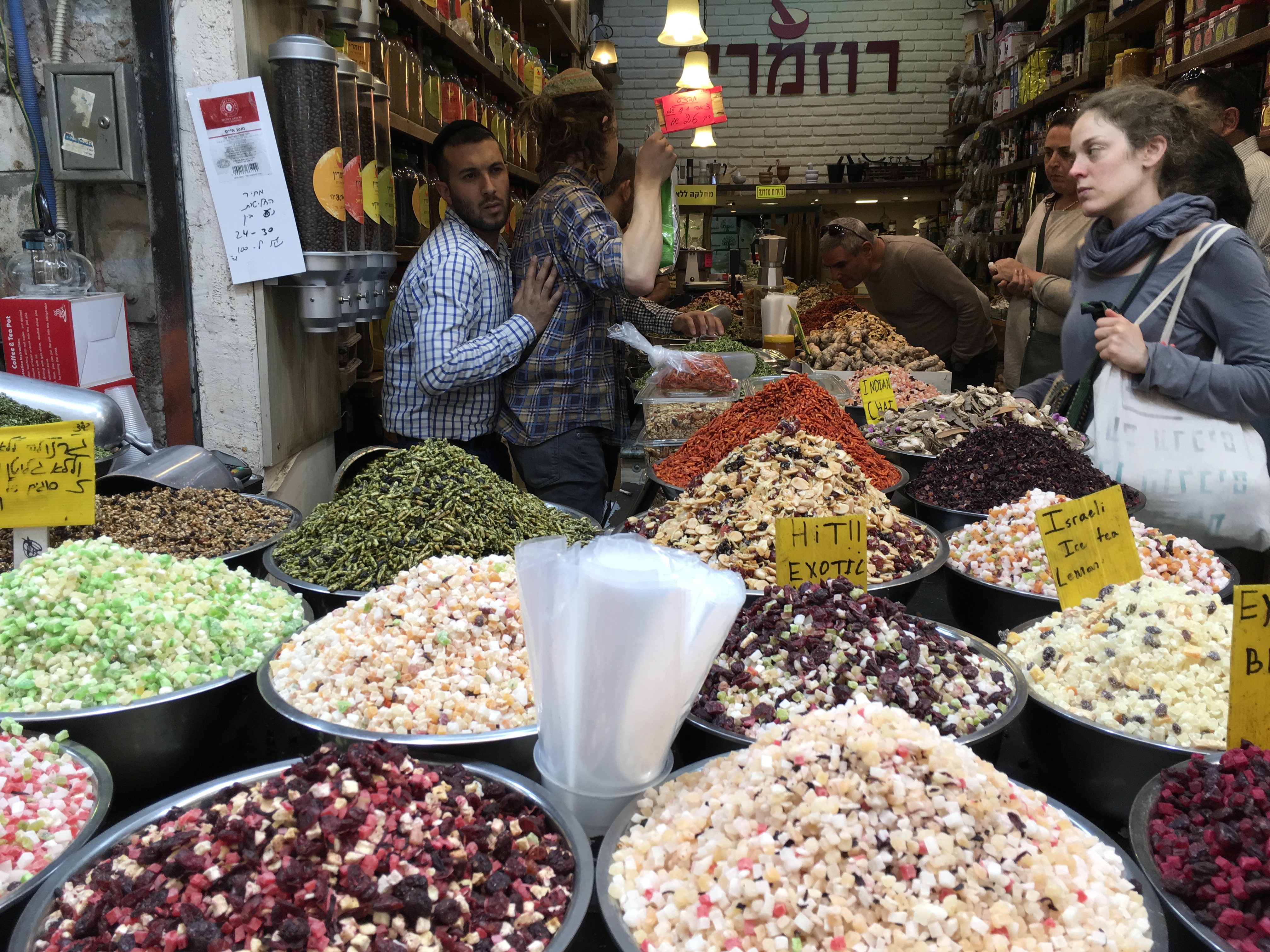 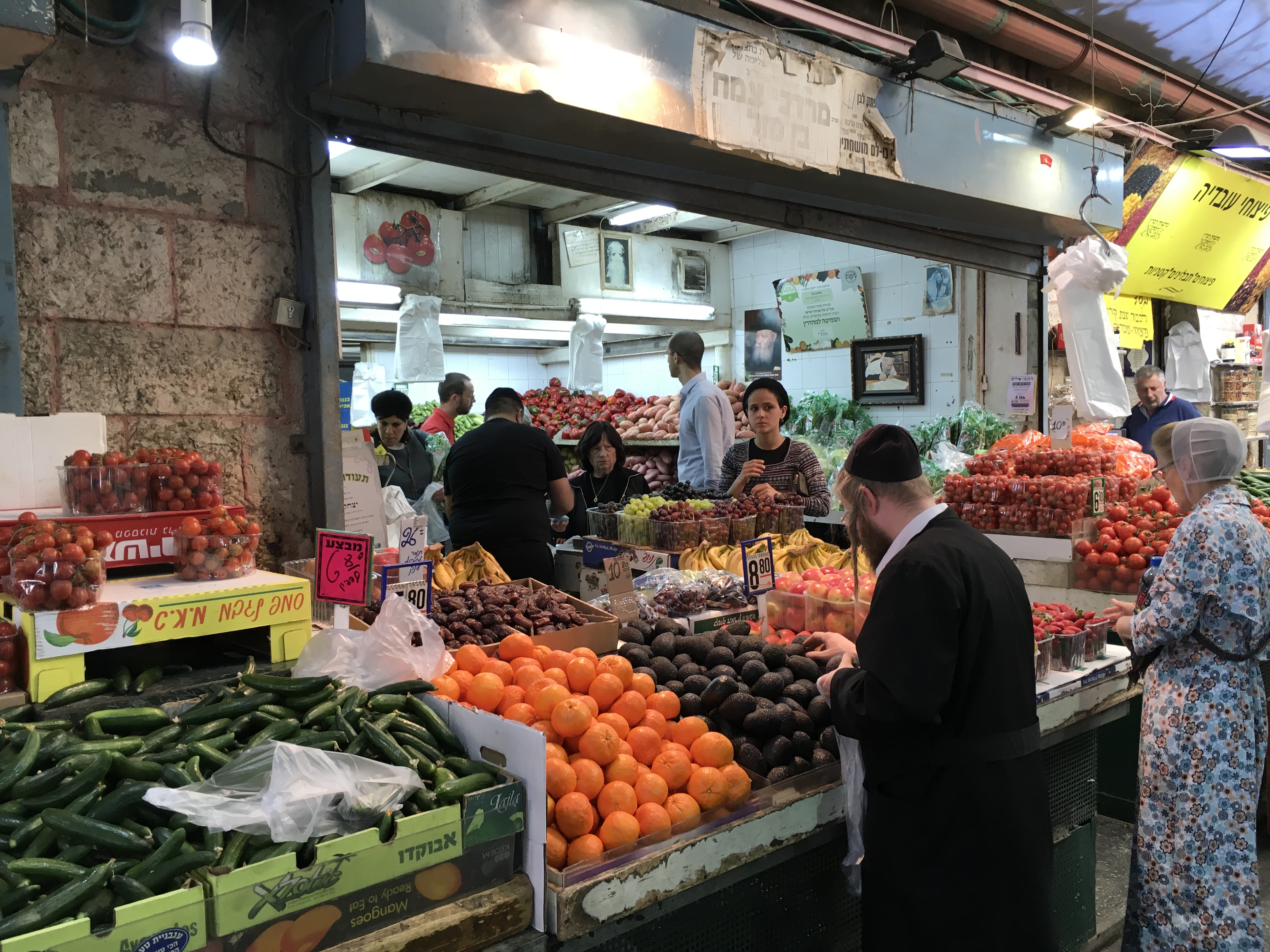 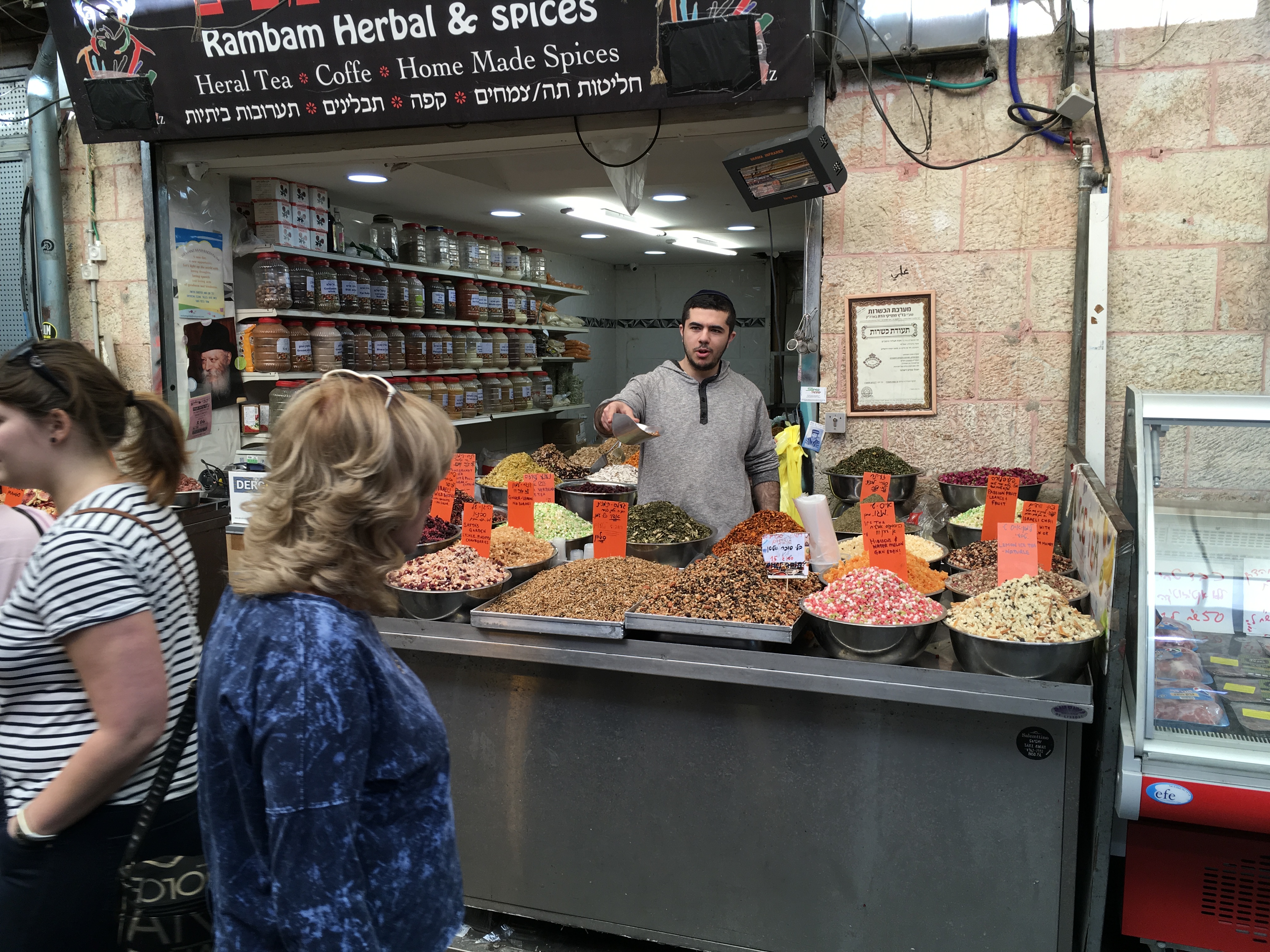 That’s just what it is! I love it! We pick up some strawberries and grapes to share at supper and I grab a bag of pita breads. I know they won’t keep but they’re only 10 shekels and they’re sooooo good.

Heather buys some pj pants. She gives the guy a 20 dollar bill and he gives her 25 shekels back. It gets confusing 🙂 I’ve been having so much fun with Heather and Megan, Lloyd and Opal’s granddaughters. Young people add so much spice to life! 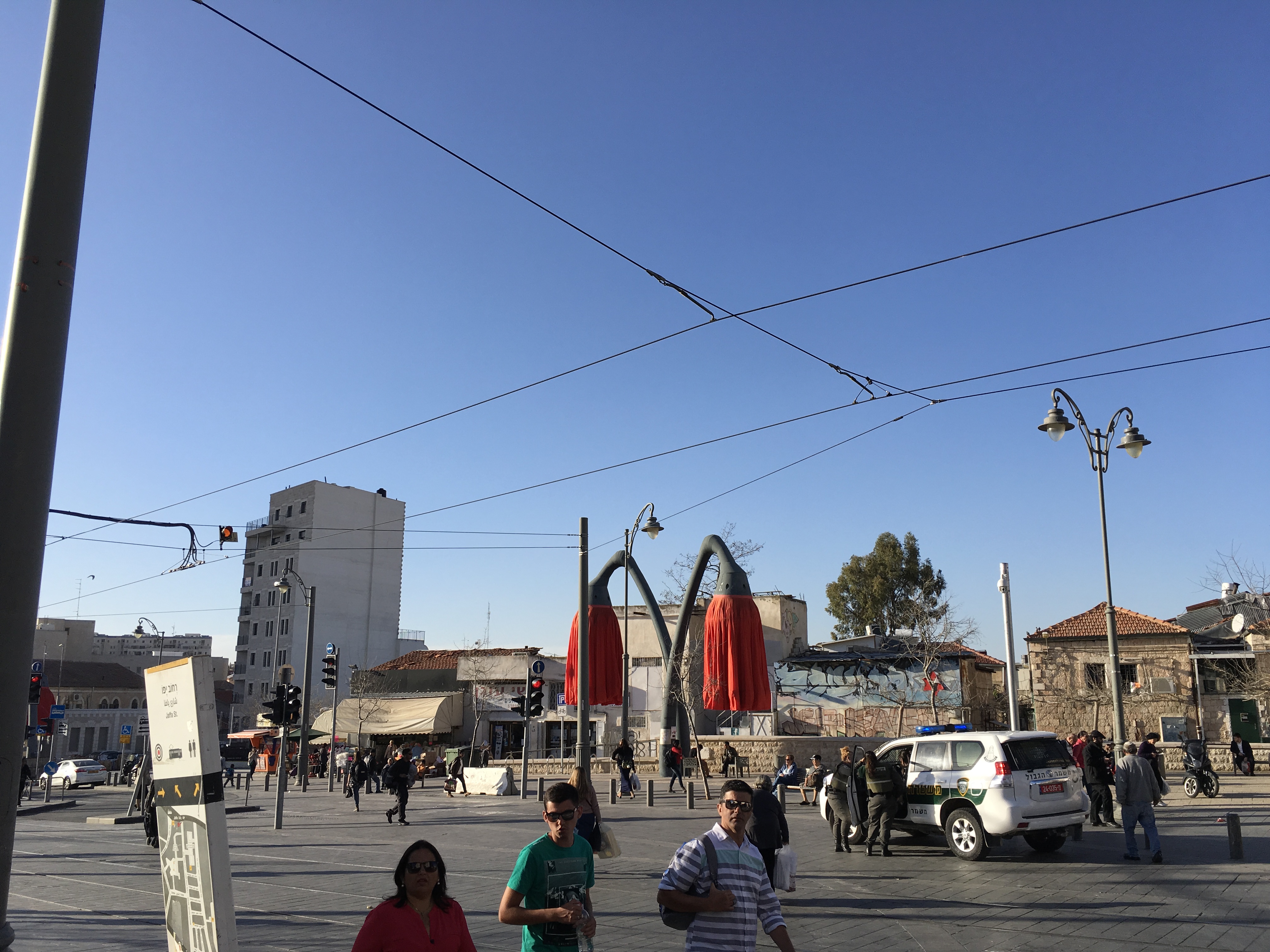 Heather and I are trying to figure out why two ladies skirts are hanging by the market. We finally realize it is artwork and supposed to be a flower. I think Nibeal is rolling his eyes at us. 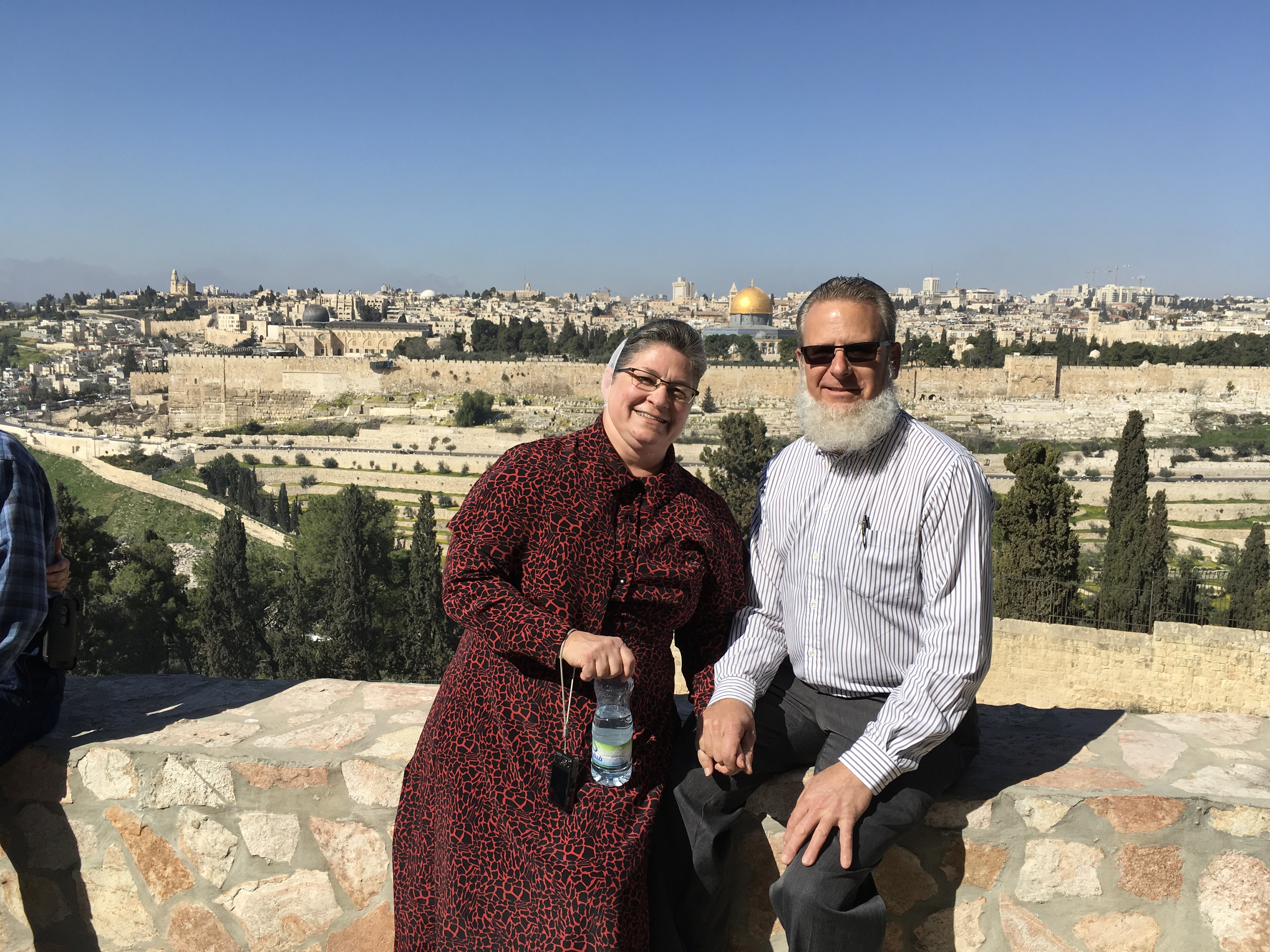 I’ve been trying to include a picture of each couple on our trip as I go along and I think I missed these folks.