We’re off bright and early, standing in line before 8:00 to enter the Temple Mount. It’s quite a deal. Arab men rummage through my purse and wave me through the security scanner while Israeli guards stand watch. I see a sign from the Rabbi, strictly forbidding orthodox Jews from entering. 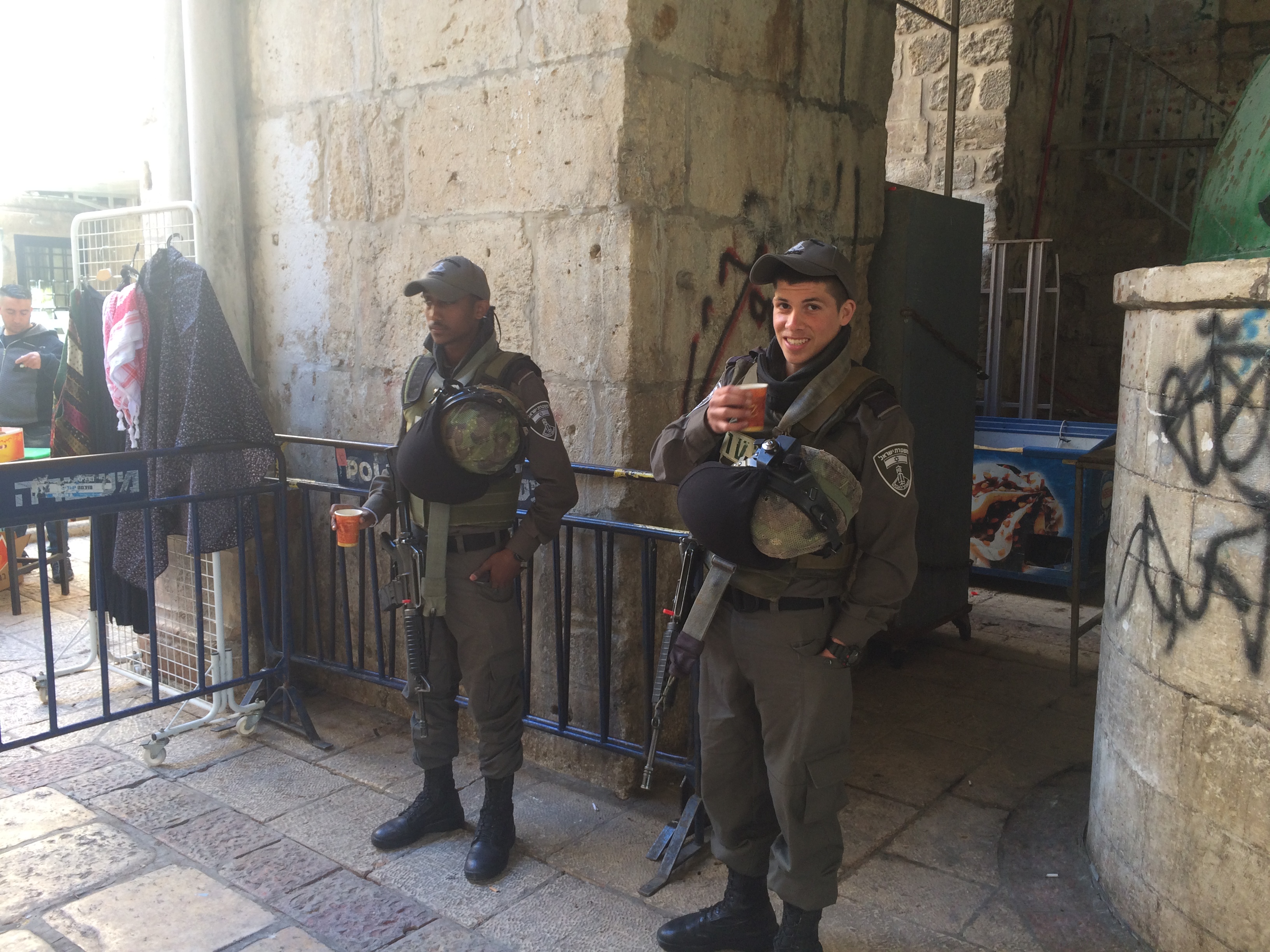 Honestly, I spend 50% of my time here bewildered. It takes me until noon every day to get my bearings about where exactly I am. Each day we are in a different area and some mornings I am so exhausted. About noon my sluggish brain perks up and I feel good. Usually by that time I can sort of figure out where we are. Side note…I am directionally challenged 🙂

I have seen a bazillion pictures of Israel over the years but I’m still totally unprepared at each stop. The reality is so very different than what a 4×6 protrays.

This same thing happened when we visited Haiti a few years ago. I would put the camera up to take a picture, look at the viewfinder, and think to myself, “No, this isn’t a good picture. This just looks like every other picture of Haiti I’ve ever seen”. Then I would put my camera down, look around at the real life, panoramic view and try again, only to have the same thing happen.

Pictures are wonderful for memories but they rarely capture the wholeness of a scene. 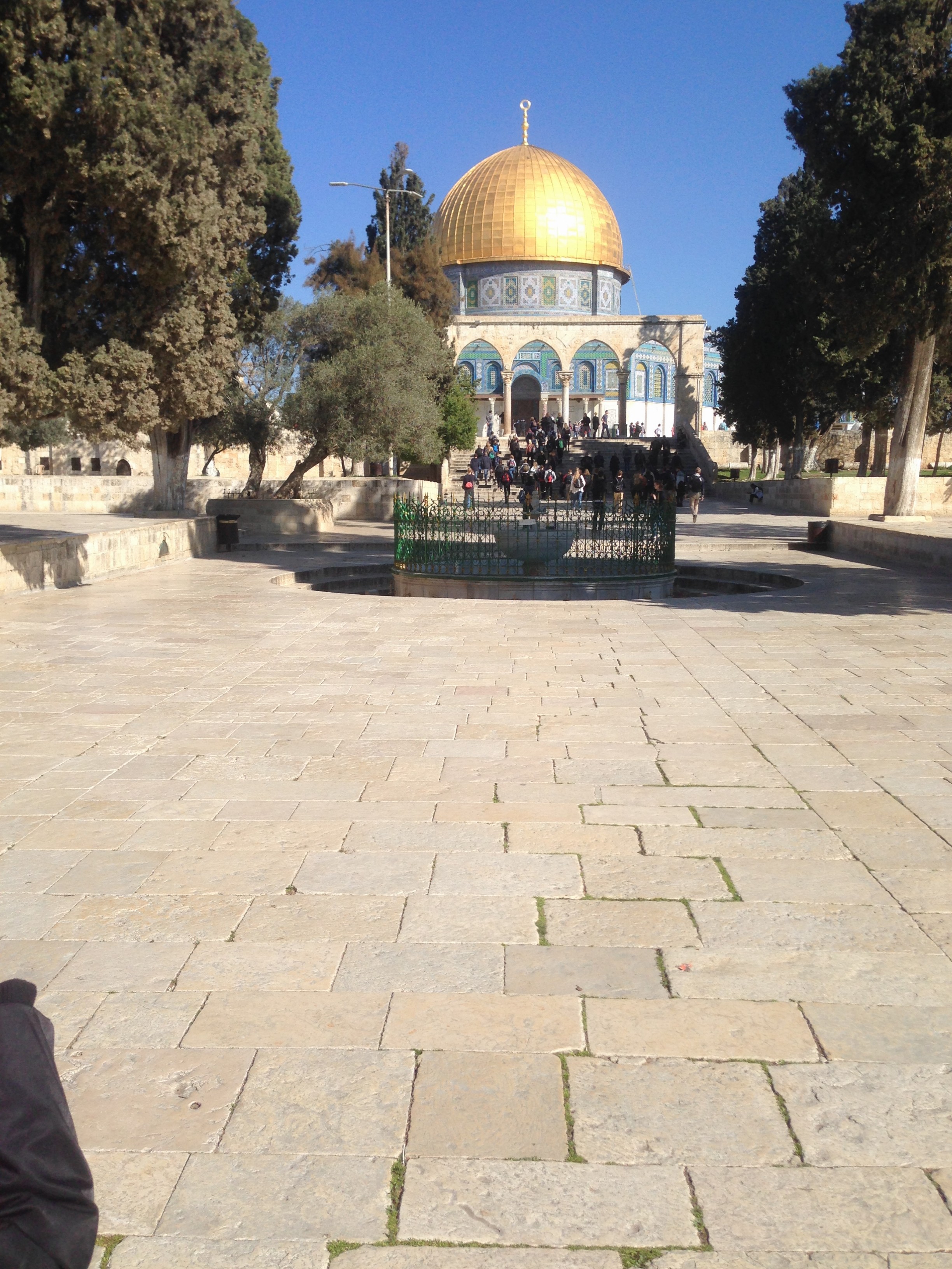 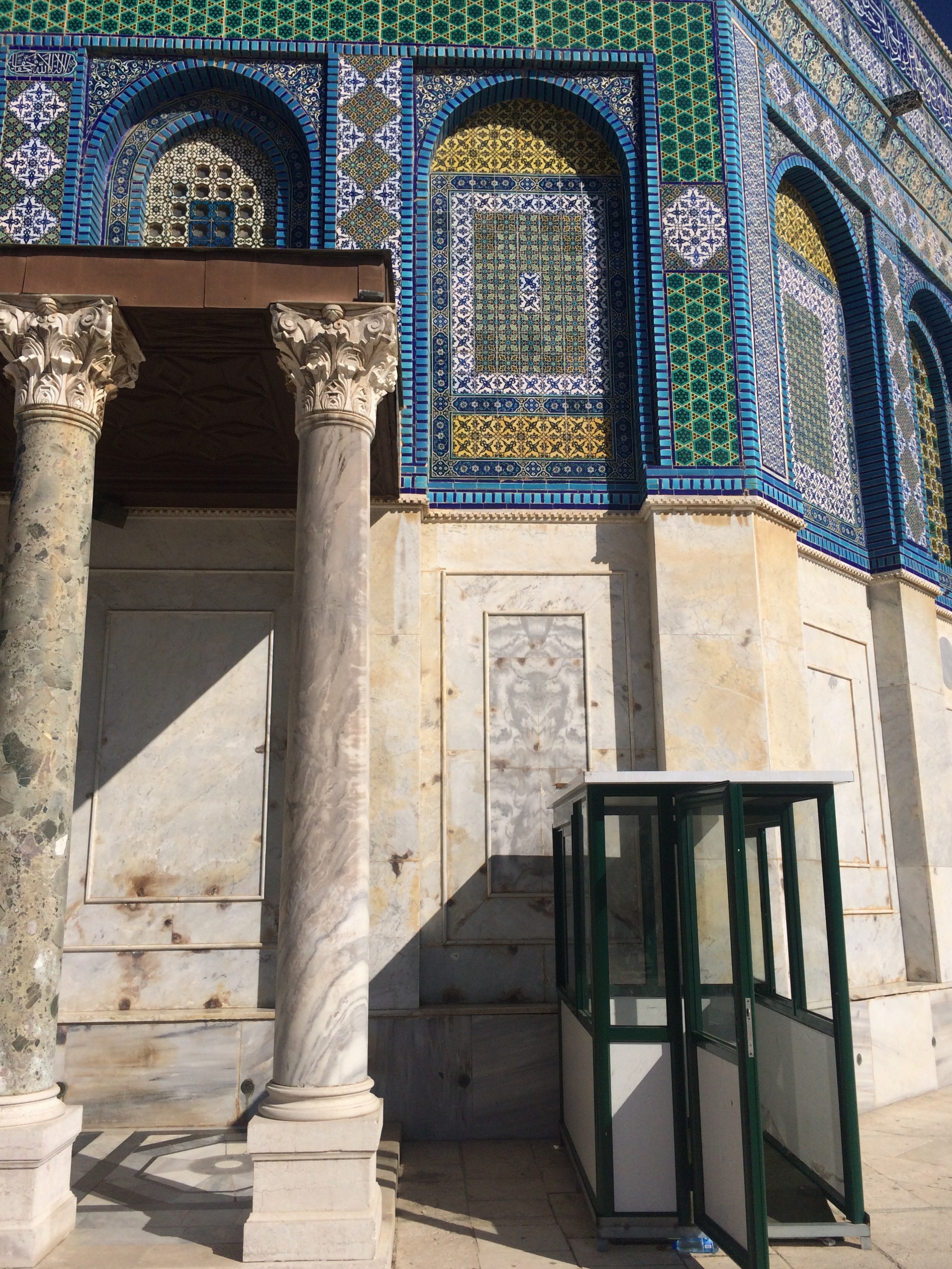 Pages could be written about the Temple Mount but I’ll just include a couple of things I didn’t know, or at least had never really thought about.

# 1. This building was built in the 7th century.

So just FYI, that basically 700 years BEFORE Columbus sailed the ocean blue.

I can grasp  the fact that *events* happened centuries ago but it’s hard to look at a *building* and comprehend that it has been here that long.

#2. Jews believe this mountain is where Adam was created, where Adam built an alter, where Able offered his sacrifice to God, and where Jacob dreamed of the ladder going to Heaven.

#3. It’s a big place up here. There’s tons of extra room even with the two huge buildings. 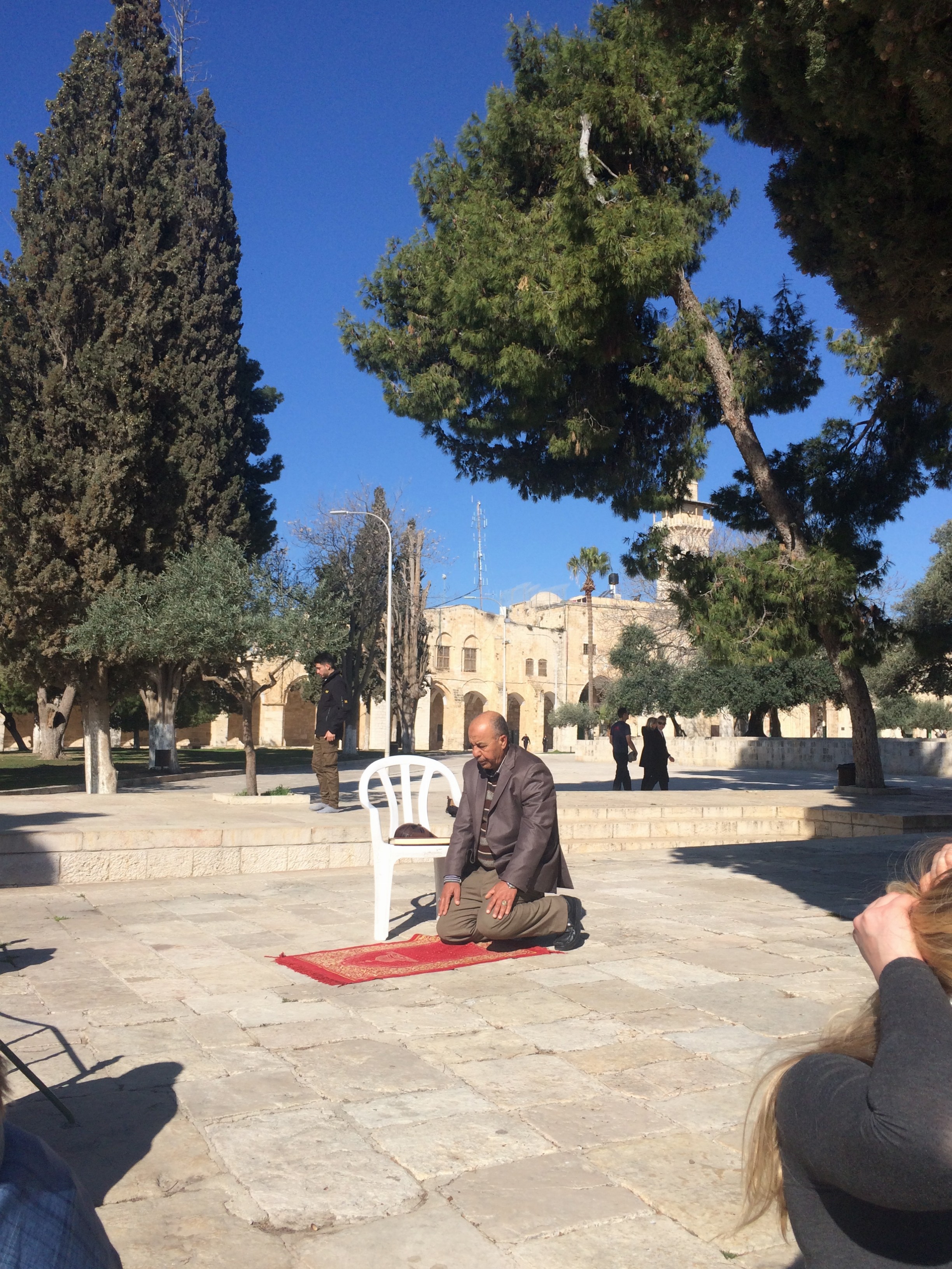 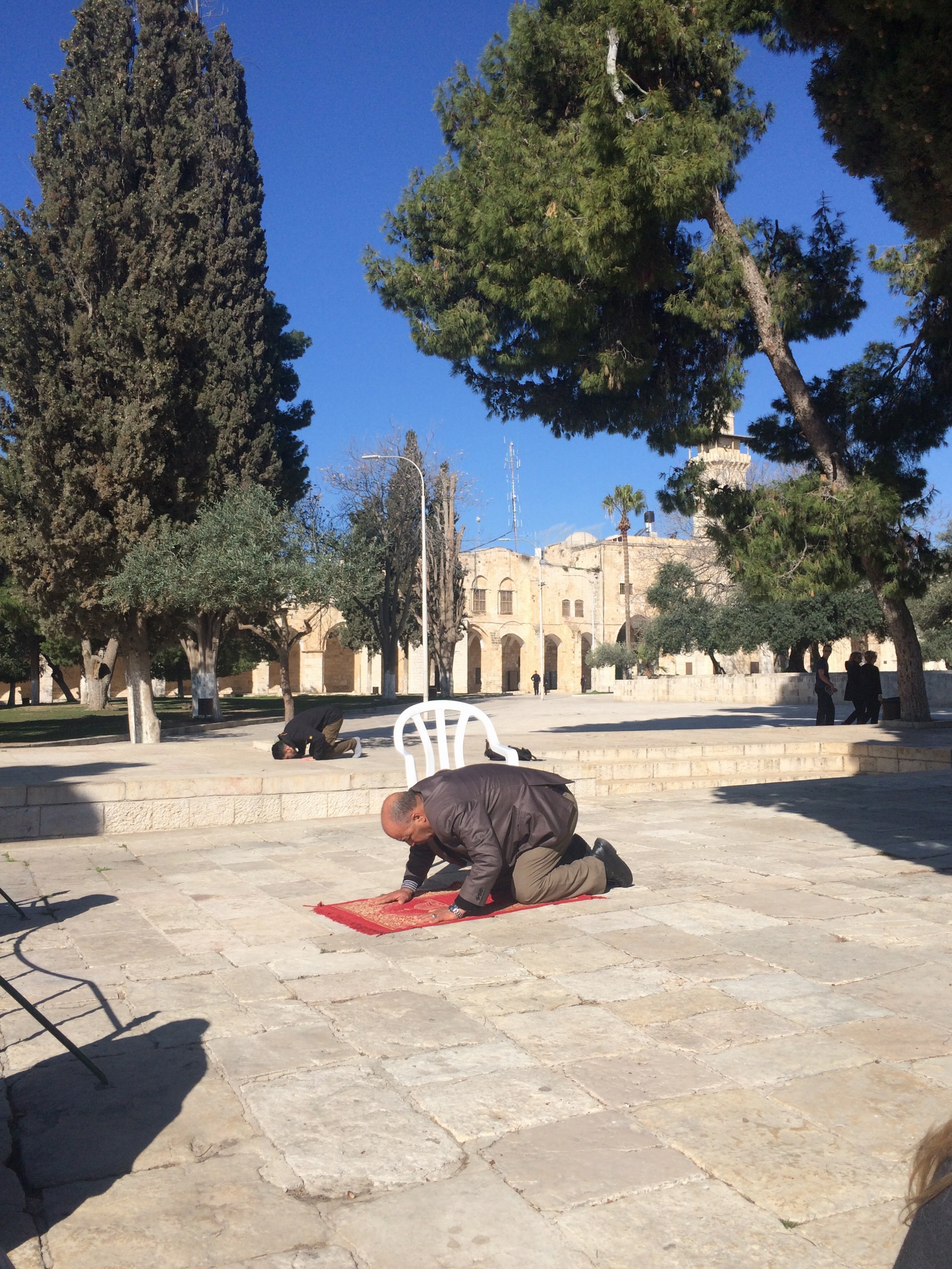 We leave the Temple Mount, walk a little through the Old City and arrive at the Temple Institute. This organization has prepared all of the items needed so that, when the time is right, they can once again build their Temple and begin their sacrifices again. I was reading in Leviticus before our trip so many of these items are fresh on my mind. This place is fascinating and their longing for their Messiah to come is evident.

The City of David~

So BEFORE Jerusalem was here, The City of David was here. David conquered the Jebusites here and we walk through tunnels David’s men would have climbed through to conquer the city. 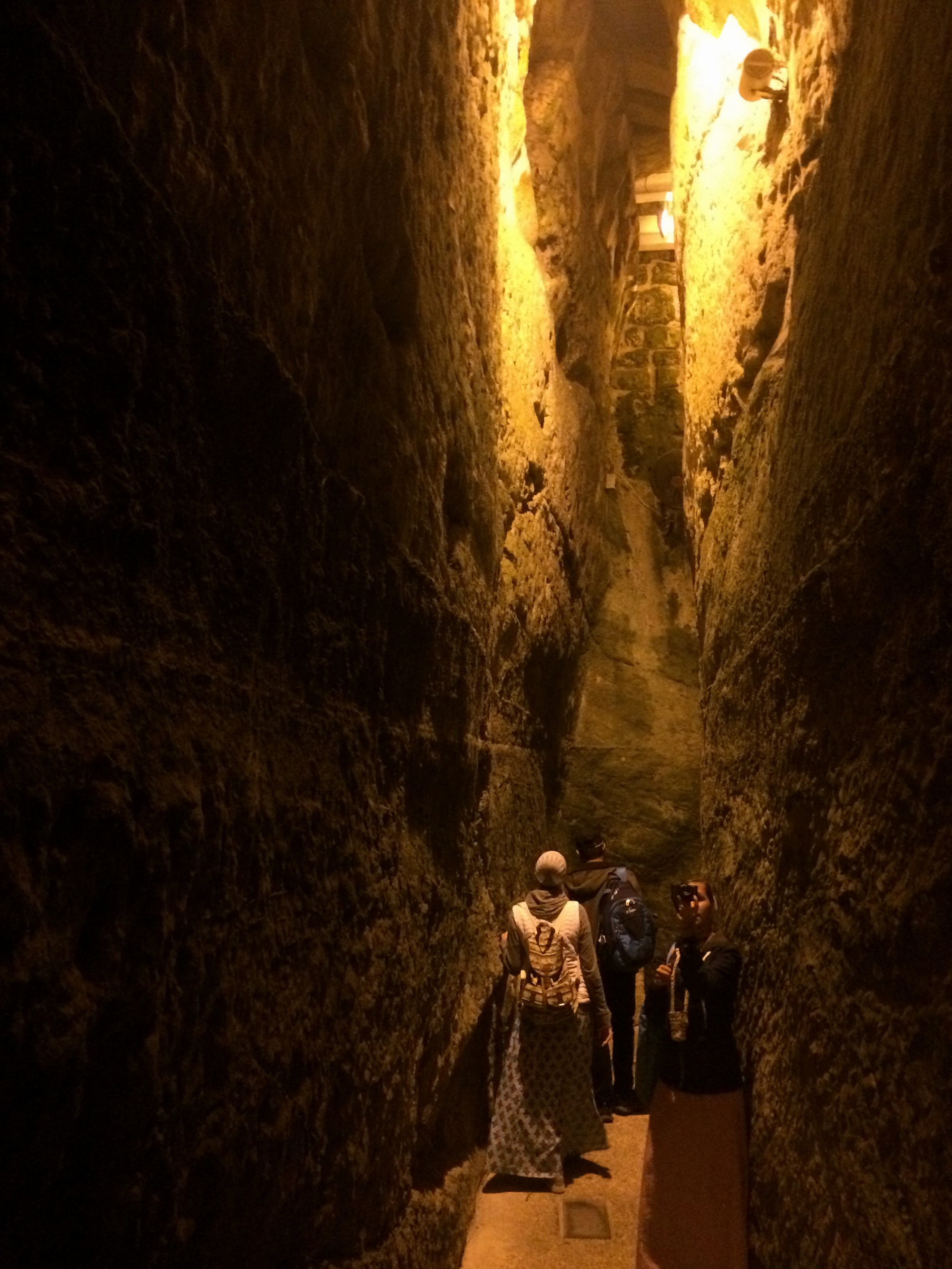 “On that day David had said, “Anyone who conquers the Jebusites will have to use the water shaft to reach those ‘lame and blind’ who are David’s enemies.[a]” That is why they say, “The ‘blind and lame’ will not enter the palace.”

We misunderstood and didn’t think we would be allowed to walk Hezekiah’s Tunnel so we weren’t prepared with the right shoes, etc…  I think Lloyd is a little sad about that. He told me, “You’ll never visit here this young again” 🙂

We see The Pool of Siloam built by King Herold and beside which Jesus healed the blind man. John 9 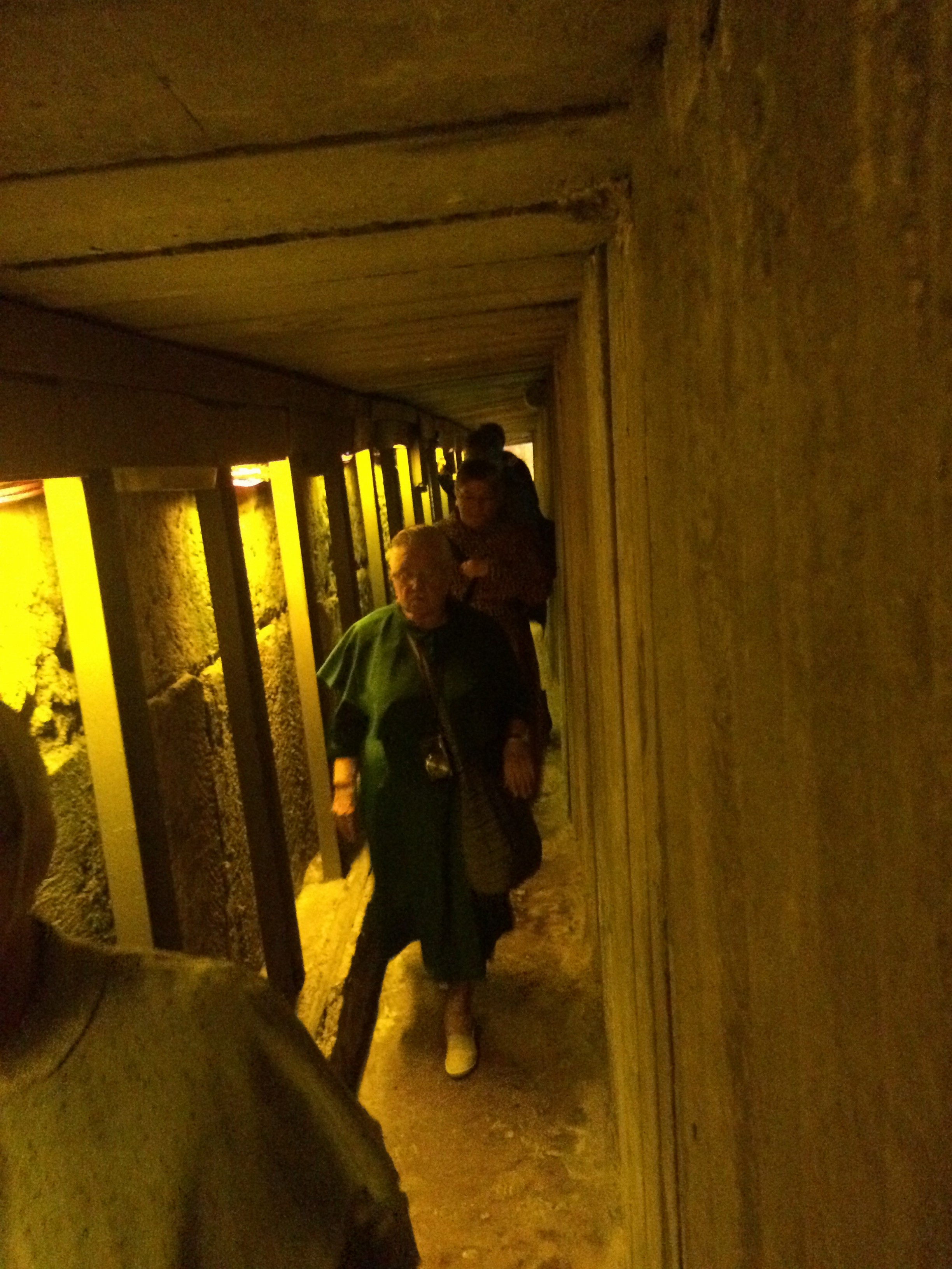 One more tunnel…I run my hand along a Temple Mount wall built  in King Herod’s day. The large stones were cut to lay together perfectly…you couldn’t fit a piece of paper between them.

There are little prayer rooms off of this tunnel for Jews who love to come down here, under the Old City, to pray. This is as close as they can get to the original Temple, which is lower yet, and to the Holy of Holies.

Speaking of that…they told us at the Temple Institute that the Jews believe they know exactly where the Ark of the Covenant is.

We walk through an aqueduct and inside of a huge cistern which was used, along with the springs, to supply the city with water. 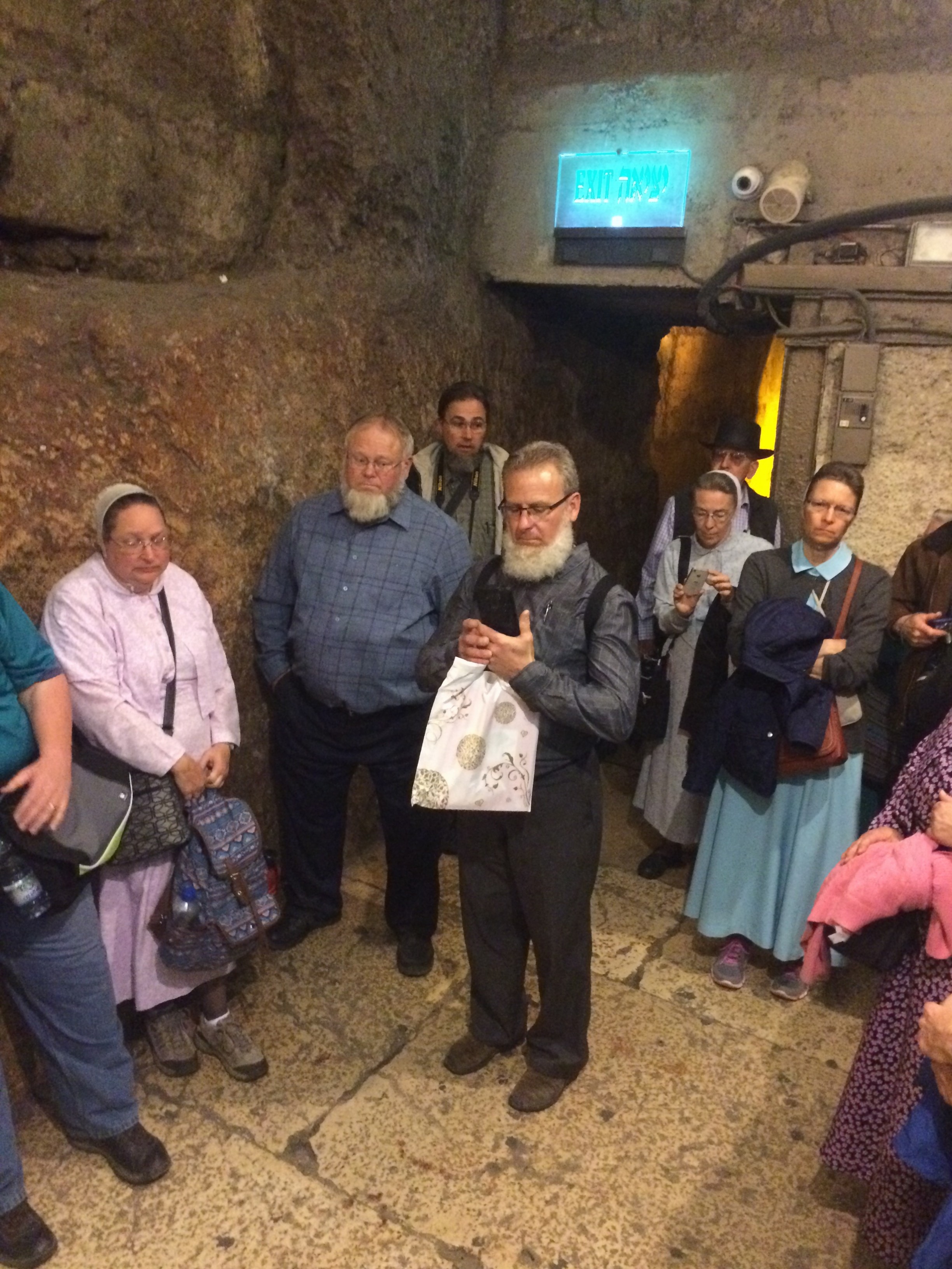 Above: We stand on paving stones from a road from days Jesus walked in this city.

After all that walking, the little Franciscan Chapel of Inquisition (commemorating the questioning of Jesus by Pilate I think) was a good place to rest a while.

I had never understood the whole destruction thing before. I always knew the City was completely destroyed in AD 70. But your don’t really *destroy* rock. You just rearrange it. So yes, it was destroyed. But in the process of doing so, huge piles of rubble ended up on top of some partially intact buildings or walls or whatever. As the excavate, they find these ruins, many of which are recognizable as walls or arches or buildings.

I like to think these dedicated and sincere people are praying personal prayers but I am told they are mostly reading prayers and they are wailing for their lost temple. 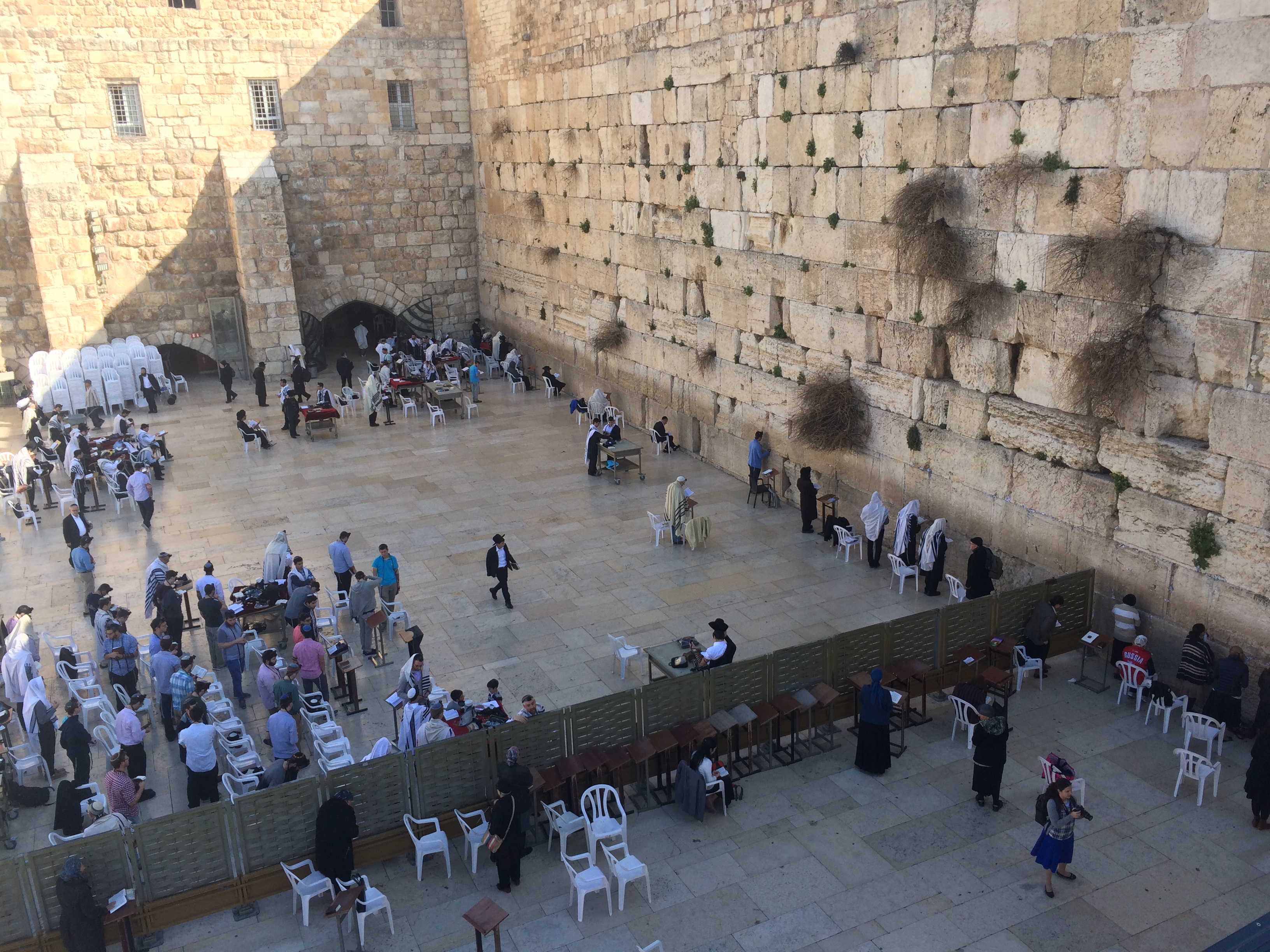 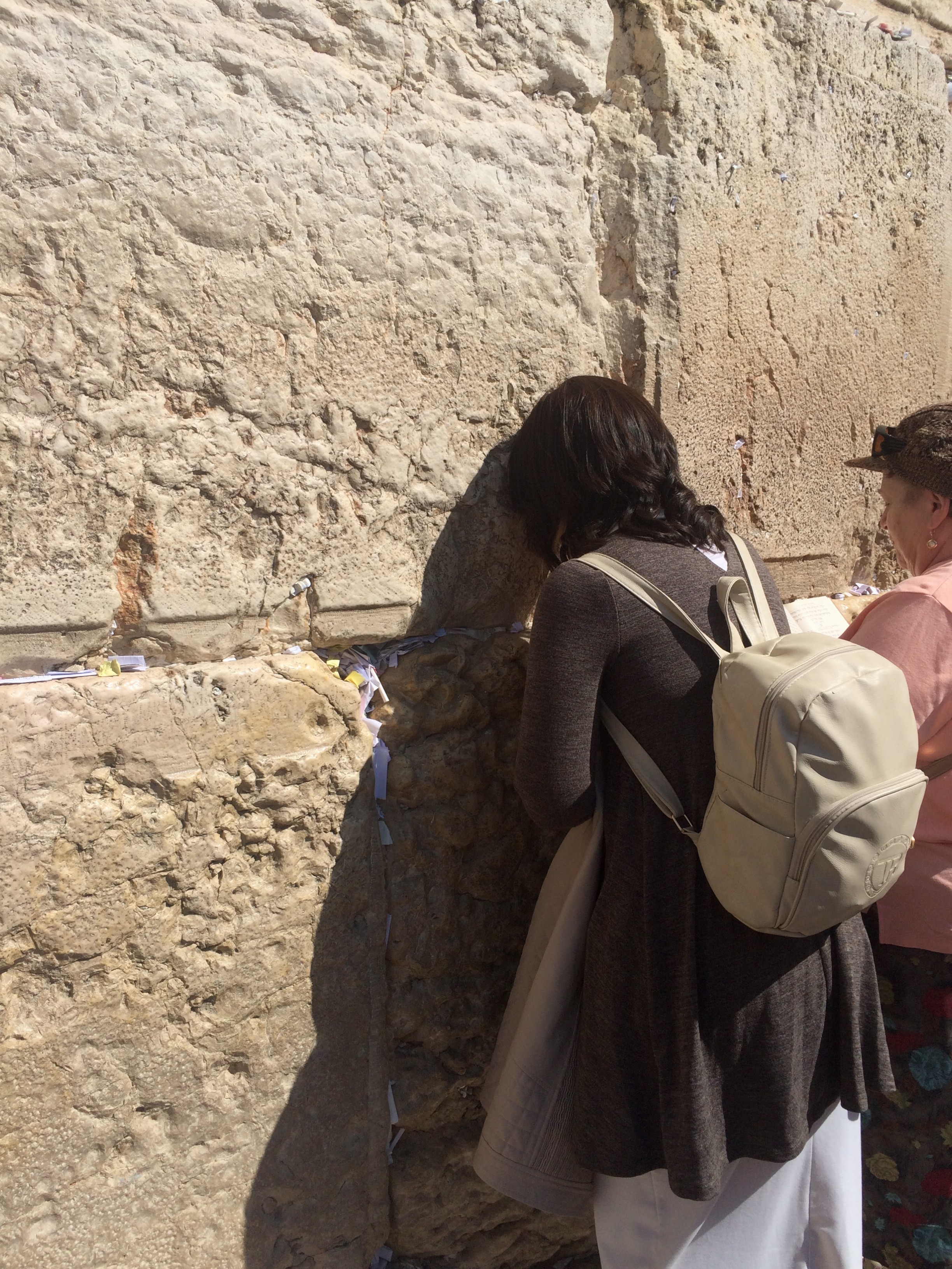 We walk a little of the Via Dolorosa. This is the Catholic version of The Way of the Cross, or the path Jesus would have walked on the day of His crucifiction.

The Church of the Holy Sepulchre ~ 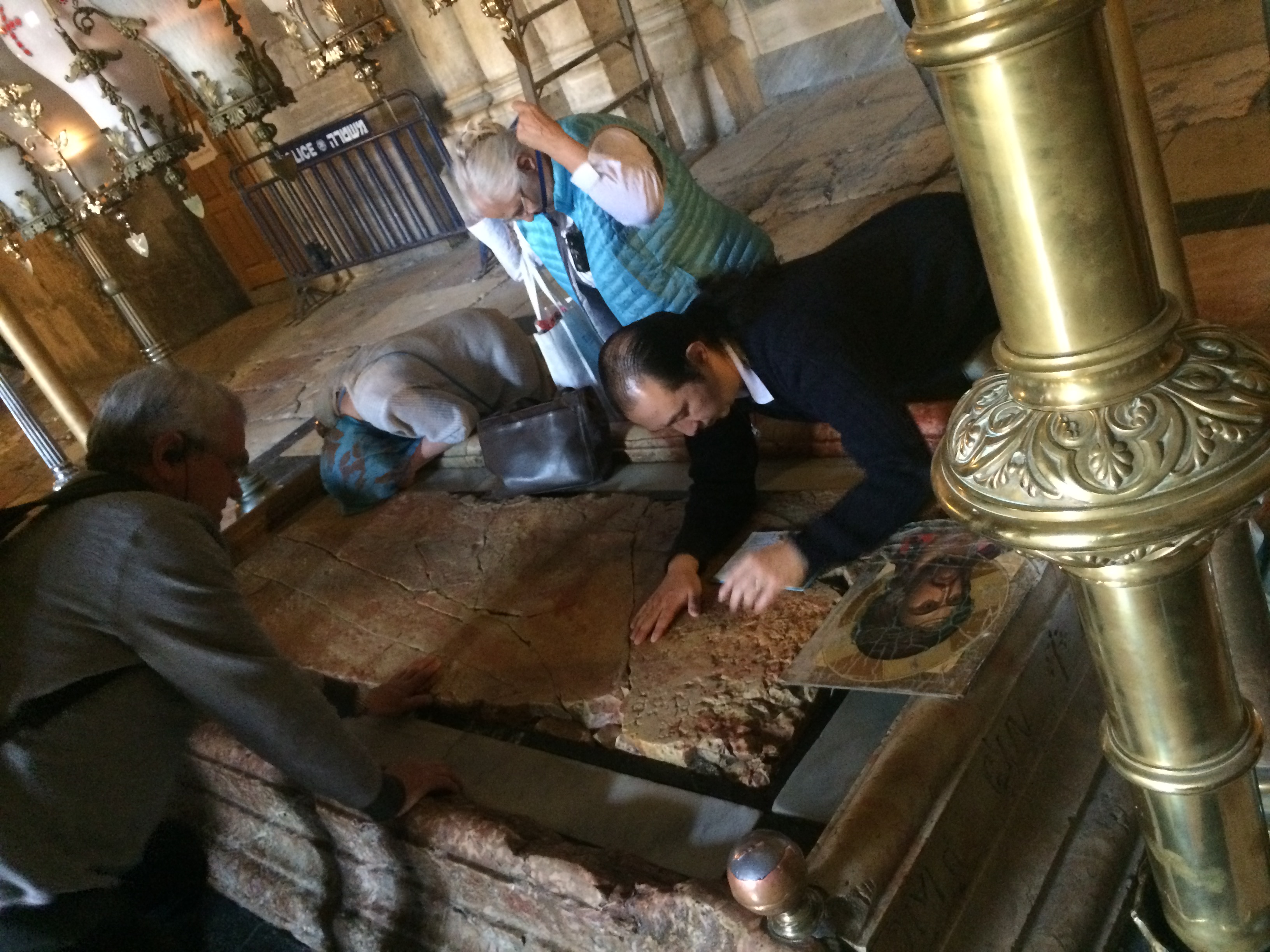 People praying over a stone in the Church of the Hold Sepulchre.

This is our last stop…a place where 4 churches wrestle over where, exactly, Jesus was buried. It’s a large, oppressive building. Dwayne and I walk down into one enormous, ornate “tomb” and decide we don’t even want to be in the building. We wait outside in the sunshine and the others soon join us. There are lines of people waiting to get into some of the “tombs” areas.

We have already walked quickly through small portions of the Old City to get to some of the places we visited today. Now Nibeal takes us to the Christian Section of the Old City and gives us 45 way-too-short minutes to shop. 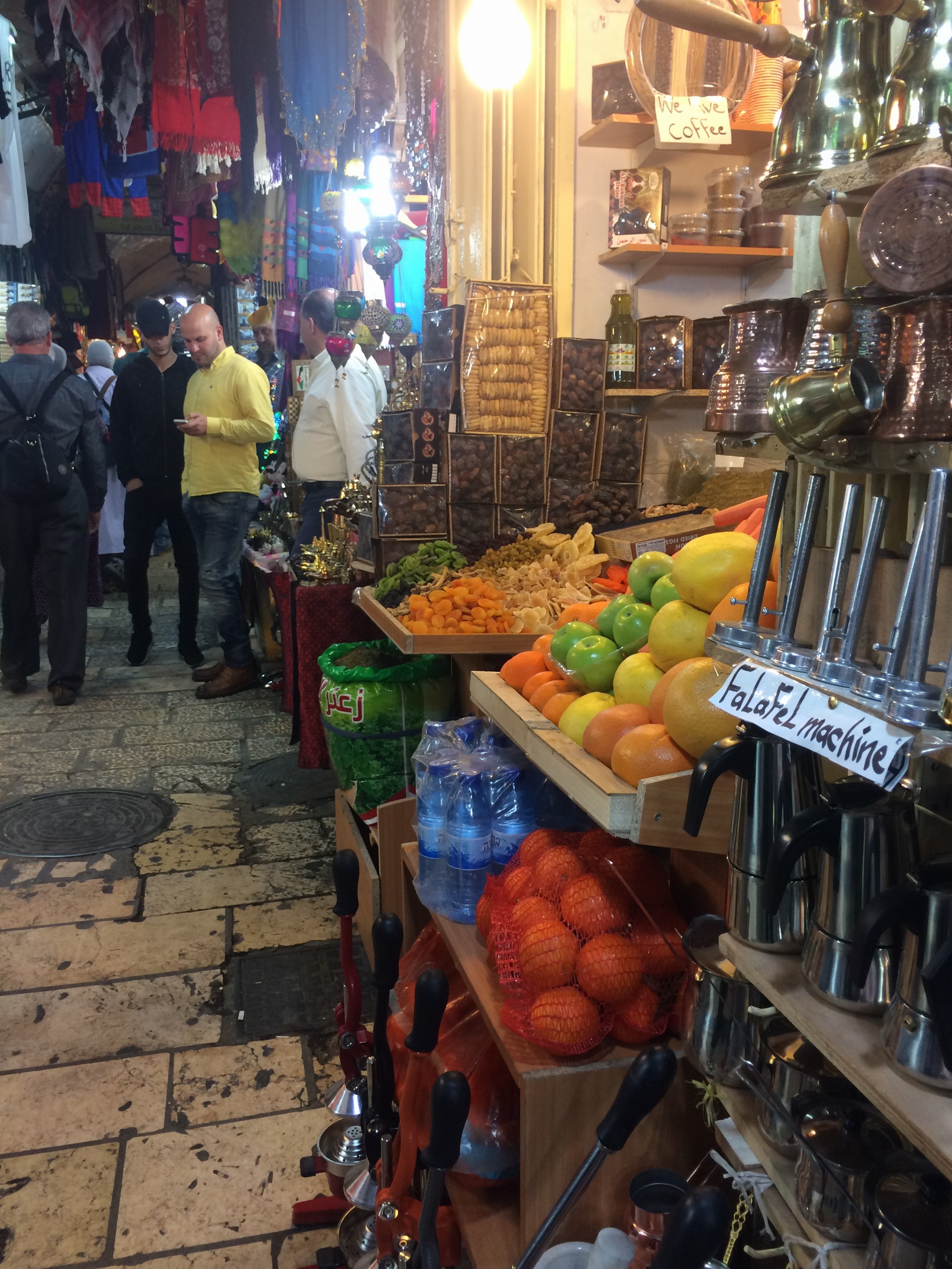 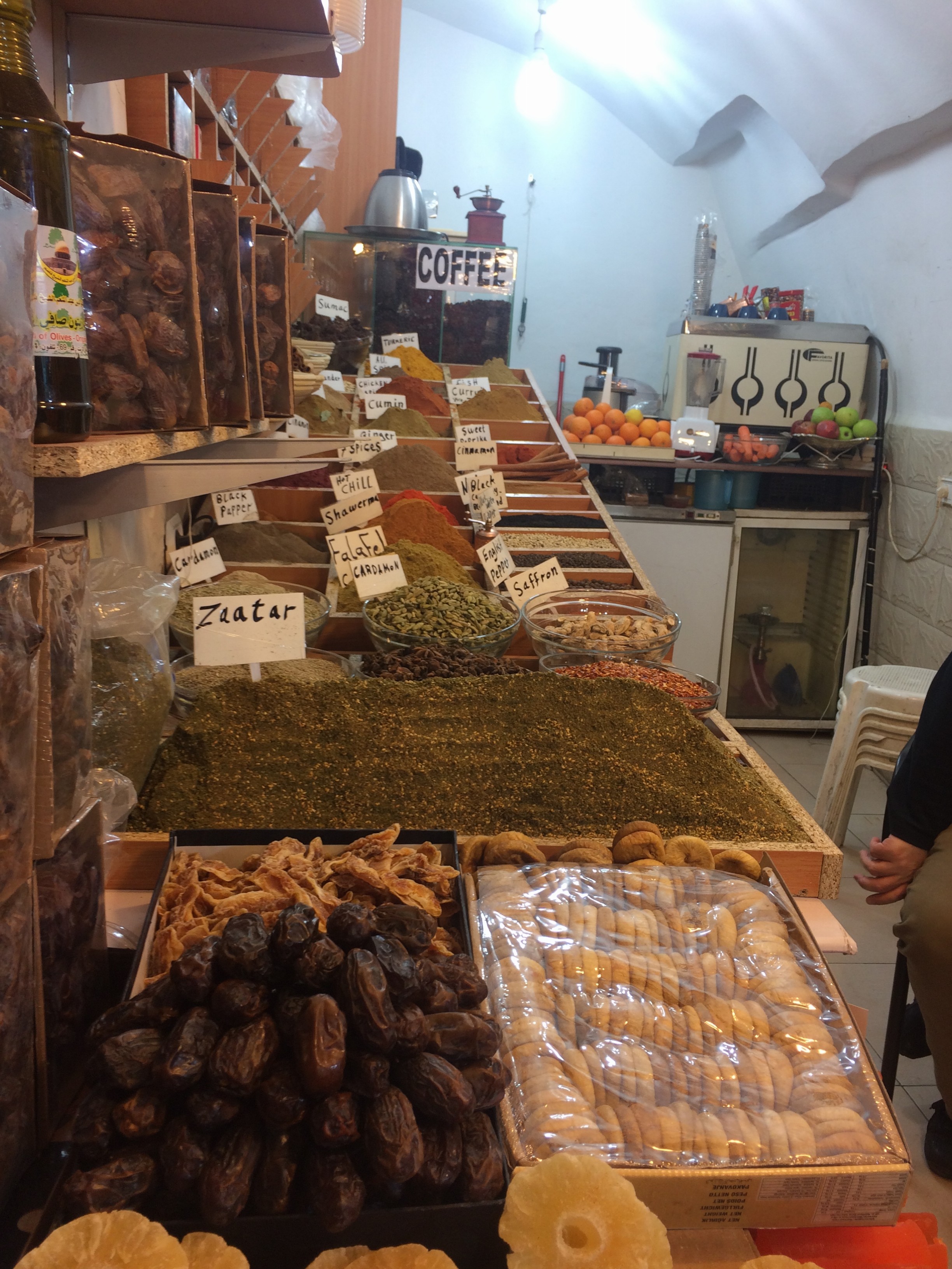 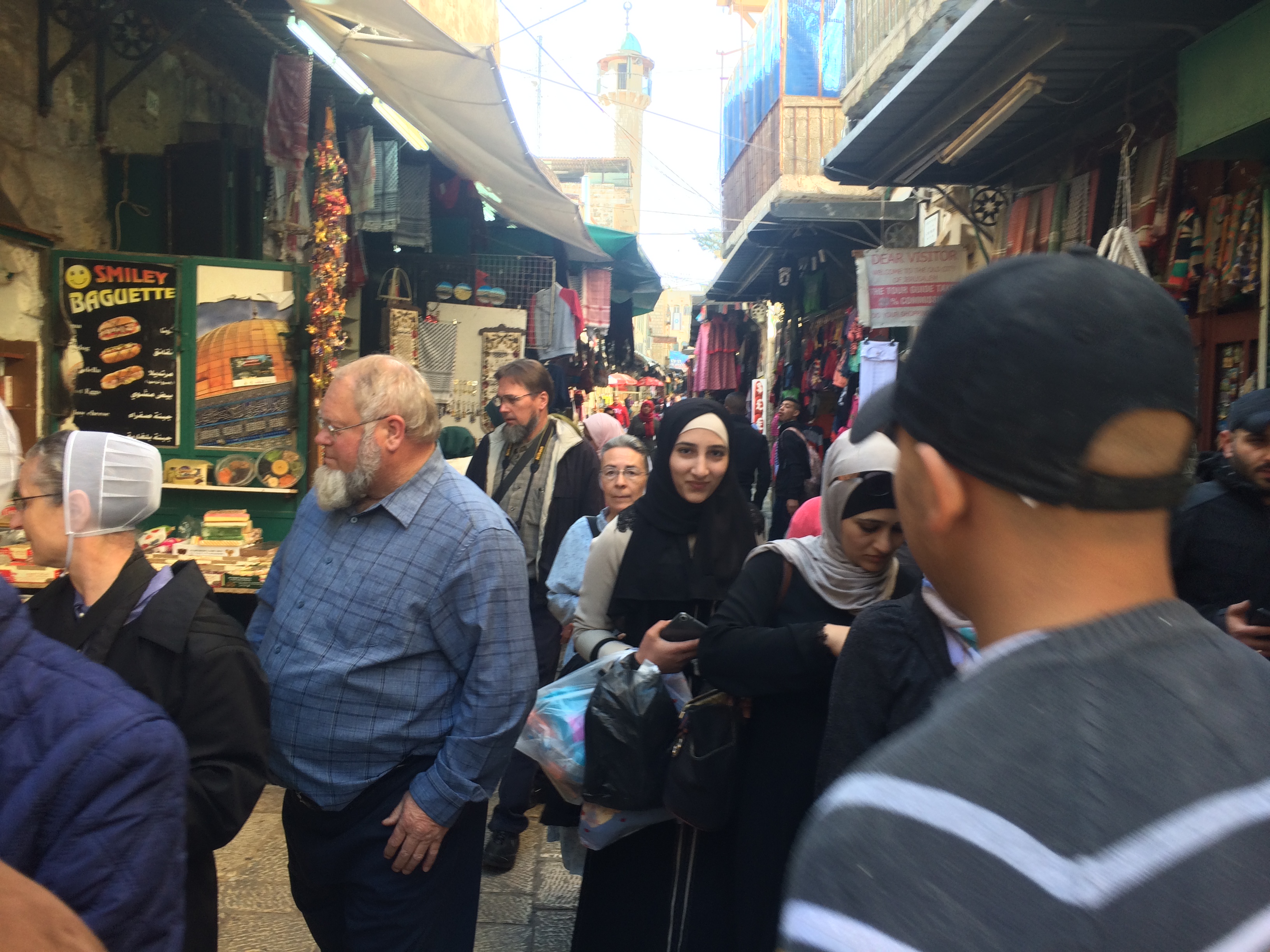 It’s SO much fun and Dwayne finds an olive wood nativity set for me! It’s not as beautiful as yesterdays but its $10,900 cheaper and I’m pleased with it. He buys a leather suitcase for $75 and literally 5 seconds later, as we pass the next booth, a man holds out an identical one and offers it to us for $35. There is no rhyme or reason to their pricing methods. The only thing I find that works is if I show them that I only have $5. Only then will they sell me their “$35” scarf for $5. I buy some fabric and the merchant hugs me and tells me he likes me very, very much.

I would so much love to have 2 or 3 hours to just walk in the Old City. I want to walk slow, look around, take it in, all 4 quarters. I want to see the houses and the grocery stores, the schools and more of the shops.  I feel like we hardly got a glimpse of it, other than our short shopping time and a couple quick walks going from one place to another.

There is just so very much to see in Israel! Wyatt and Gail have done a super job of organizing our trip and honestly, I feel like the pace has been perfect. Today was the first time I’ve felt like I needed more time. I’m also thankful for our guide. Today there were many other tourist groups nearby and I could overhear some guides. A couple of them sounded like they were reciting memorized information and I even heard one declining to answer question. Nibeal has been a really good guide!

I don’t know exactly how I feel about today. I love the Old City and would like to know it better. I liked seeing all the things we saw and wouldn’t wanted to have missed any of them.

But somehow, it feels like so much Herodian History and Hebrew here in Jerusalem….and so little Jesus.