Nibeal gives an overview of the orthodox Jews as we drive through their section of town on our way to the Mount of Olives. These people live in their own community and neither the men nor the women hold jobs.  Instead the men spend their lives studying the Torah and I suppose the women care for the home and children.  They are supported by the state and are also exempt from military service, as well as some taxes and permits. I ask Nibeal how the rest of the Israeli citizens feel about that and he responds by explaining that the orthodox Jews run the Department of Interior. 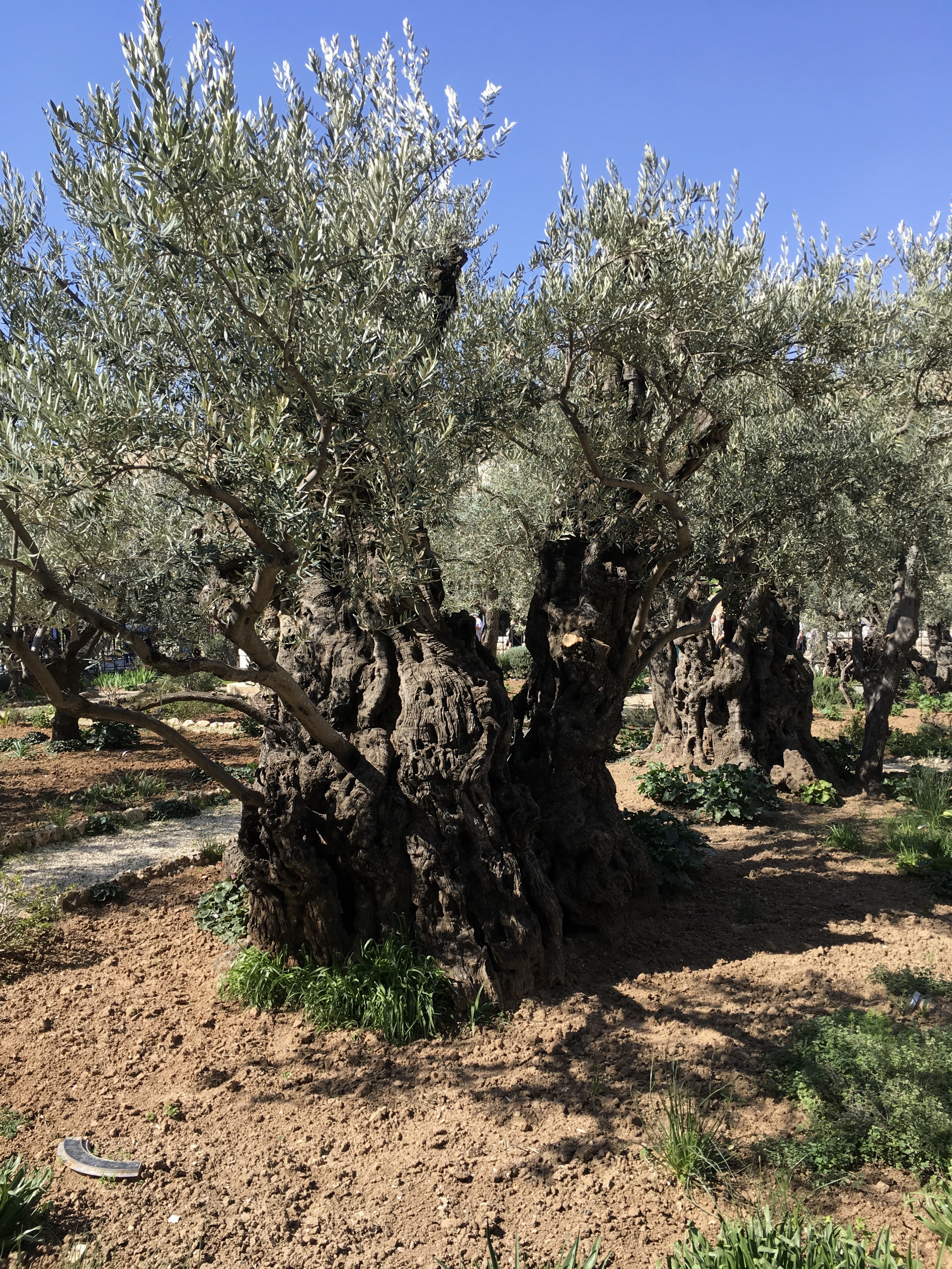 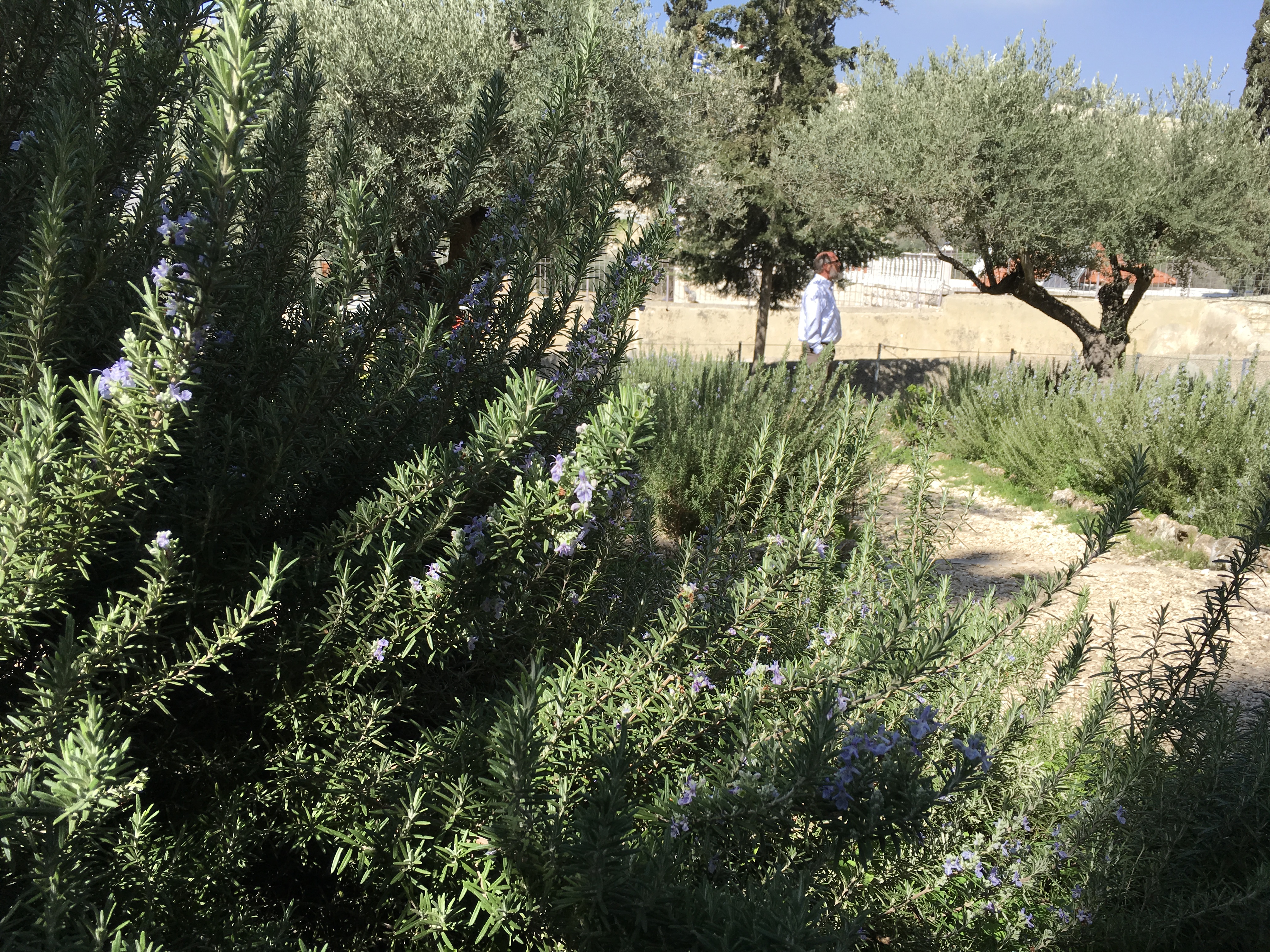 Where ever we go, Dwayne always has to check out the health of the trees 🙂 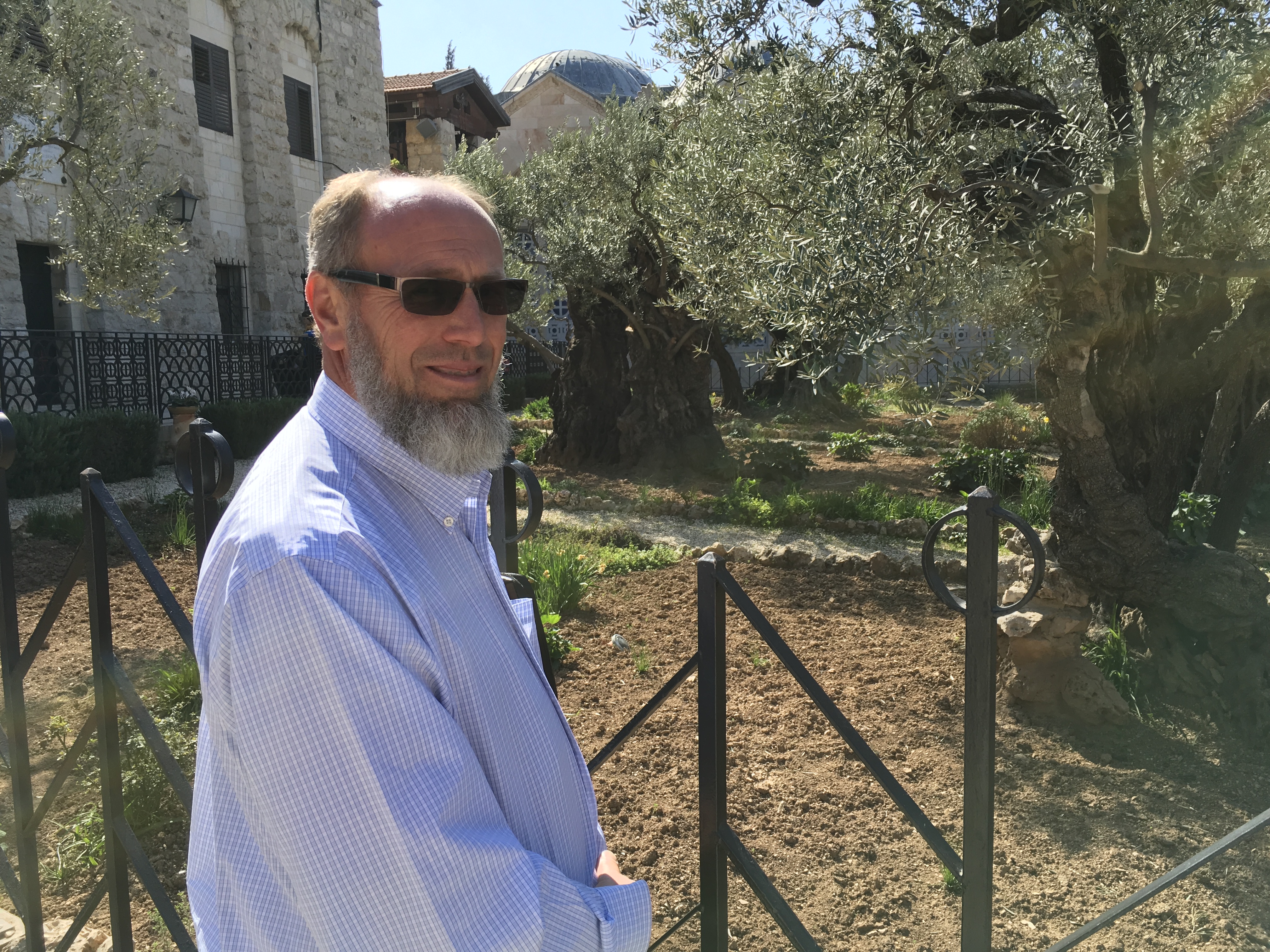 Mt of Olives ~ From up here we have a wonderful view of Jerusalem and the Temple Mount.  David came through here when he was fleeing from Absolom and Solomon built groves on this mountain for his idol- worshiping wives. From this place Jesus ascended up to heaven and here is where His feet will one day stand again.  “And his feet shall stand in that day upon the mount of Olives, which is before Jerusalem on the east, and the mount of Olives shall cleave in the midst othereof toward the east and toward the west” Zechariah 14:4

A church is built on the mountain top and has a tiny hole in the floor, revealing a bit of rock that Jesus supposedly stood on. Dwayne and I are both disappointed with the area. Dwayne was supposed to speak here so he has studied it and has been anxious to see it. It’s just all buildings and pavement…so much so, that it’s hard to get perspective. I can’t even tell I am *on* a mountain until we get down to the bottom later and I can look up.

I find myself silently repeating a little rhyme I learned along time ago. “Feeling, Faith, and Fact were standing on a wall. Feeling took a tumble and Faith began to fall. Faith was so entwined with Feeling that when he fell, Faith fell too. But Fact remained, and pulled Faith up, and that brought Feeling too.”

In visiting some of these places, there are no feelings at all and I just have to be satisfied with the facts that I know that I know. Jesus suffered. Jesus died. Jesus rose. Jesus Lives! 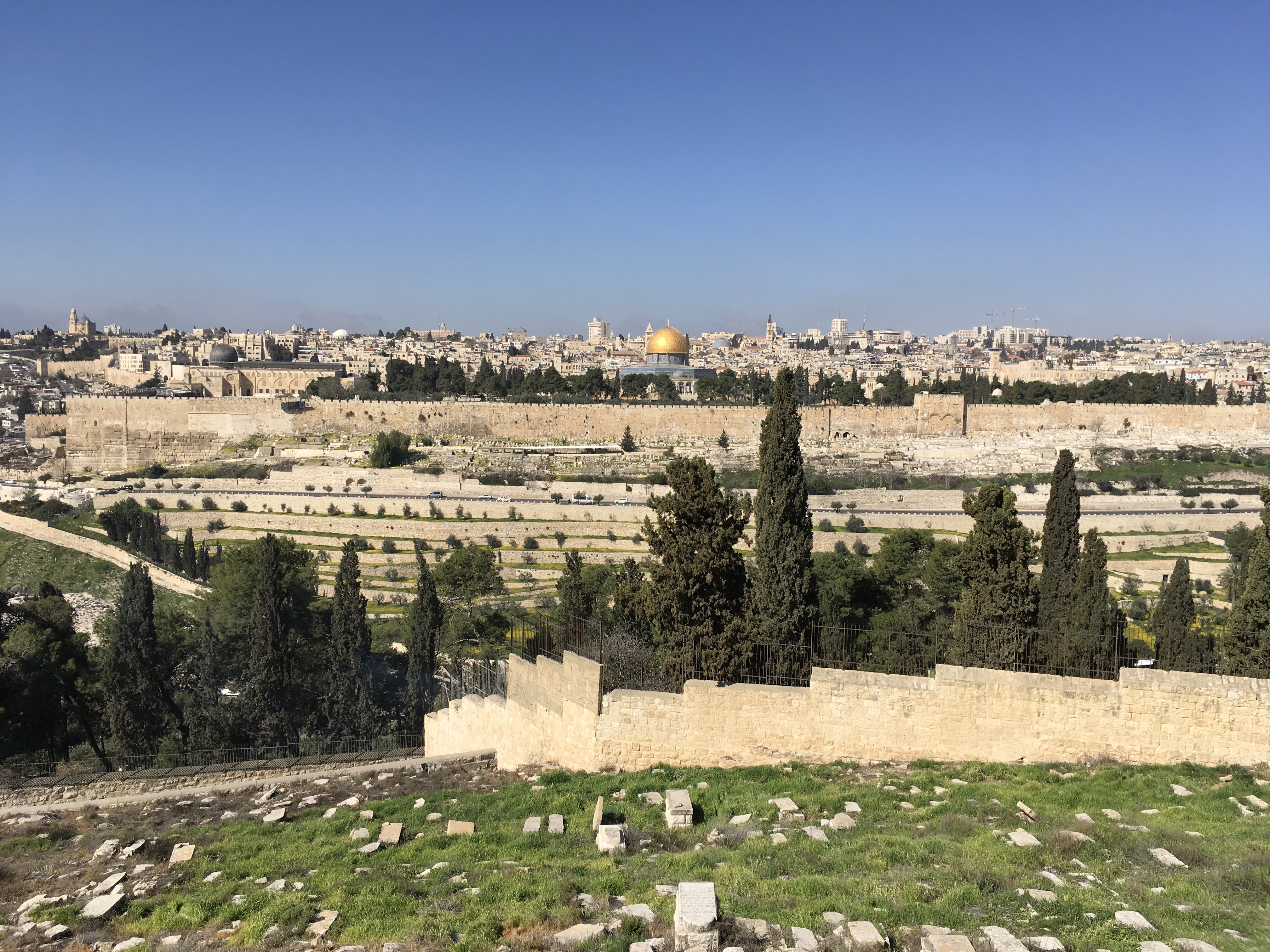 We see the Dome of the Rock in the distance. I always think the Dome is beautiful in pictures but standing here, it seems more like an eyesore. It doesn’t belong here. I tell Dwayne that and he says, “Well, we don’t want temple worship there either.”

And it’s true. What we want is every eye to see Jesus and every knee to bow *now* so that these dear Jewish people can be spared the tragedies that are coming some day. 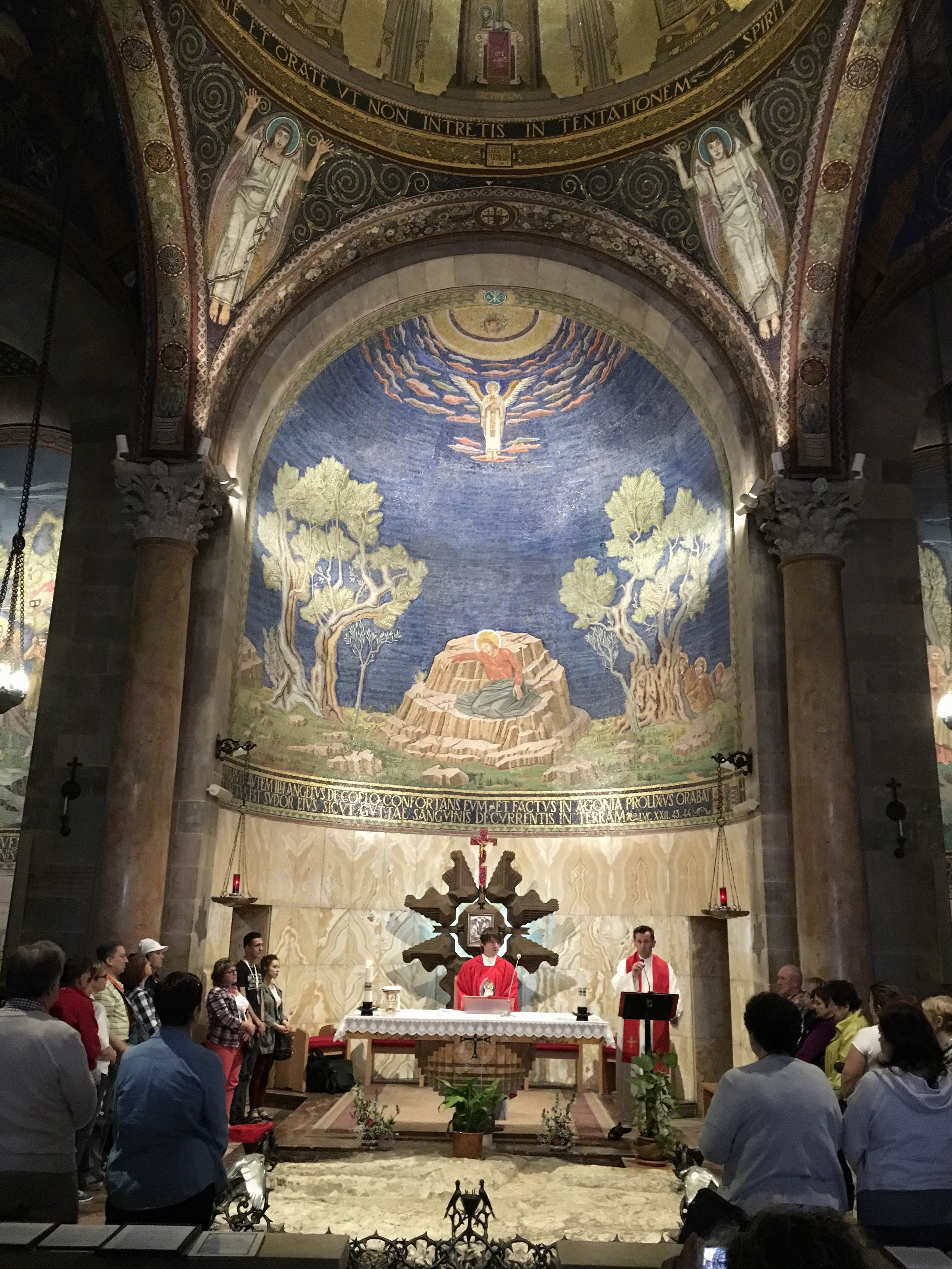 We enter the church which holds the rock over which Jesus supposedly agonized. A group is worshiping there. The whitish area in the foreground of this picture is the rock.

I am struck with how much worship happens in Israel in public places. So different than in America. 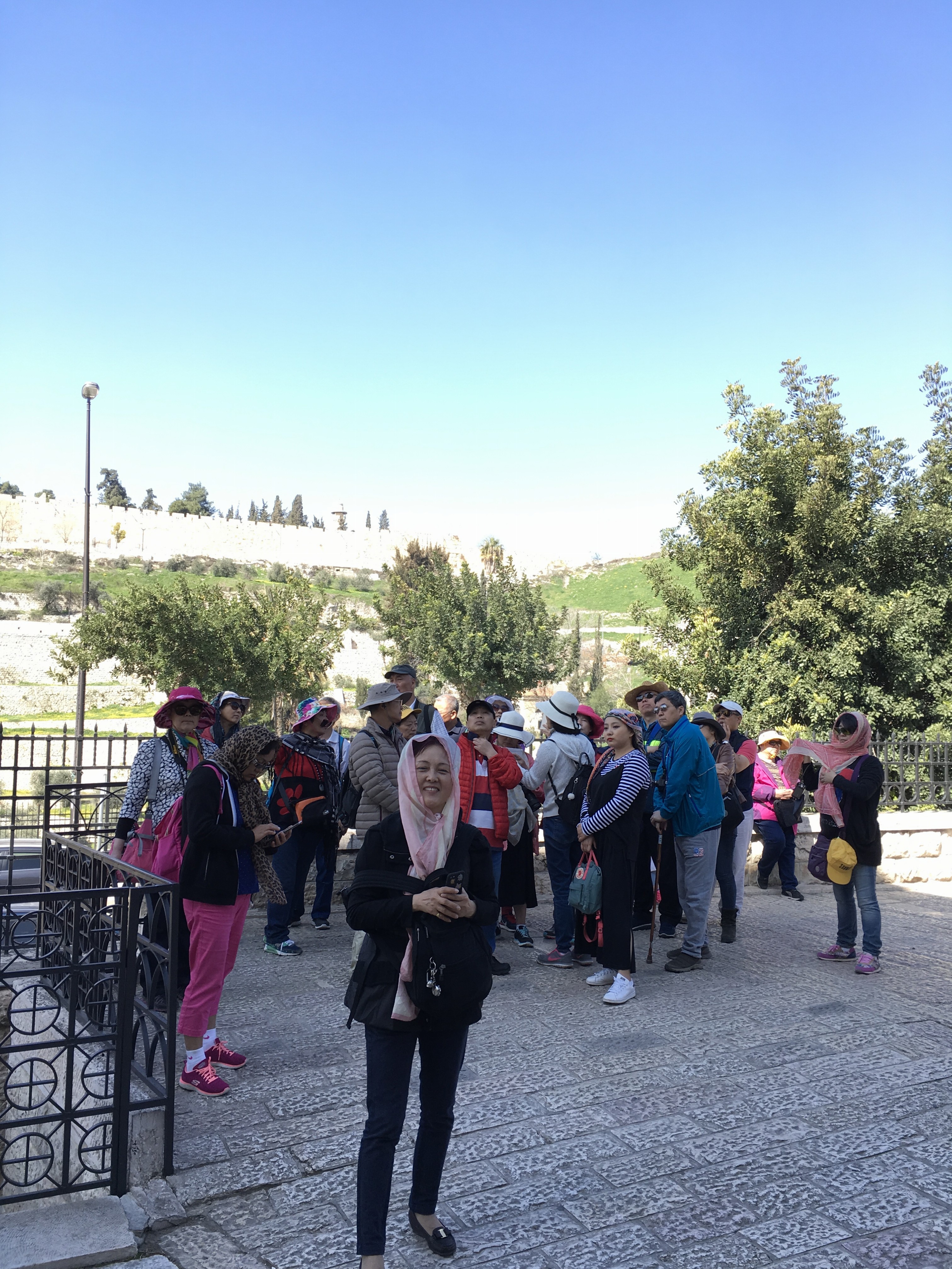 Chinese believers. We love stopping to talk to people of all different ethnic groups. We see large group from India today…so exciting to see them all.

We visit an upper room which would have been like the the one the Lord and his disciples used for the last supper. 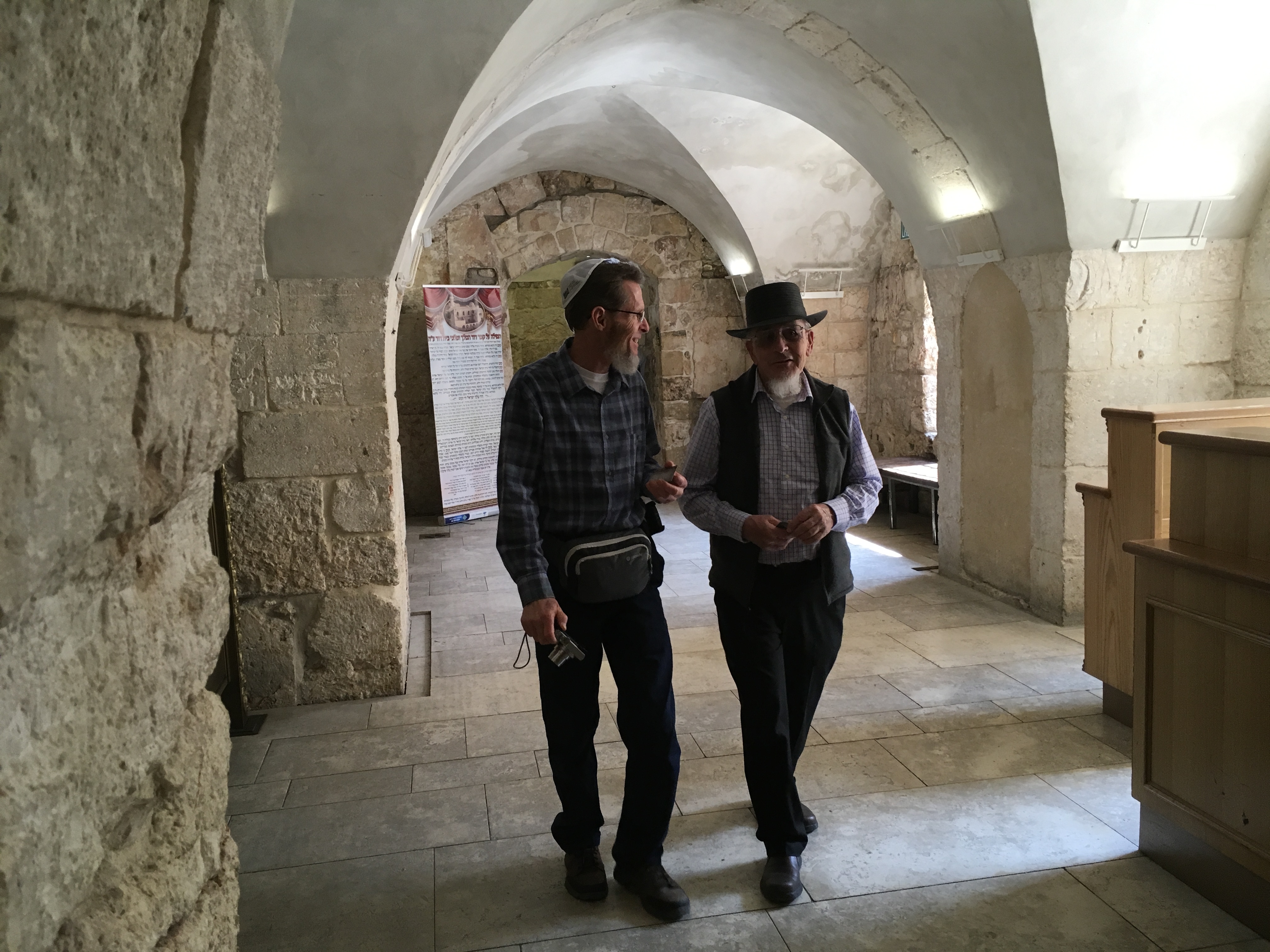 At King David’s tomb we separate since women must enter one way and men another. The men all must wear yarmulkes. Dwayne asks if he can keep his and the keeper of the tourists says sure. D thinks it might help with his sunburn problem. 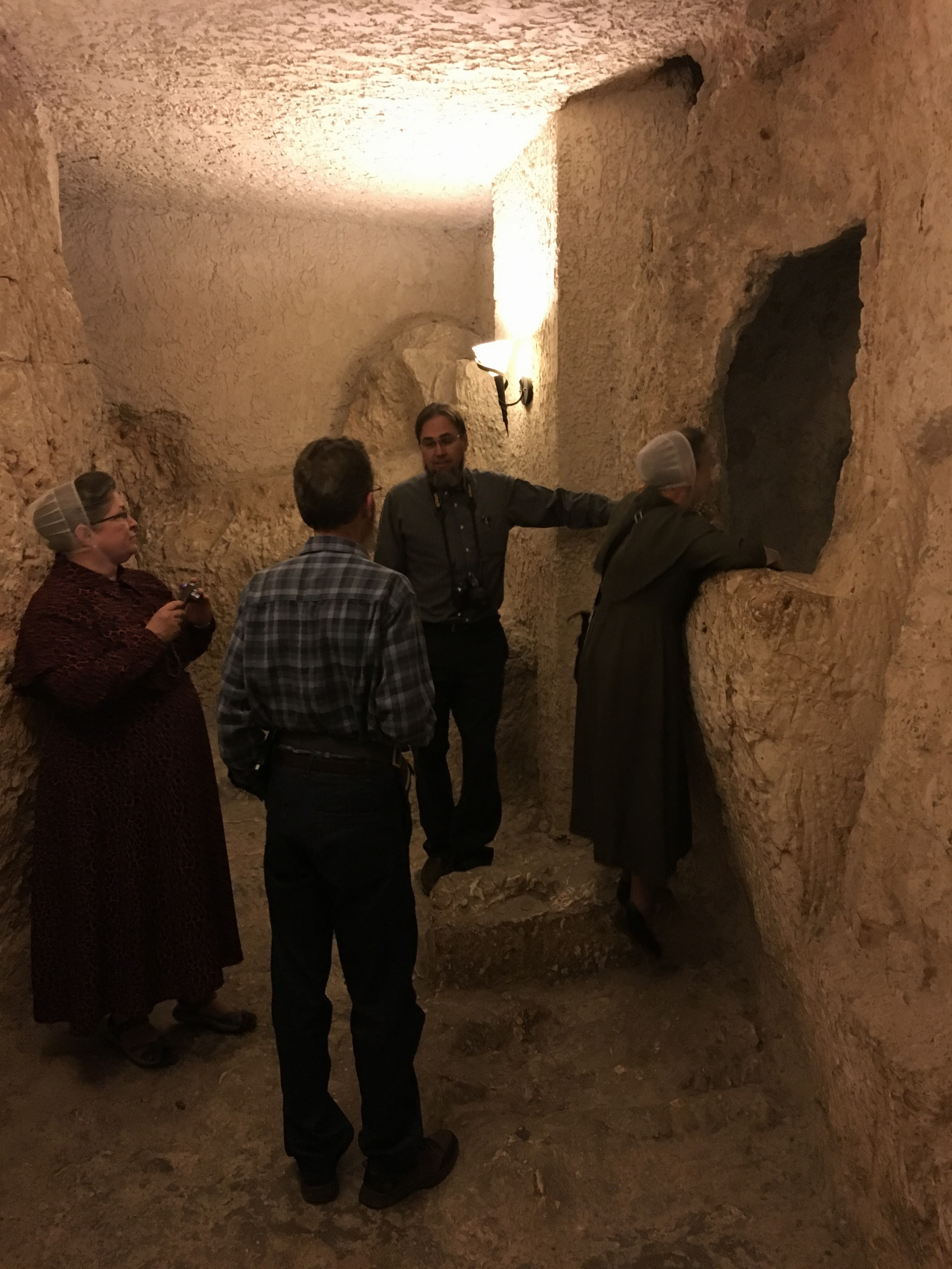 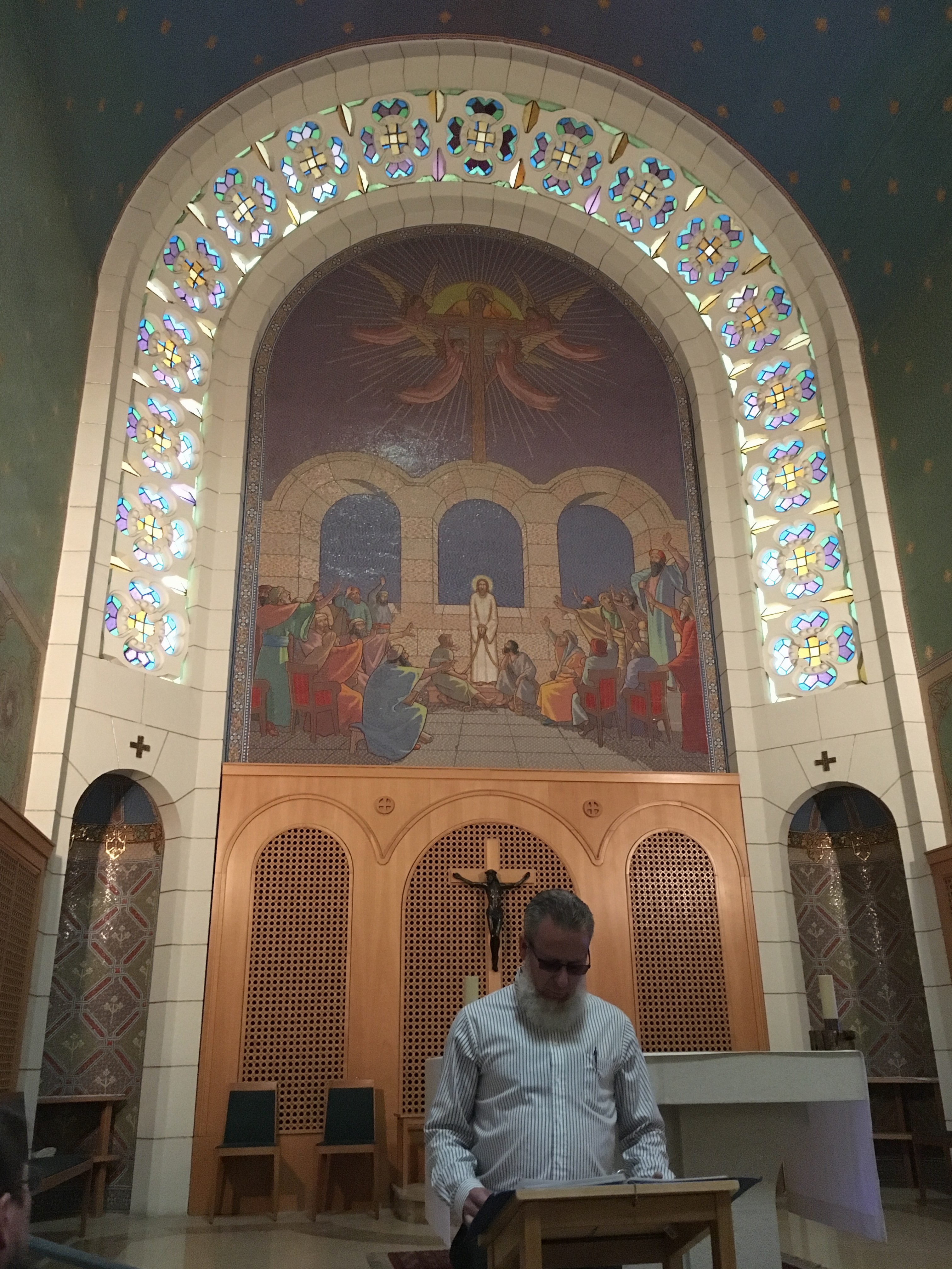 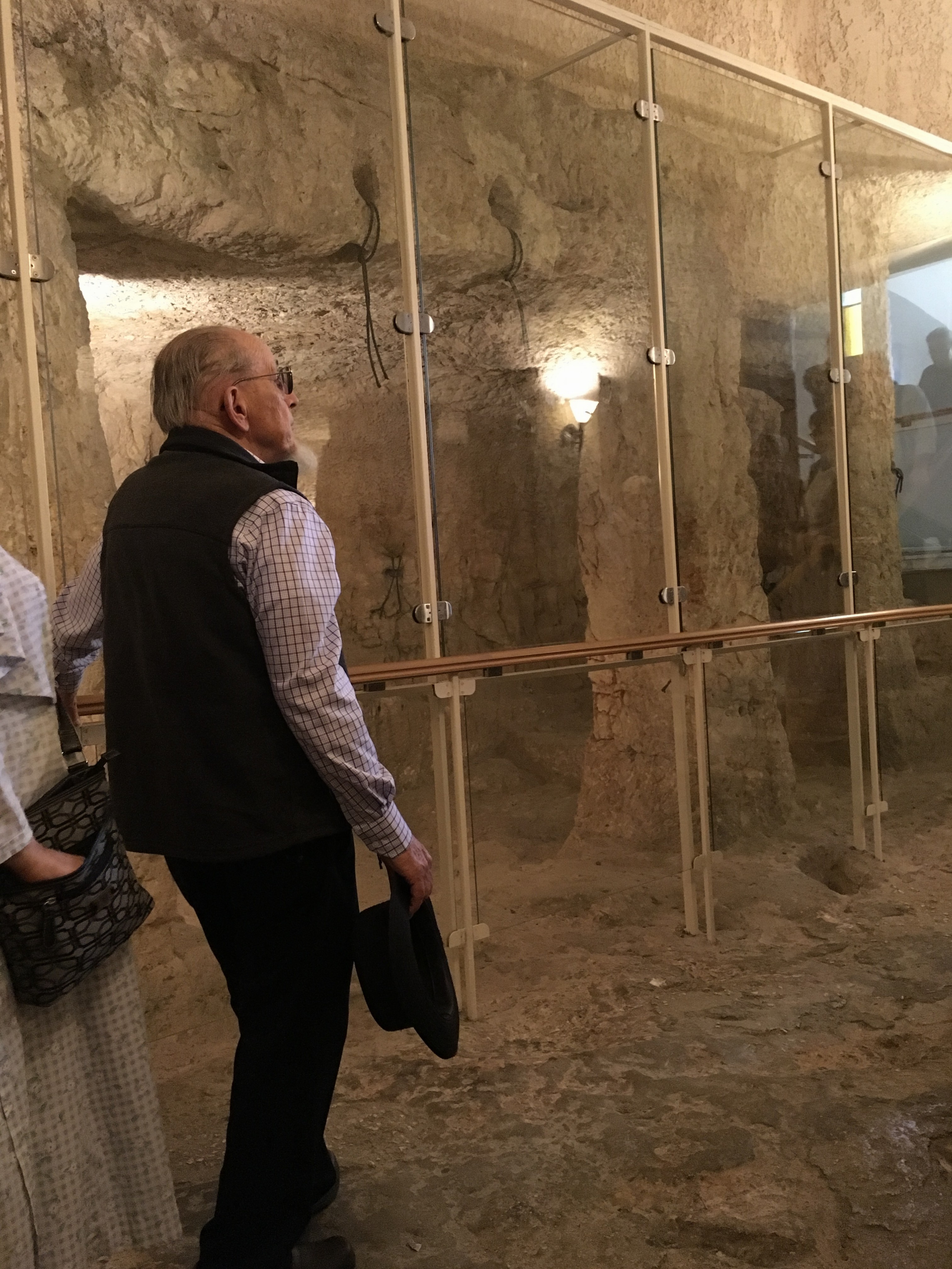 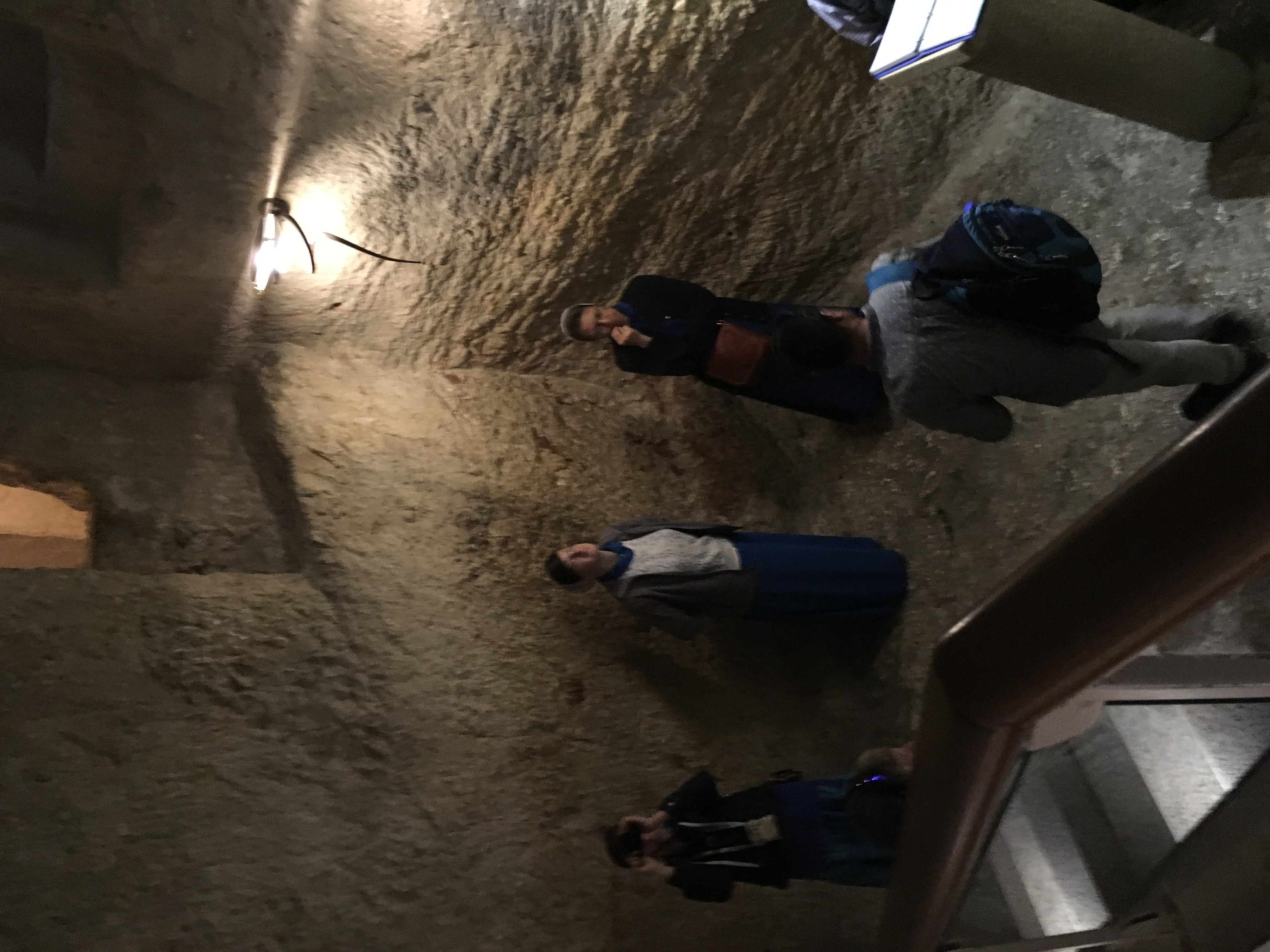 Caiaphas House…the place to which Jesus was brought for trial after being arrested in the Garden. Under this house we see the prison Jesus may have been put down into overnight. This seems very authentic and it was certainly a deep pit of some kind. Note the place where prisoners hands might have been tied up.

Kendall is speaking in the chapel or church (I forget) that has been erected where Caiaphas house would have stood, over the jail. 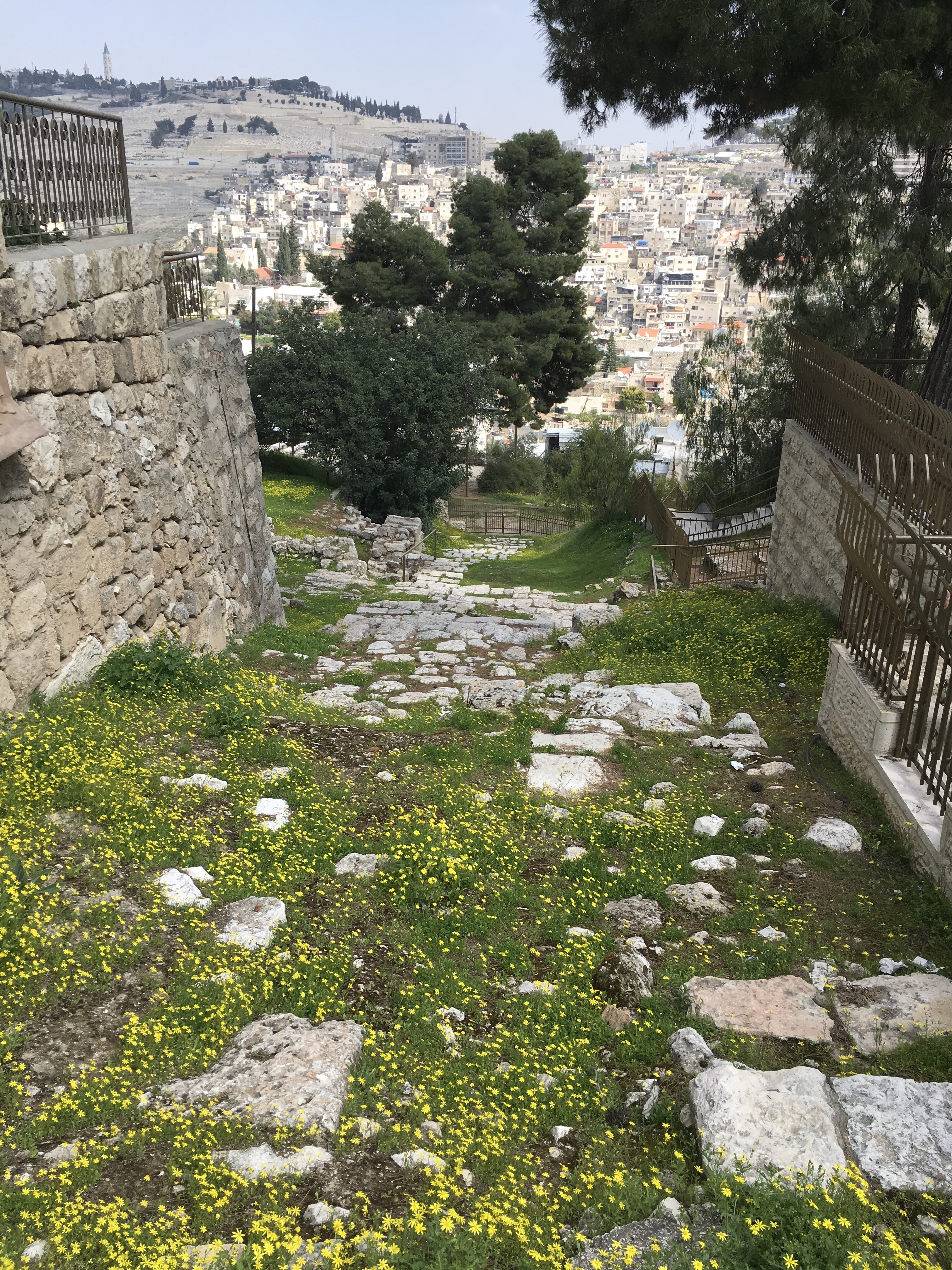 These are the steps Jesus would have climbed while being escorted by the temple guard from the Kidron Valley to Caiaphas’ house. They are fairly certain this was the place of Jesus trial.

Back on the bus, we head to the West Bank again and into Bethleham. A delicious lunch of Falafel again…a favorite of mine…at an Arab restaurant called Ruth’s restaurant. The owner who takes our orders tell us her name is Ruth and her husband is Boaz. I love eating at these Arab places. In fact, I just like being in the West Bank. I can’t explain why…maybe it reminds me a tiny bit of China.

I thought about Zeke often today. I am really, reallly missing my usual morning cup of tasty, home brewed coffee. I remember how homesick Zeke was about 3 weeks after coming home and today I can imagine a little of his yearning for familiar drinks and food. 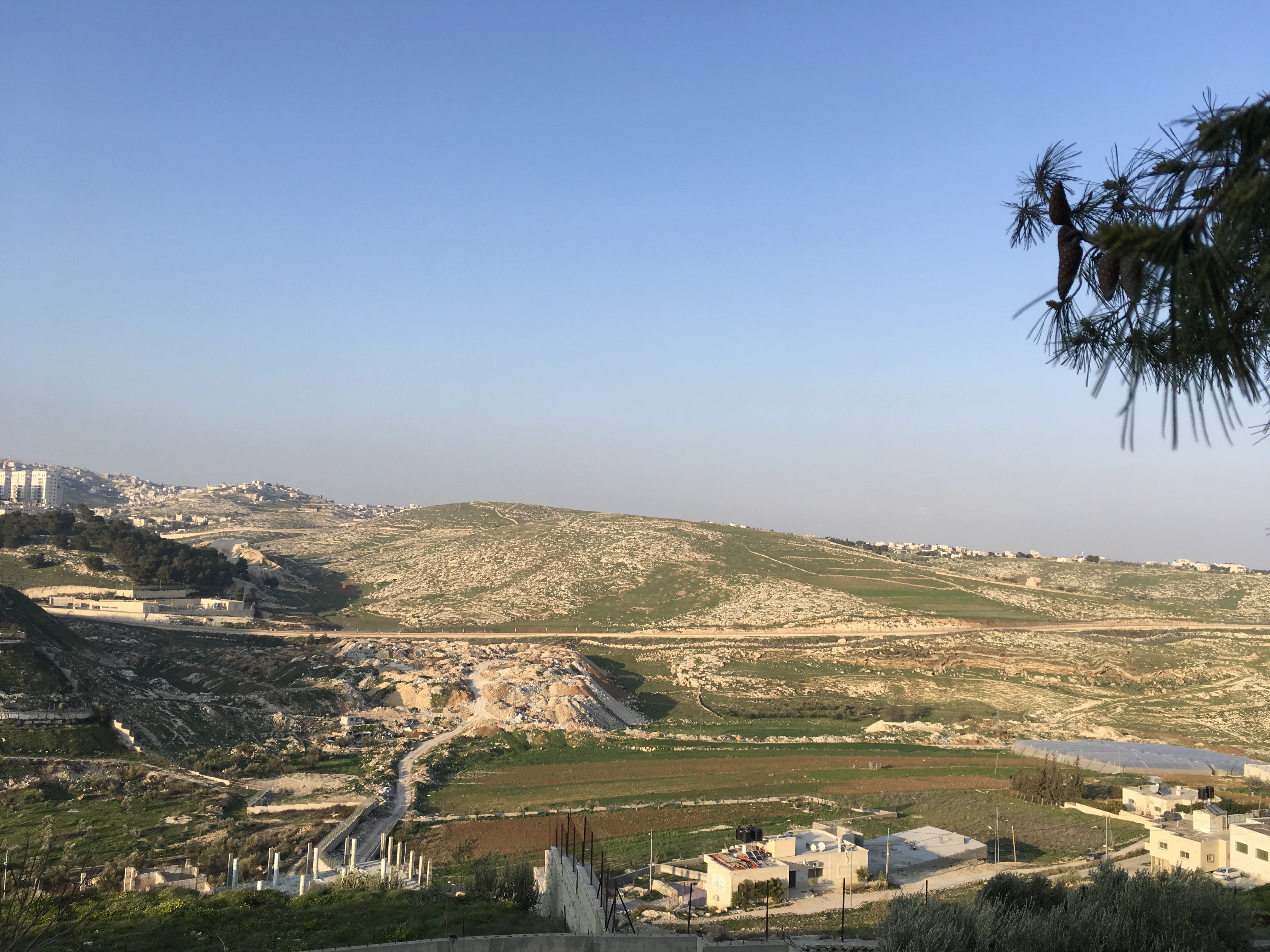 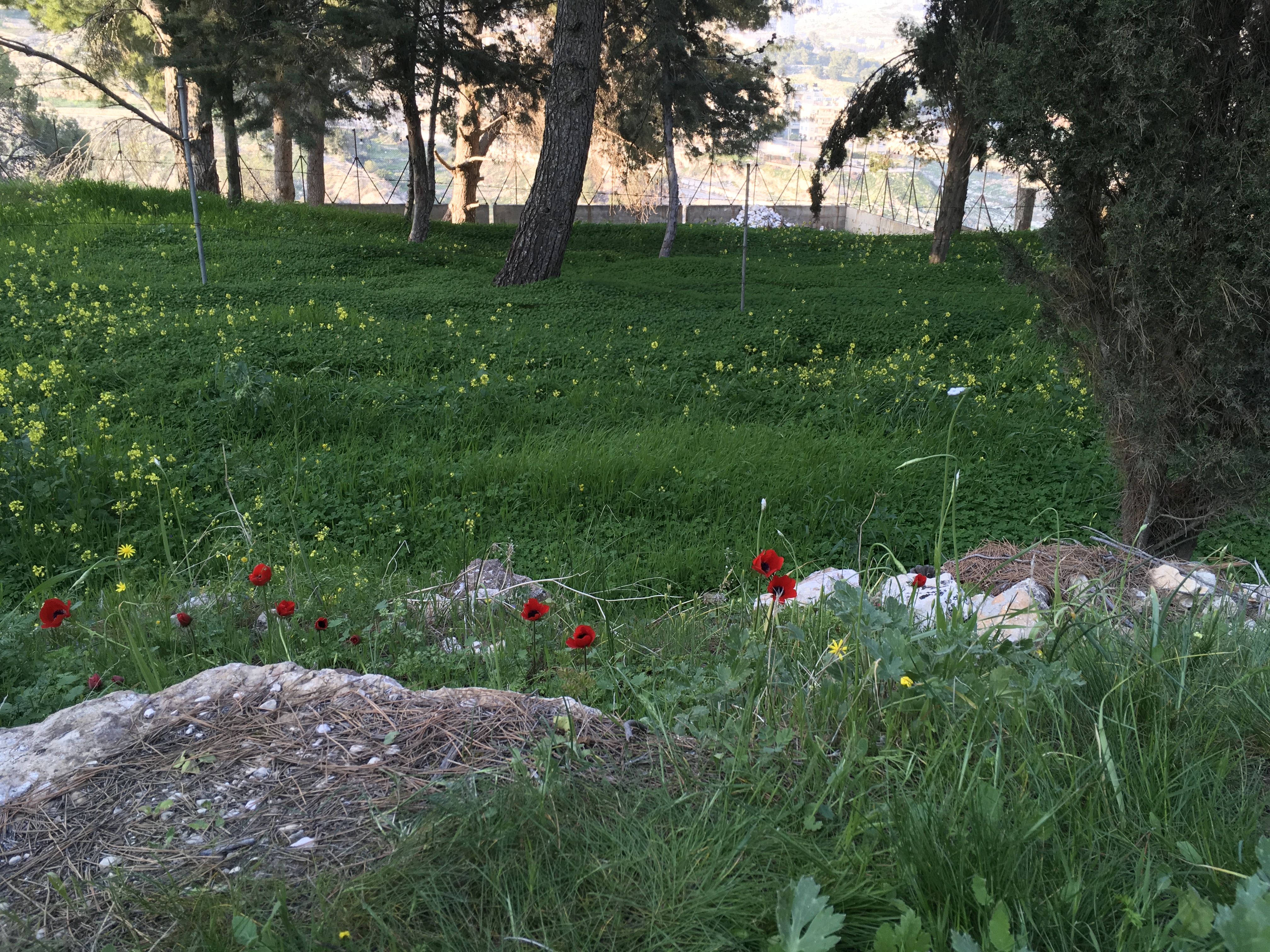 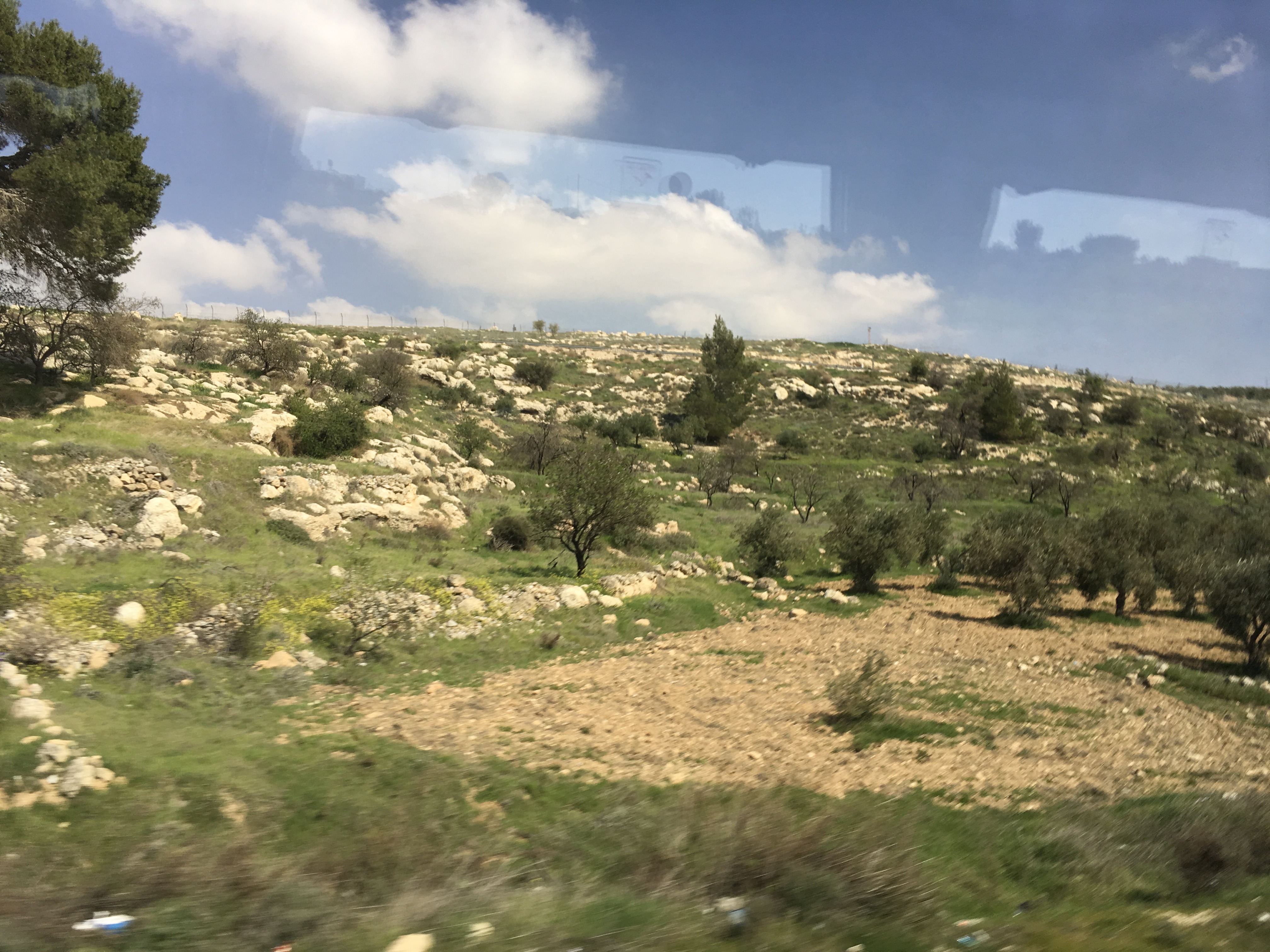 We are in the Judean Hills, where shepherds would have kept their flocks.

We drive by fertile fields thought to be the Old Testament feilds of Boaz and Ruth. There are no rocks in them 🙂 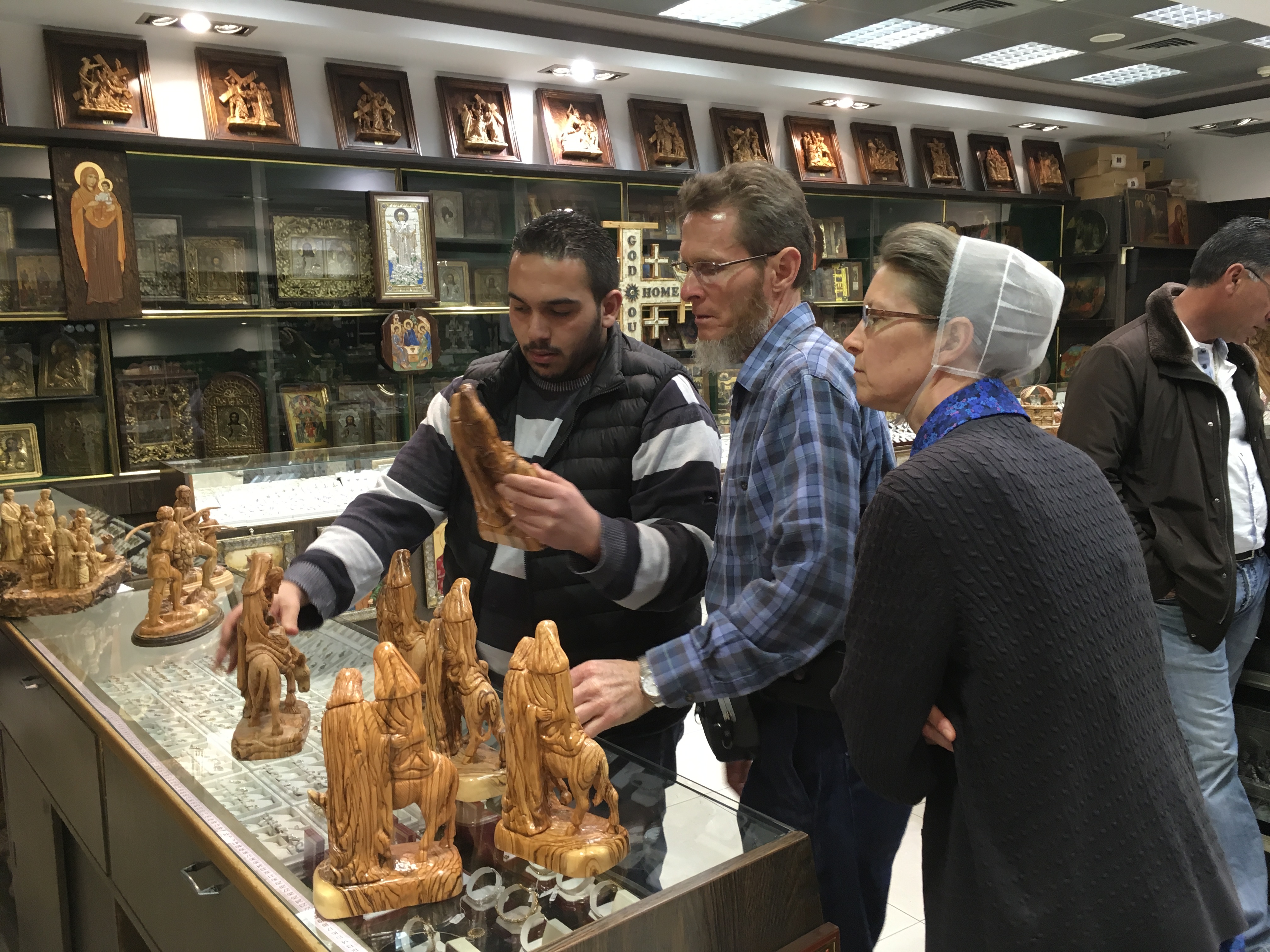 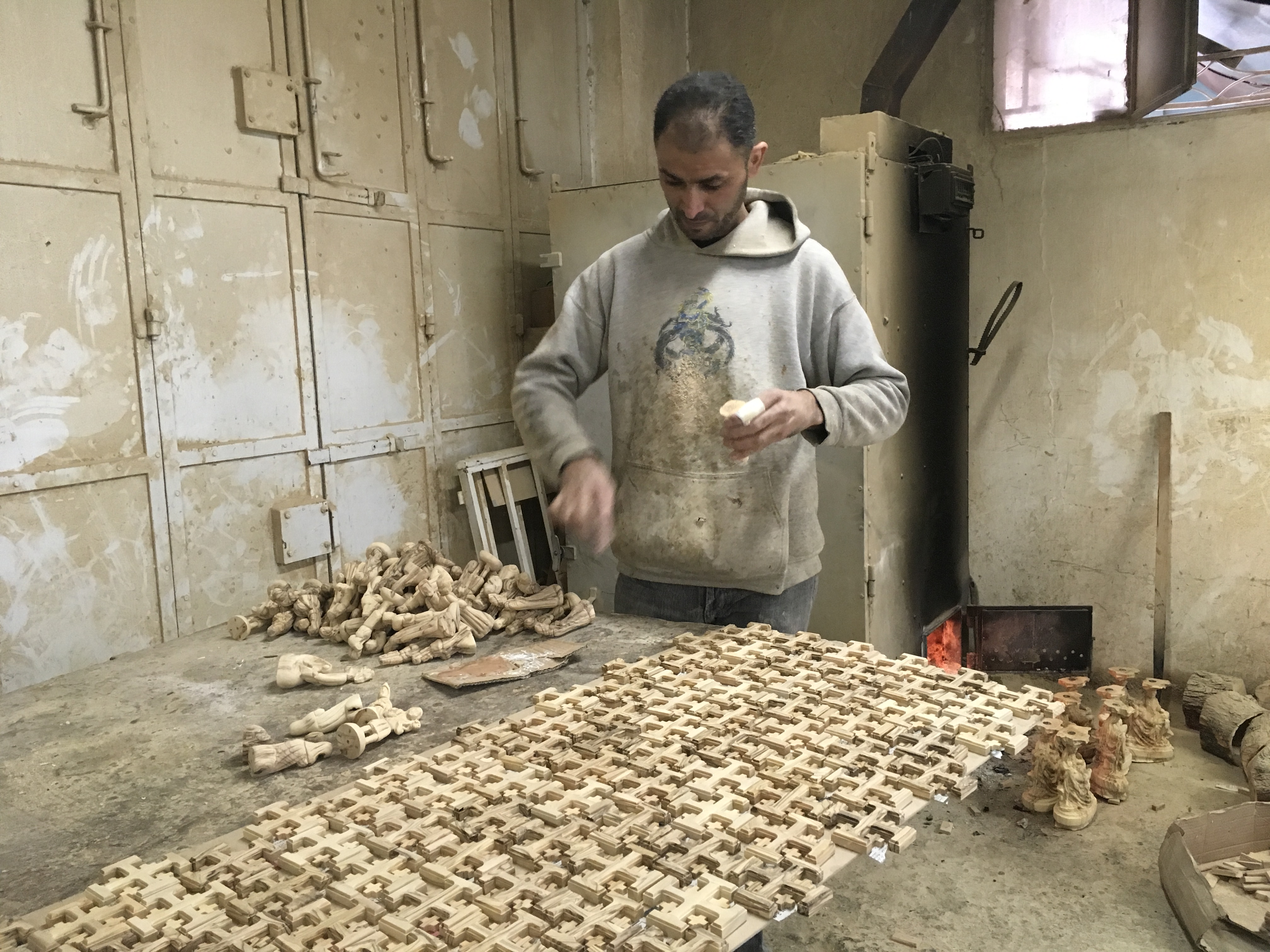 A stop in the Olive Wood store ties my stomach in knots. All this time I have been trying not to buy anything because I am planning to buy a nativity set here. I’m prepared to pay a good price. Ha. 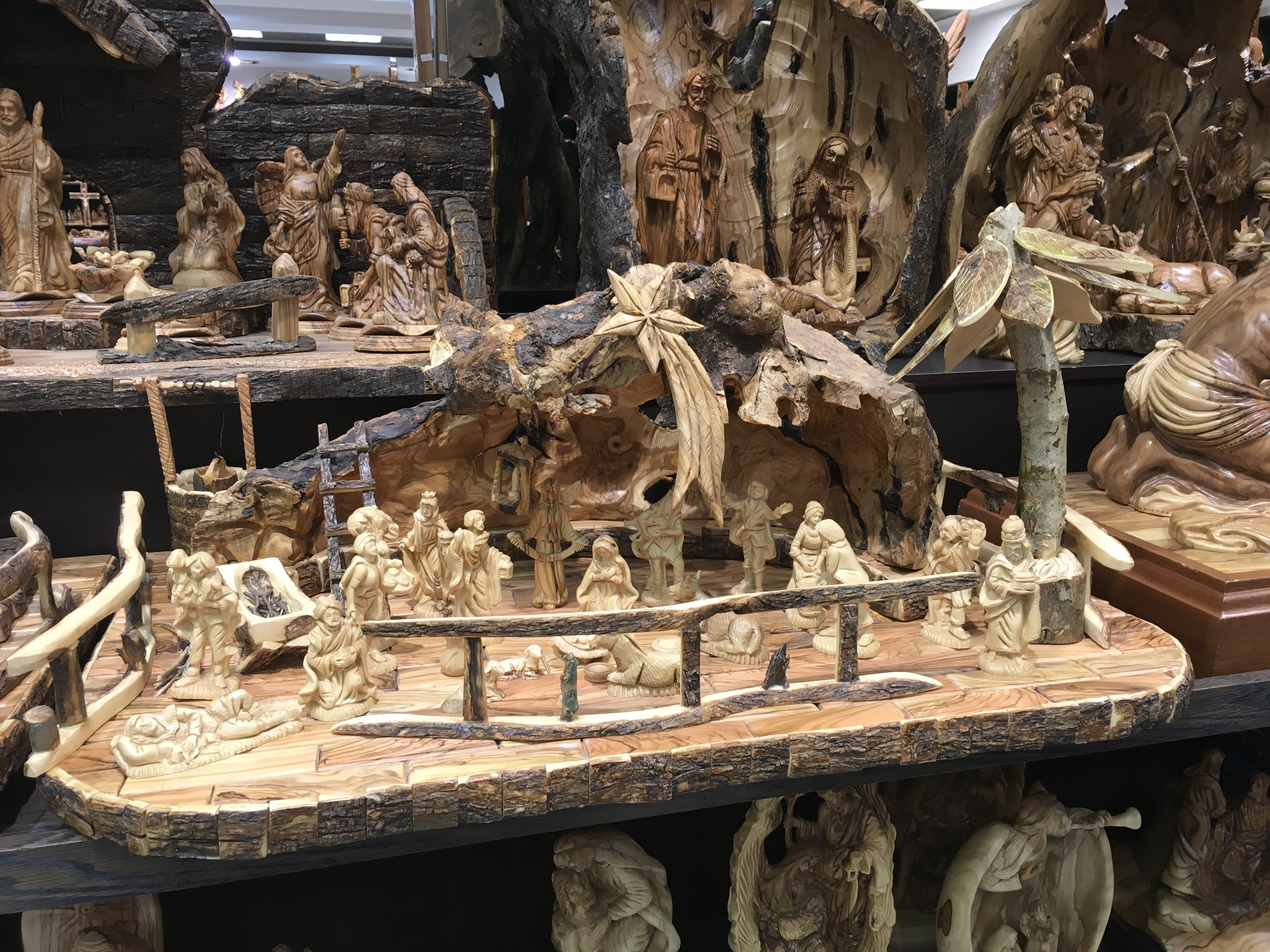 This one immediate captures my heart.

The clerks follow me around for FOURTY-FIVE minutes talking and gesturing and making deals and trading figurines around until they finally come down to $5000. I go outside to get away from them and immediatly am surrounded by 3 men selling purses. $10 apiece. I offer him $5 and buy one. A little while later another merchant tries to sell me the very same purse…3 for a dolla’!

Dwayne has a good conversation with an Arab Christian clerk at the store. She tells him life is not difficult for her in Bethlehem and that she has friends from all religion groups and gets along fine. She believes Bethlehem is a good area to live in and says not all of the West Bank is the same. 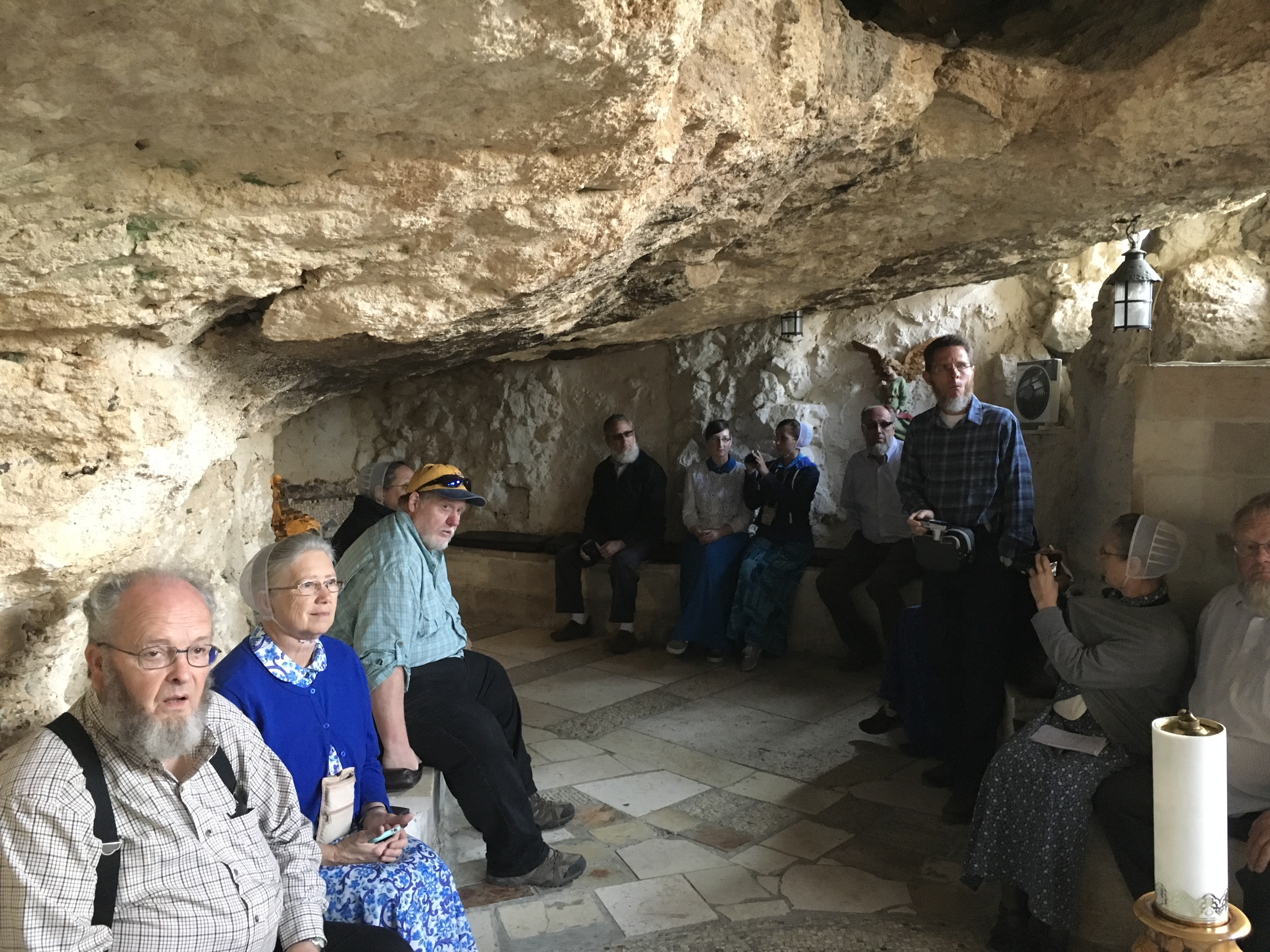 The rest of the day we spend seeing grottos, or caves, sometimes used by shepherds for protection in Bible times, and the area around the Church of the Nativity. 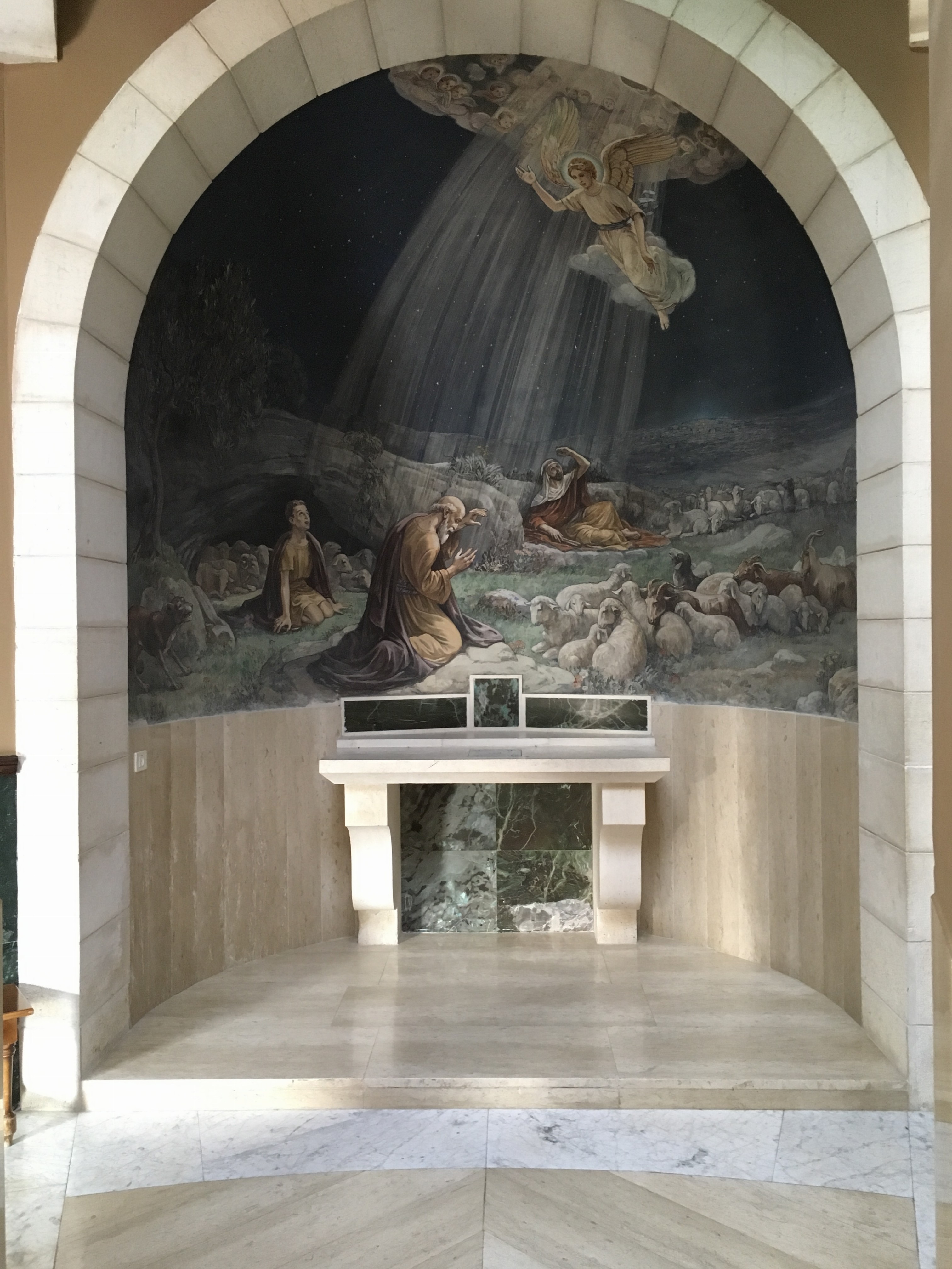 I love this painting. My photography doesn’t at all capture it’s beauty. So many of the churches we visit are filled with stunning paintings and mosaics. I haven’t been writing down all the names of all the churches we visit. It gets confusing after a while…there are so many, many churches, chapels and other buildings commemorating everything.

Was Jesus born in a cave or a stable made of wood?

Back at the motel we eat supper and then have a choice of evening activities. We can walk a few blocks and do some shopping, take a taxi to the King David to visit with Gary Garber’s group who are staying there, or stay home and relax. We choose the walk/shopping. It’s a cool evening and it feels good to be out at night. 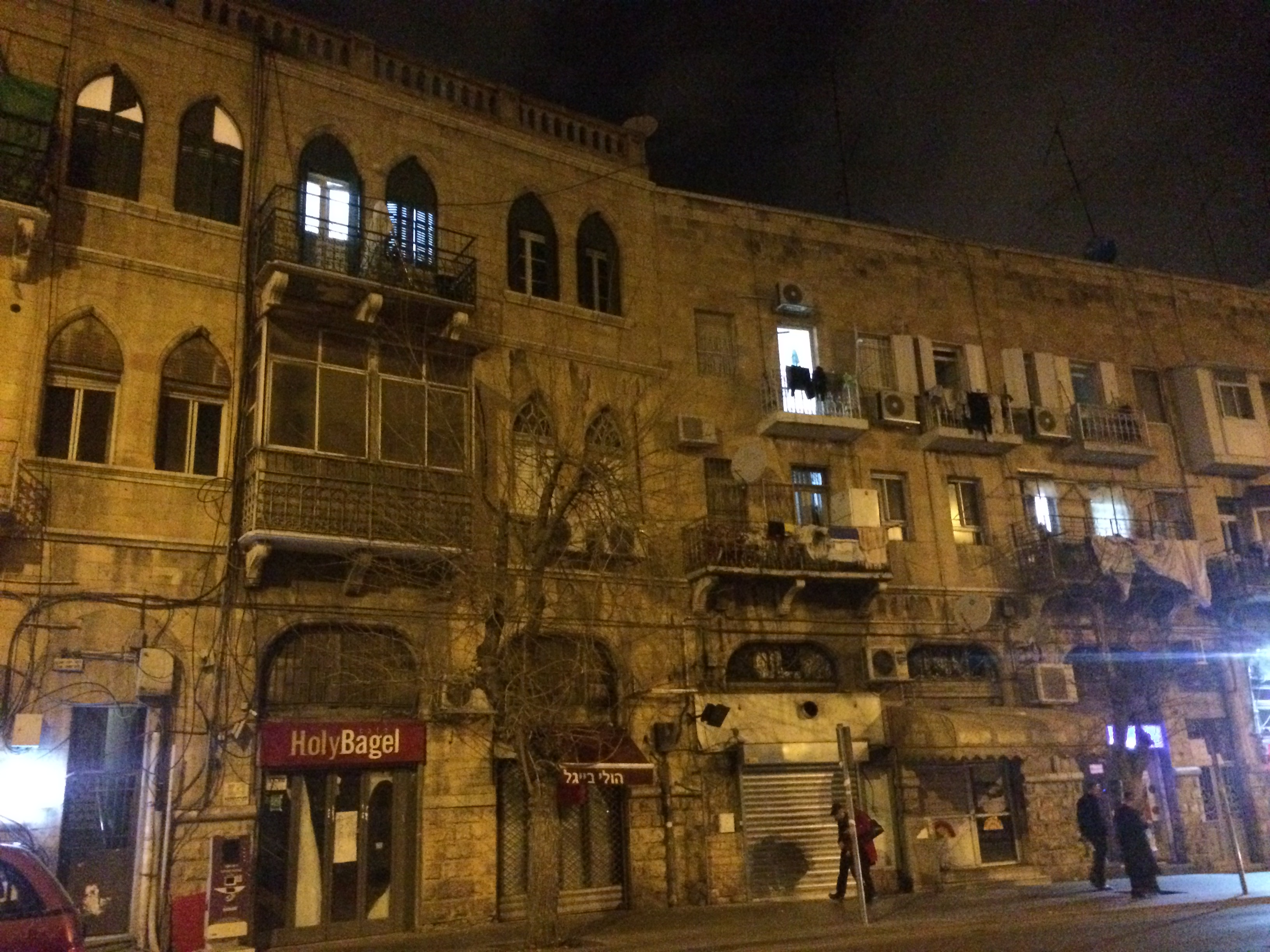 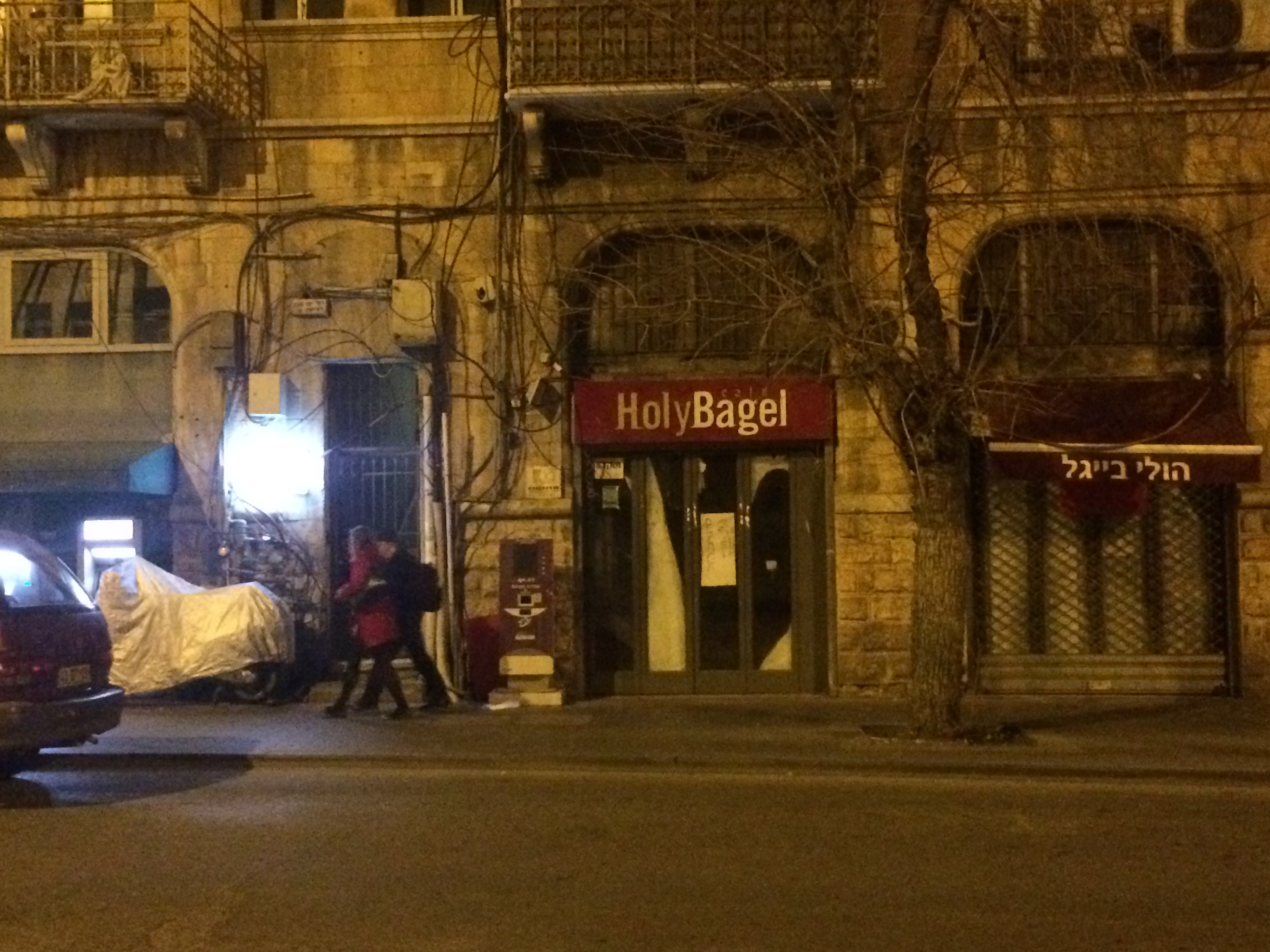 Apartments we walk past in the evening.

Another full day and we drop into bed exhausted but happy 🙂 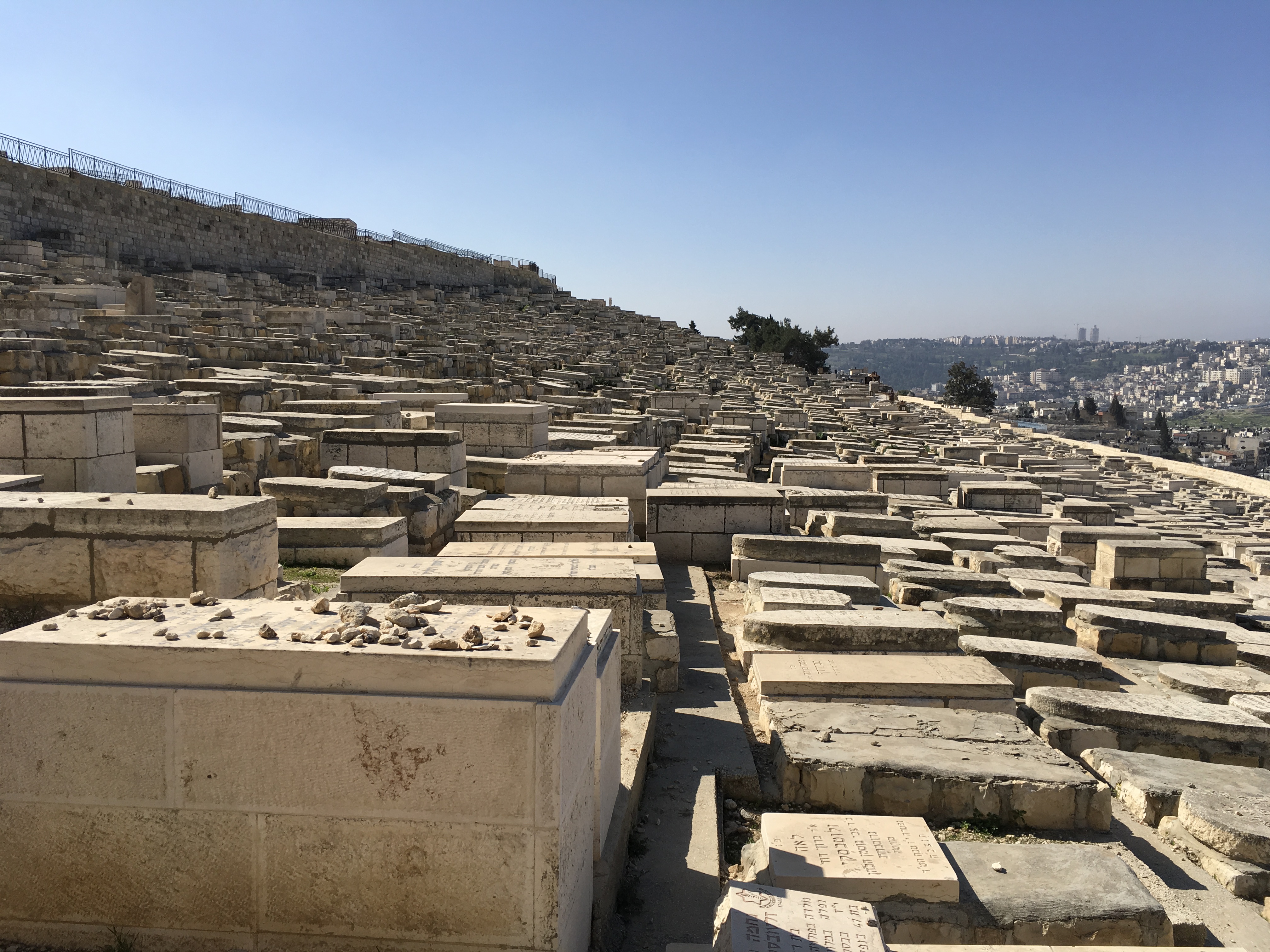 Oh, one more picture…graves along the slope right outside of Jerusalem. 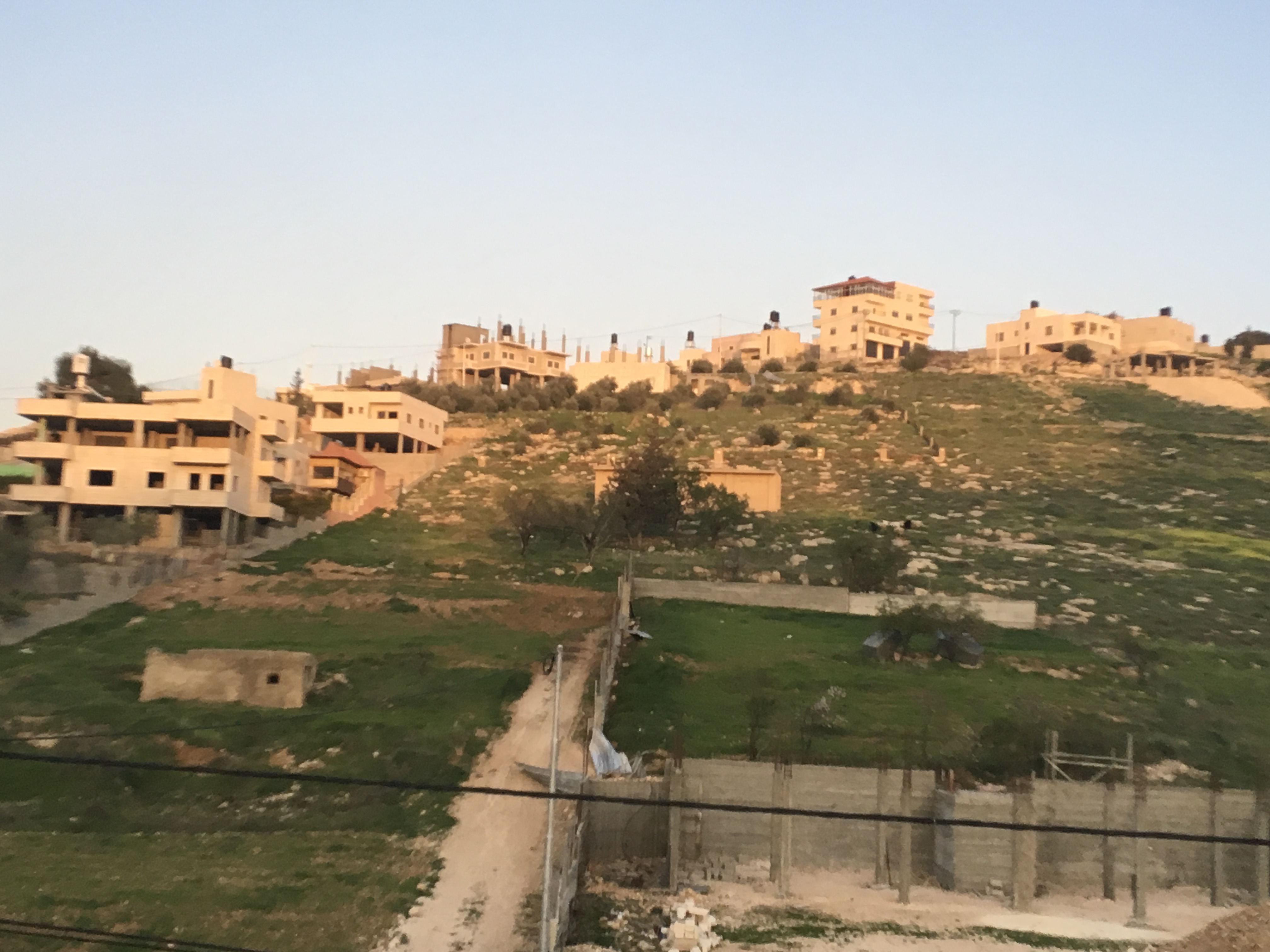 See that house on the left? There are tons of these all over…houses with an open and unfinished upstairs. In the Arab sections, people build homes with unfinished stories on top of the lower level. When your children marry, then you finish an upper floor and they live there. So no nursing homes….you just move down a level as you age. 🙂 I think this is a great idea. How fun to have my married kids living upstairs!  Dwayne and I were going to downsize soon but now we’re thinking of just adding an upper floor or two instead….