It’s a melancholy feeling to leave the Sea of Galilee. This is such a beautiful and peaceful place. Opal tells me that in the summer the lake is full of boats and vacationers but this time of year it’s quiet. If I stand on the shores and let your mind wander, I can almost imagine the busy fishing docks of Jesus’ day. Rough fishermen working on their boats…small cities dotting the shores

I don’t have a good picture that shows what it really looks like to stand on the bank and gaze across the sea. I even looked for one online and there’s nothing that suits me. I guess you’ll just have to come 🙂

However…I am NOT melancholy about leaving the kibbutz. I stumble to breakfast, wondering if all the rooms have flashing lights on the ceiling all night long, cardboard walls, leaking appliances, and dirty unmentionables on the bathroom floor left over from the last guest. I’m trying to be nice and don’t want to get a maid fired so I don’t complain to the front desk. Only to you 🙂

I do wish I could have gotten pictures of the Jewish children playing last night at the Kubbutz. It was their Sabbeth evening and there was quite a crowd of kiddos of all sizes racing around, inside the door and out again, their mothers occasionally shushing them or directing them back outside. I was struck with the common language that all children speak….Playing Games. The rules may differ a little from culture to culture but the running, cheering, whispering, and laughing are the same. The children here are so cute with their olive skin and dark, often curly, hair. 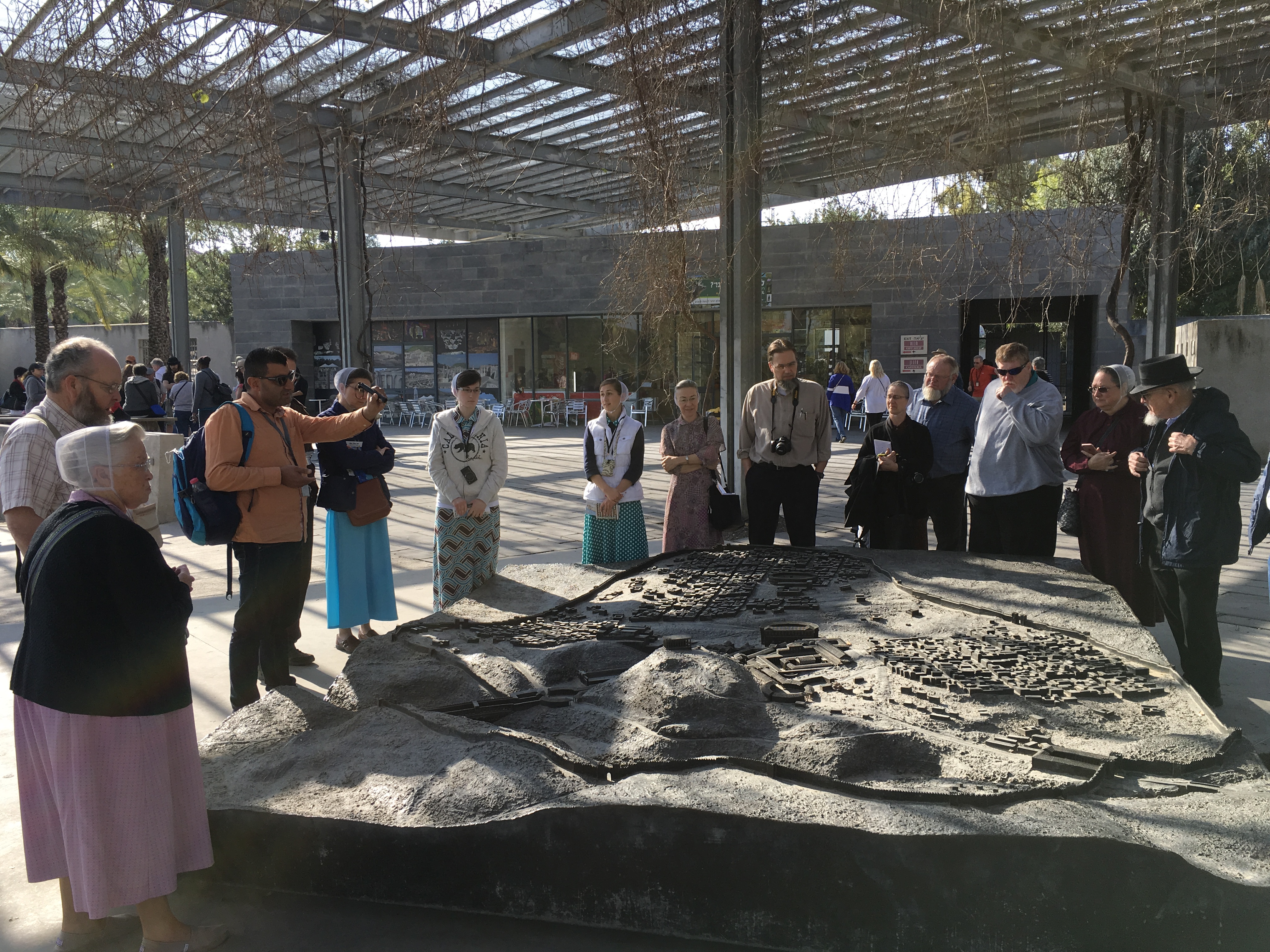 Bet-She’an ~ This ancient city from 5000 BC. In the Roman period it was the most important of the Ten Cities, the Decapolis, and the only one on the west bank of the Jordan. They are excavating large portions. We don’t have time to walk through them but get a good overview. 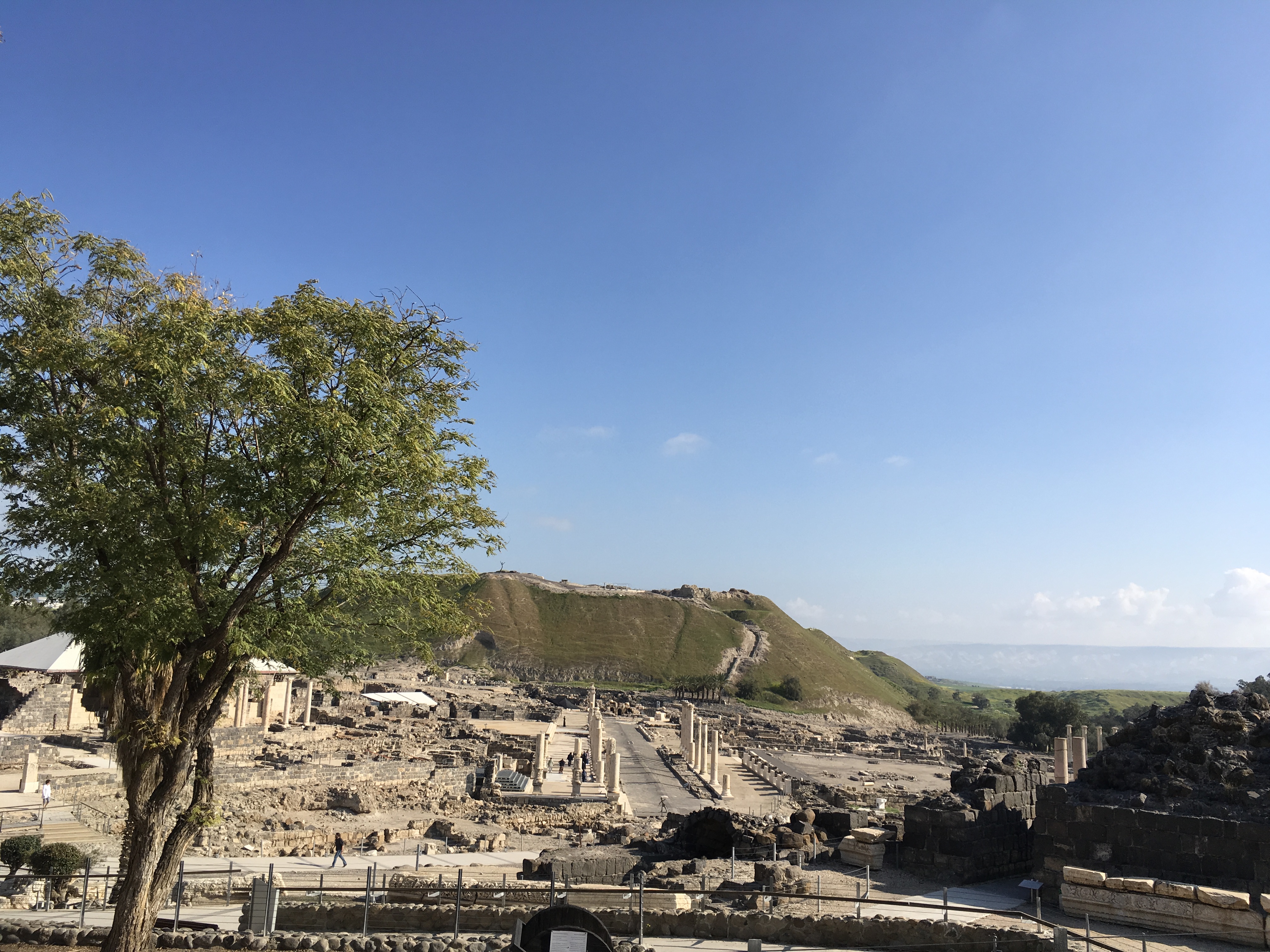 You can read of this city in II Sam 21:12 and II Sam 31:12. It speaks of the Philistines hanging the bones of King Saul and Jonathon here. 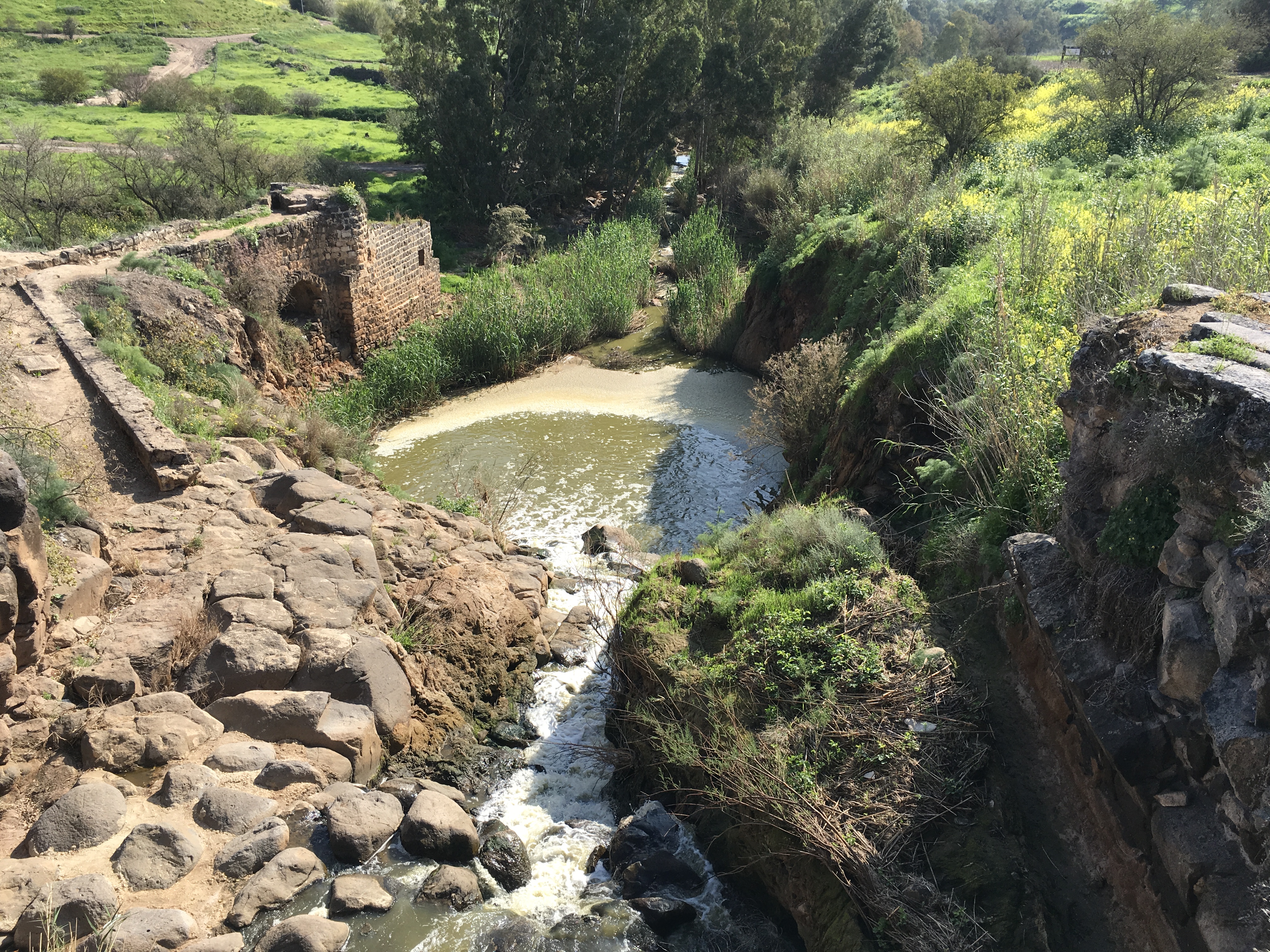 Nearby we see the Spring of Gideon, the waters where Gideon chose his men Judges 7. 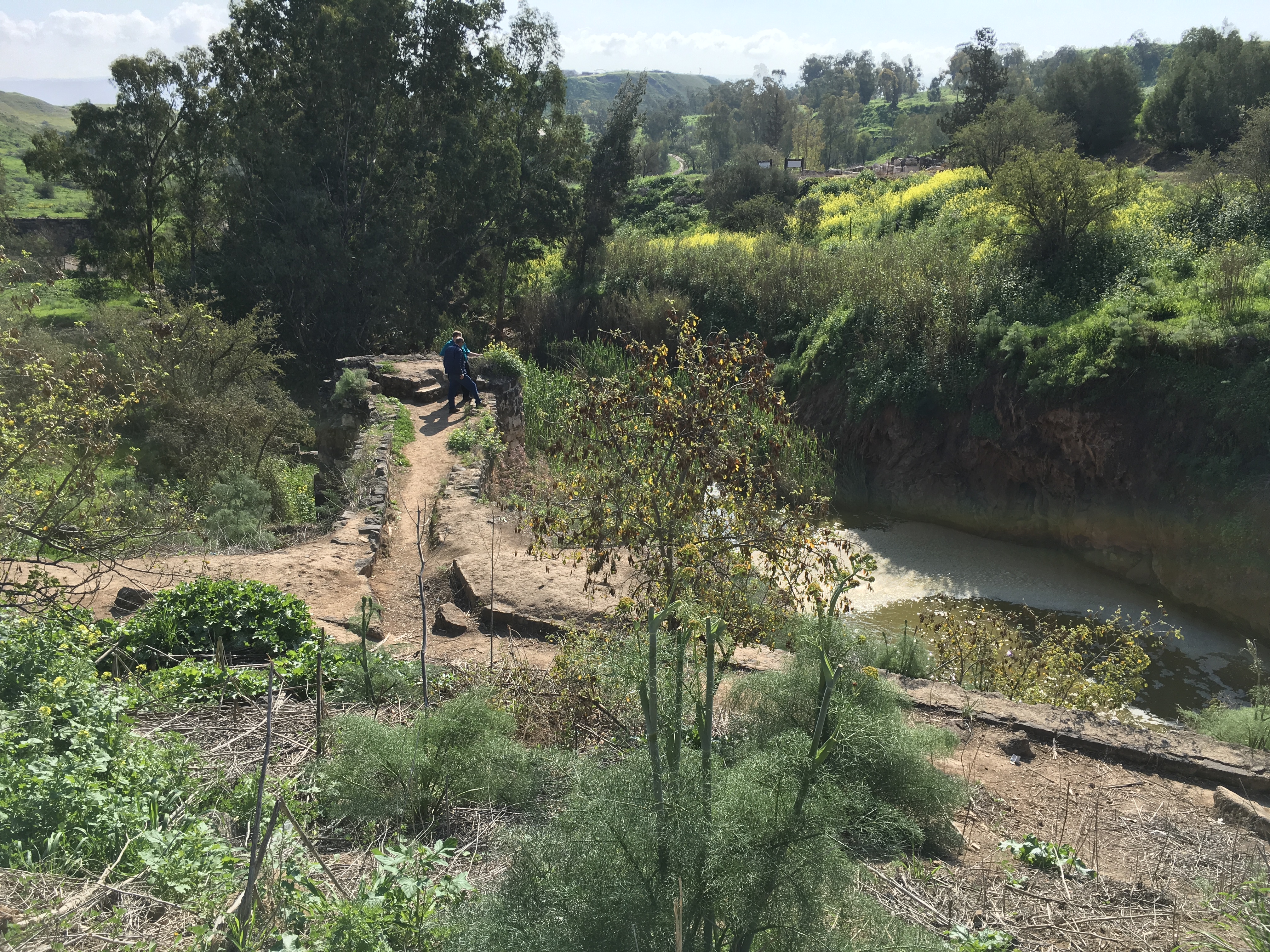 Except I’m pretty sure Gideon’s men didn’t drink this murky water. The actual spring is 10 miles north and in a park. We can’t get in there today so they bring us to this site downstream. Dave and Dwayne are standing on a portion of the old city wall of Bet-She’an.

Even when a site leaves me underimpressed, I enjoy the sunshine, palm trees, and other beautiful vegetation that is everywhere. 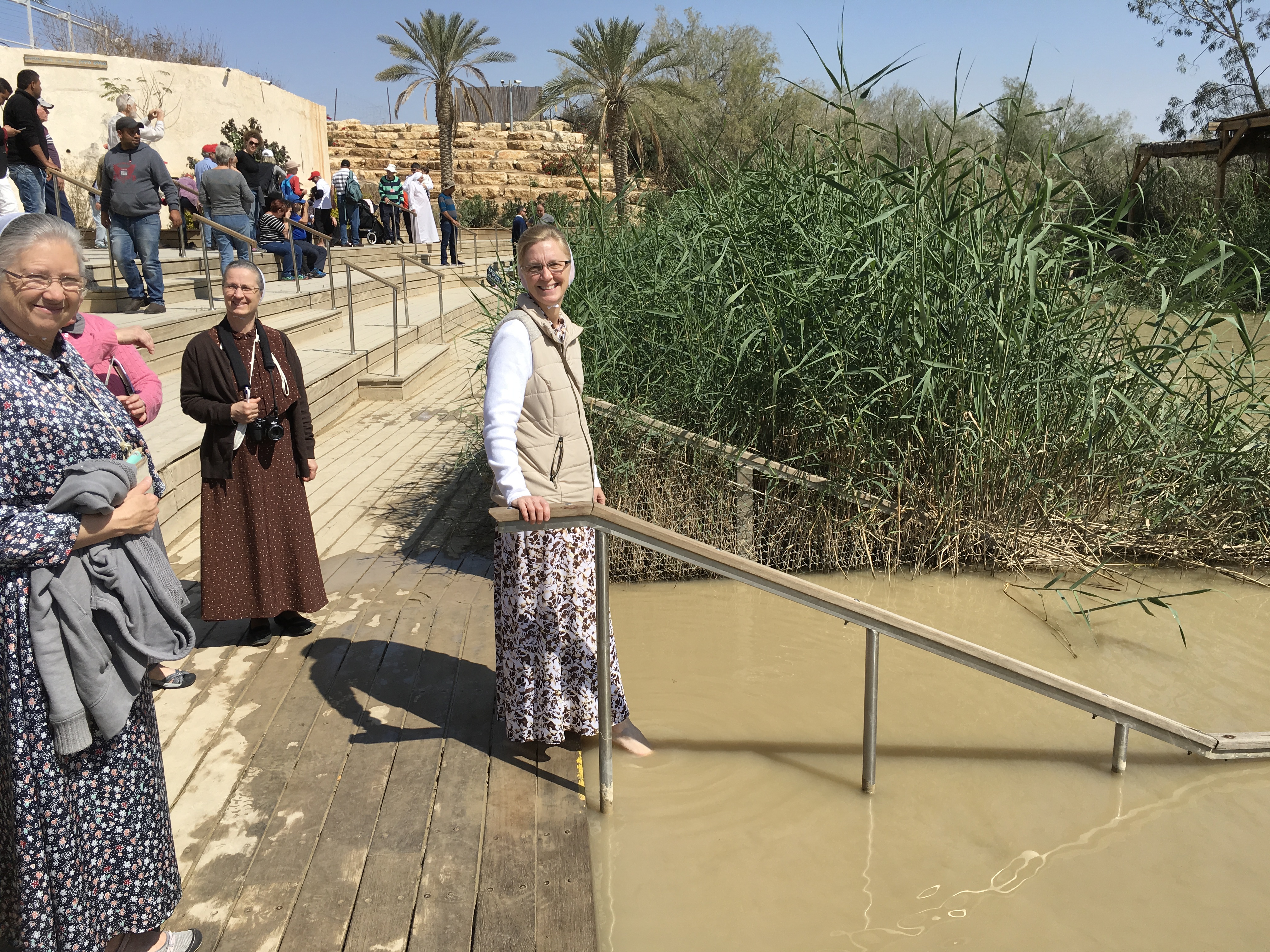 We stop at the traditional site of Jesus baptism and I dip my toes in the muddy water. They tell us that only 10% of the water from the Sea actually makes it down to the Dead Sea these days. I like to think that when John baptized, this stream was a rushing flow of clear, rippling water. 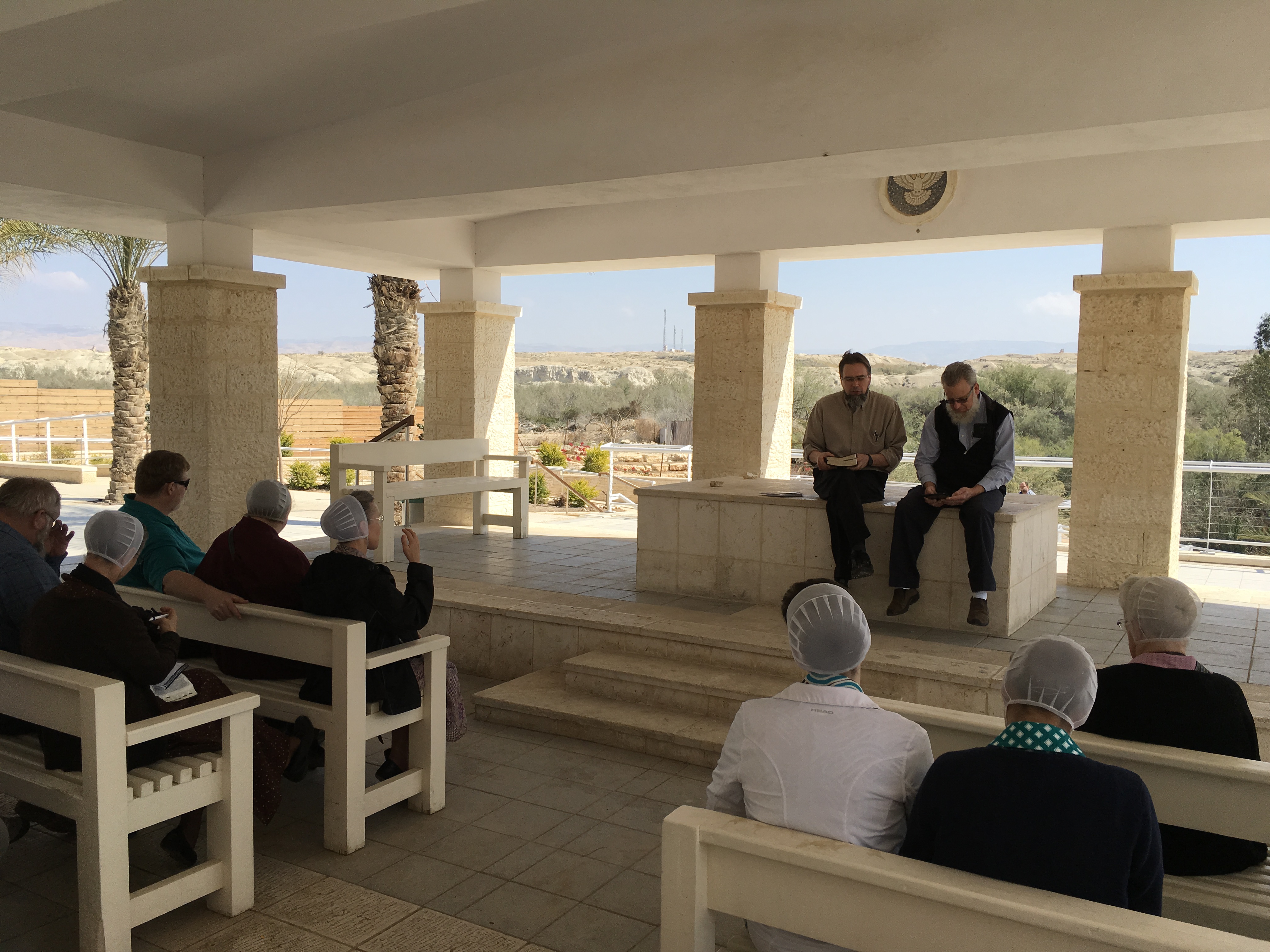 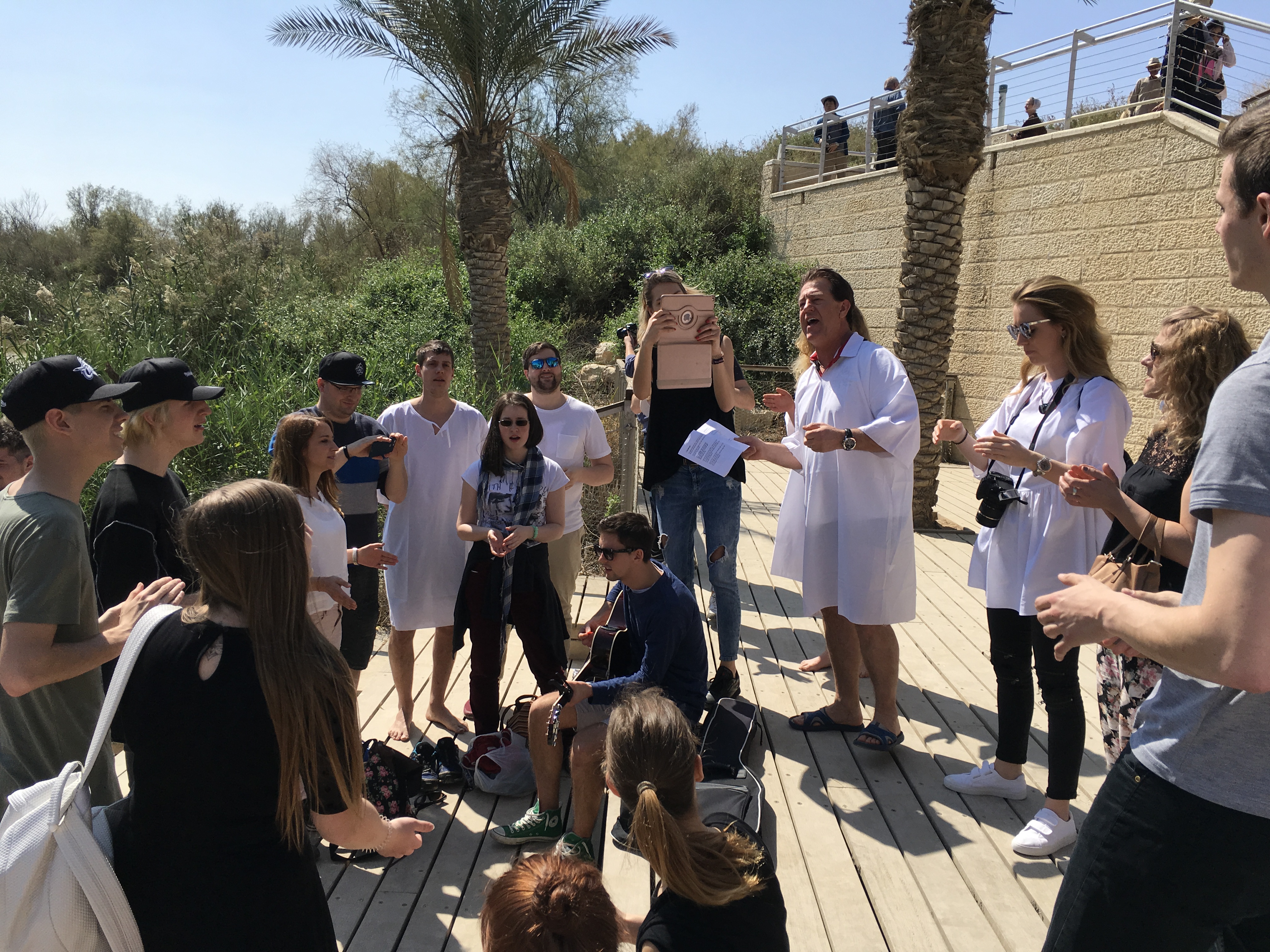 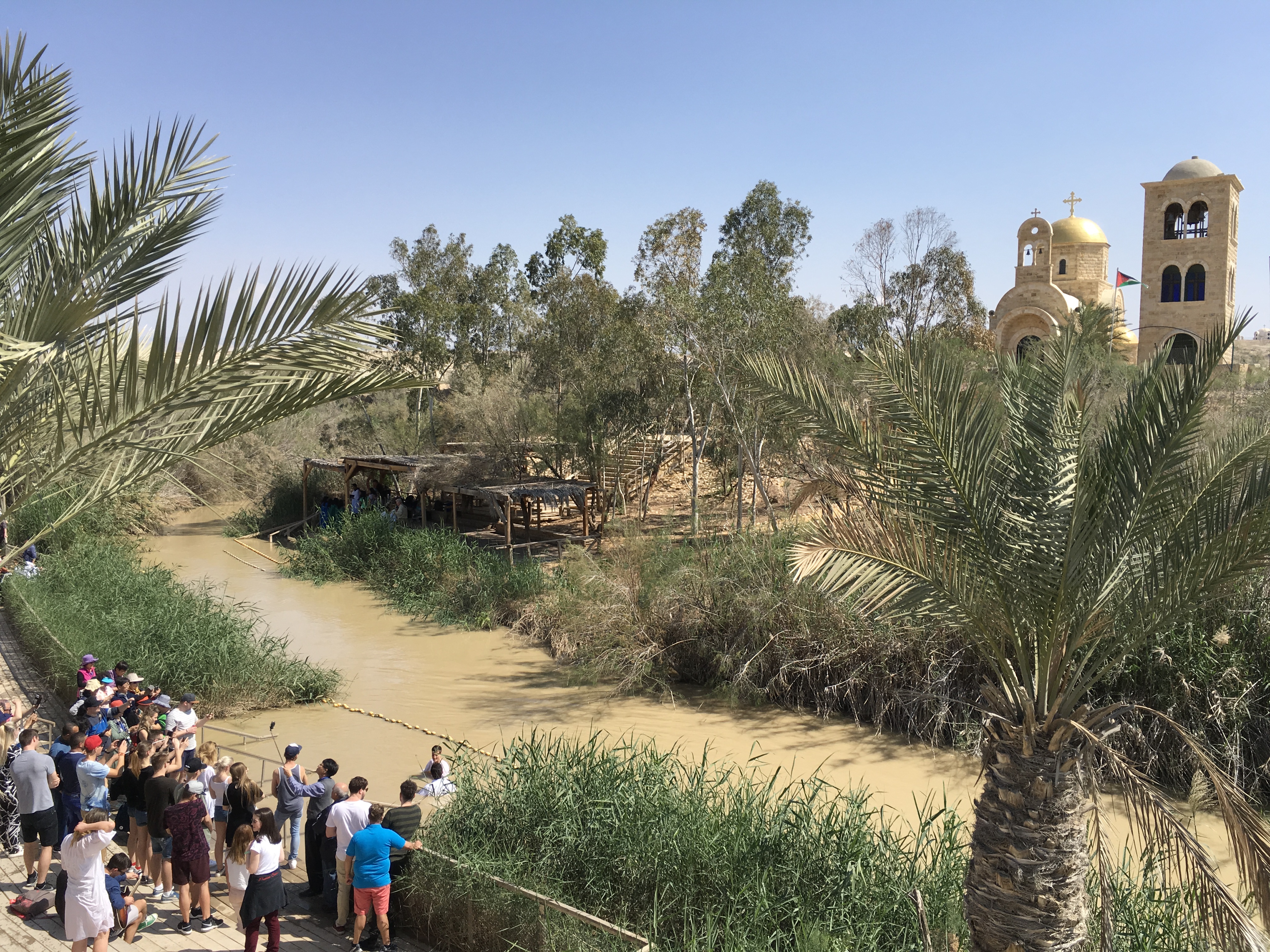 And watch as some of them are baptized.
No one knows for sure where Jesus was baptized but we are very near to the Judean wilderness where He likely went afterwards and was tempted of the devil.

We follow the Jordan river south for an hour. If I look down for even 2 minutes the scenery has changed. We pass thousands of greenhouses, forests of palm trees, and hills that remind me of the Yakima Valley except they are lush and green.
Shepherds keep their sheep in these hill, living in caves and sometimes tents. The sheep blend in with the stones and are hard to spot. 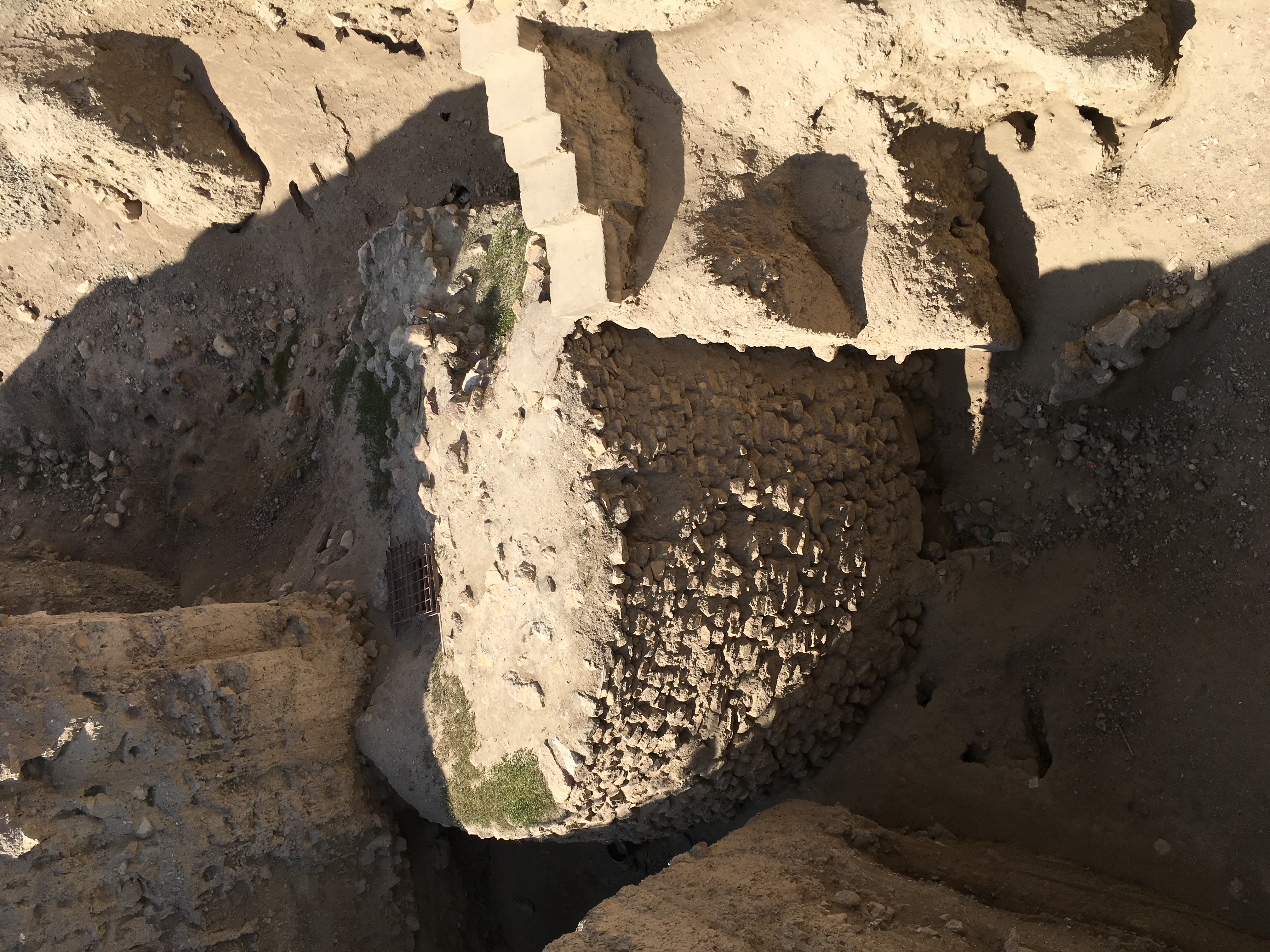 Jericho ~ We visit the ancient section which the British began to excavate in the 1920’s and can see part of a watchtower (pic above) they have uncovered. This is the area the spies would have seen when they first entered the land of milk and honey and the city whose walls came tumbling down. Zacchius lived here, Bartimaeus was healed here, and the Mount of Temptation and is nearby. The remains found here at Jericho are believed to be the oldest in all of Israel. We see a lot of agriculture here. 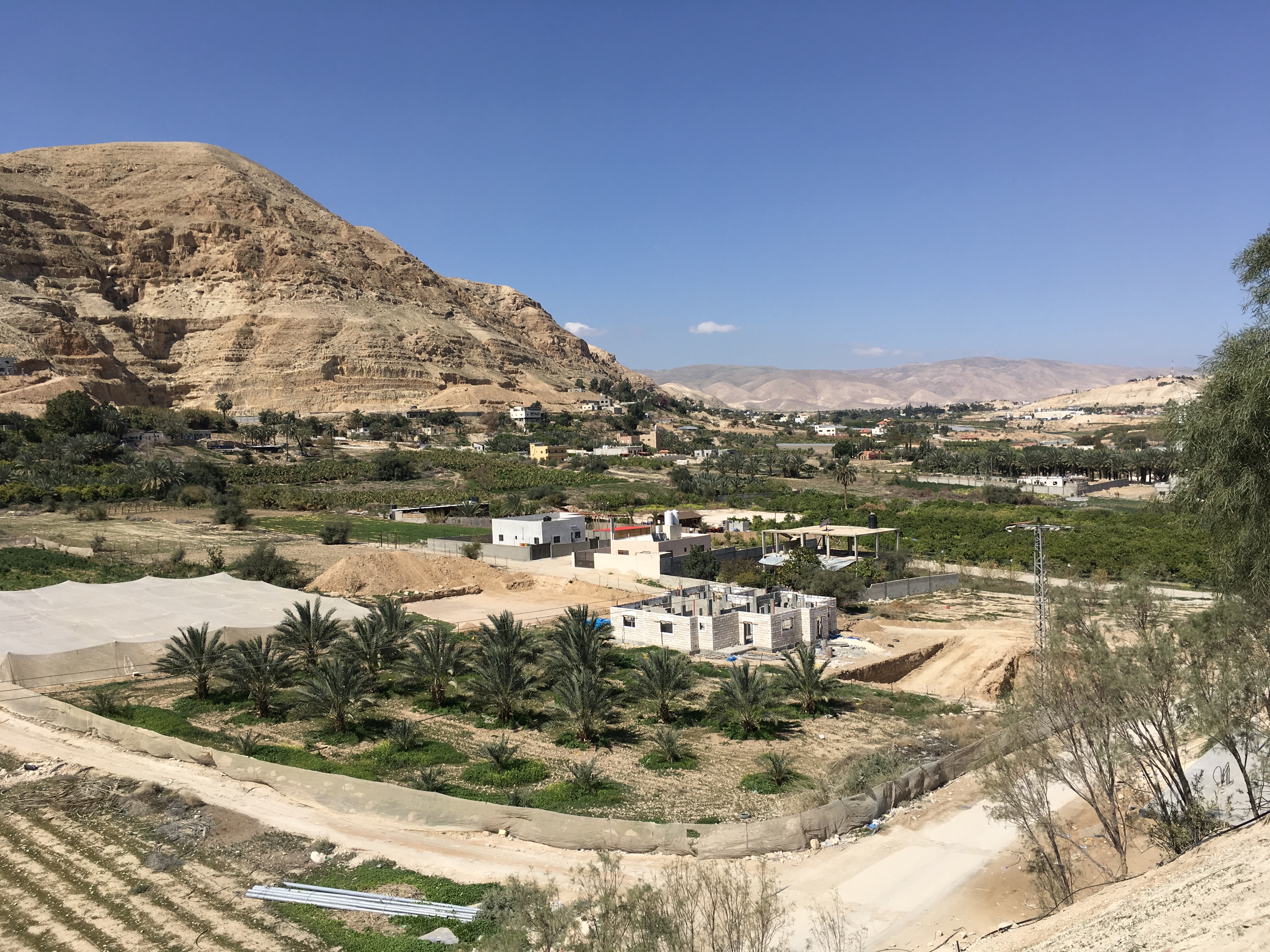 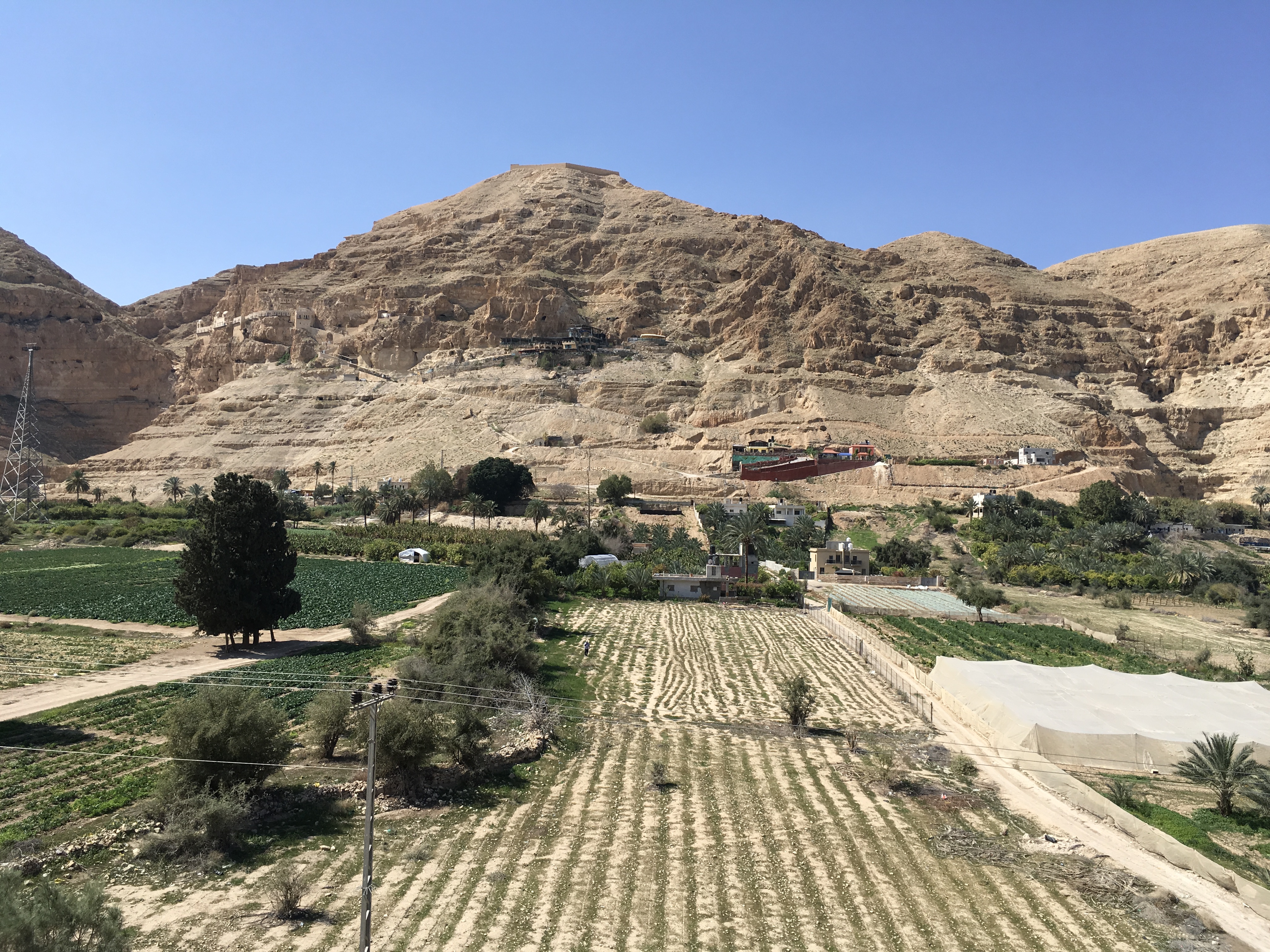 This is the Mount of Temptation….the mountain where Satan may have tempted Jesus to jump down. From the peak, all the fertile valley along the Jordan could have been seen. We don’t have time to take the cable cars up but view it from the bottom.
Since entering Jericho, we have been in the West Bank area of Israel. Many Israeli tour groups cannot get into this area because it is controlled by the Palestinian people. They need special insurance policies in order to come in and may not be well received.

Nibeal, our guide, is a Christian Arab and our bus driver, Ahab, is Arab Muslim so we have no problem.

It’s fun to eat a traditional Arab lunch, shop in their stores a little and we pick up a sack of the most delicious oranges! 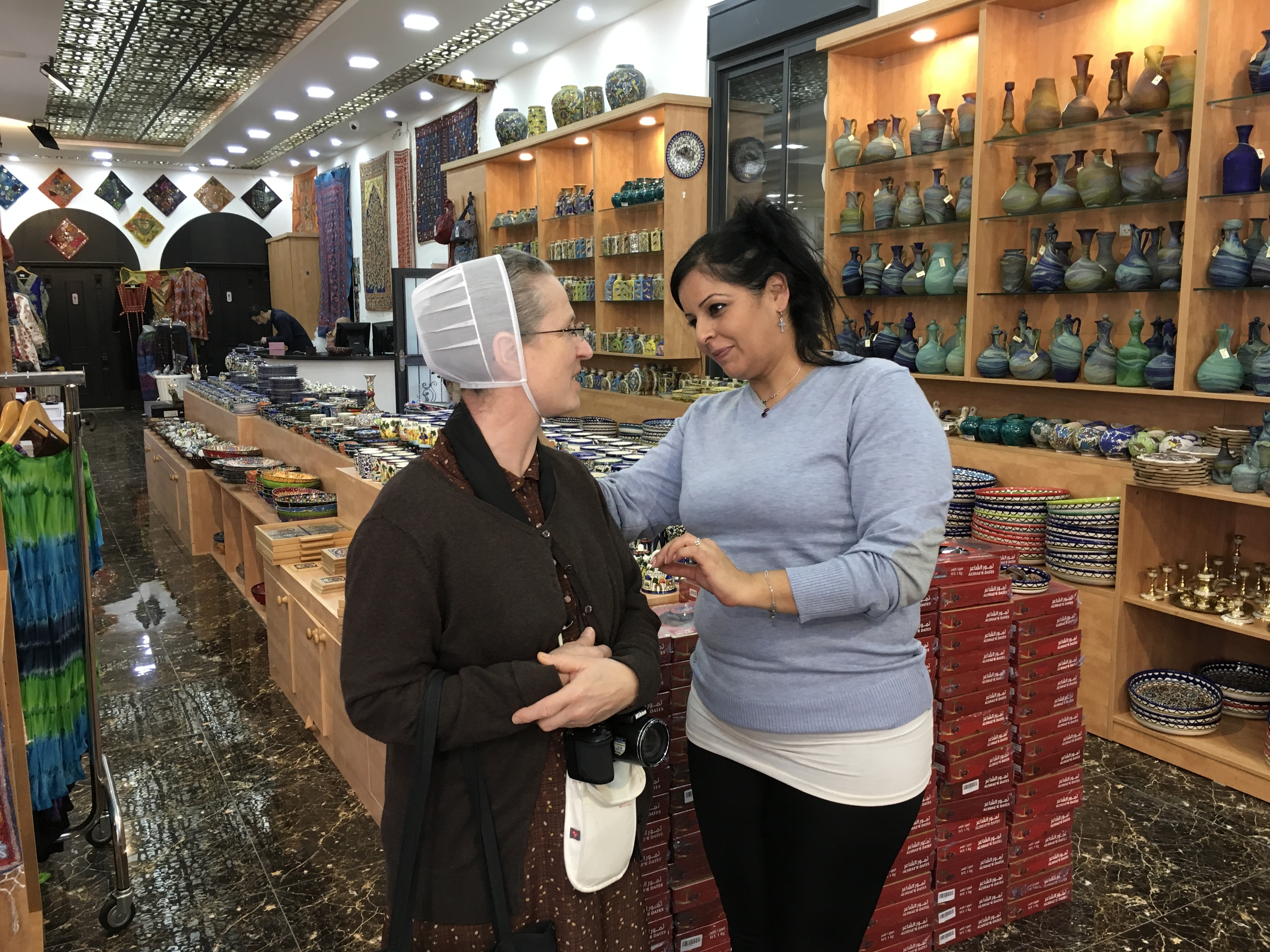 Shopping is *quite* the deal here. This picture shows just how it goes. First they sidle up to you being all nice and helpful and talking a mile a minute… 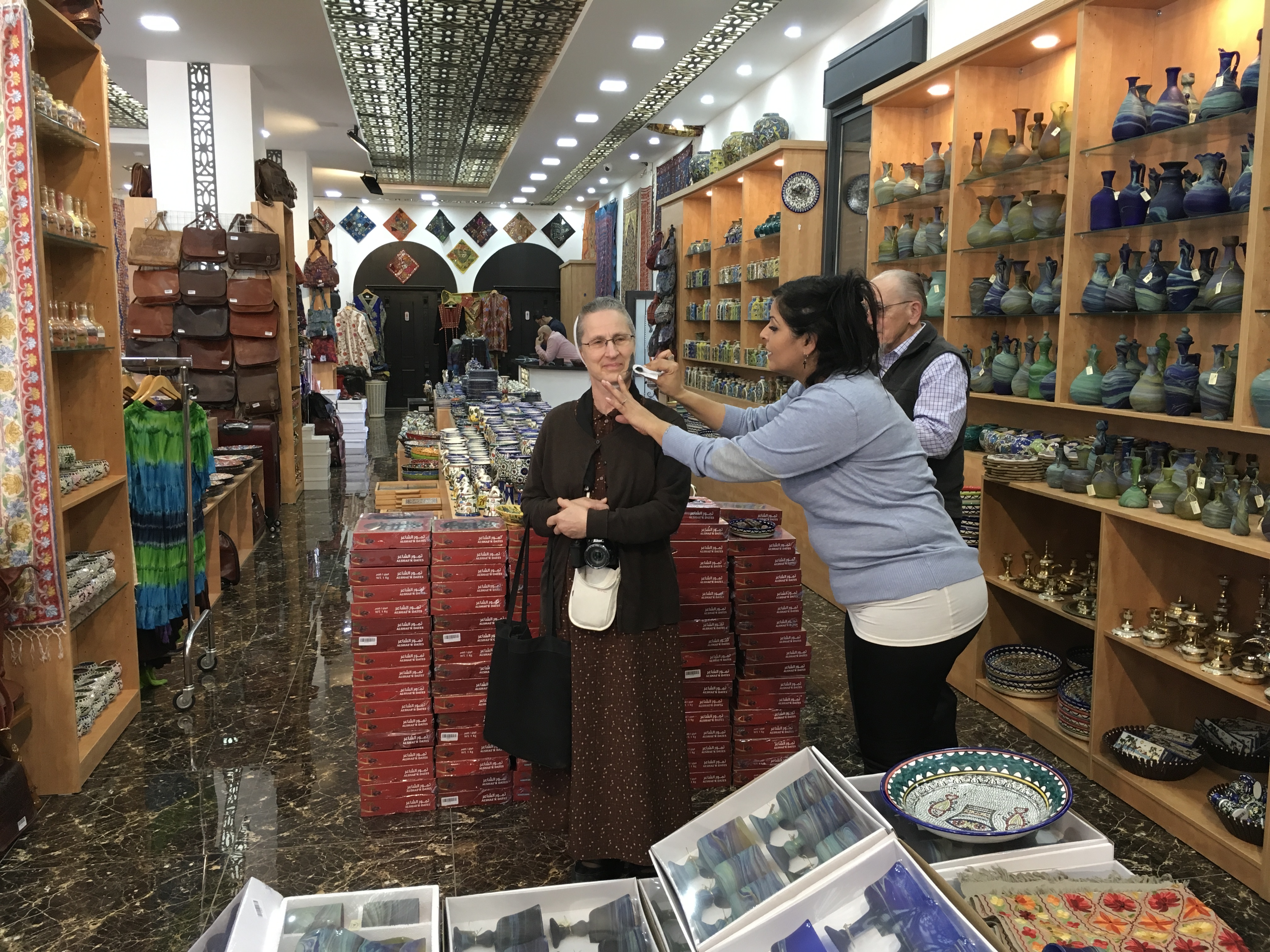 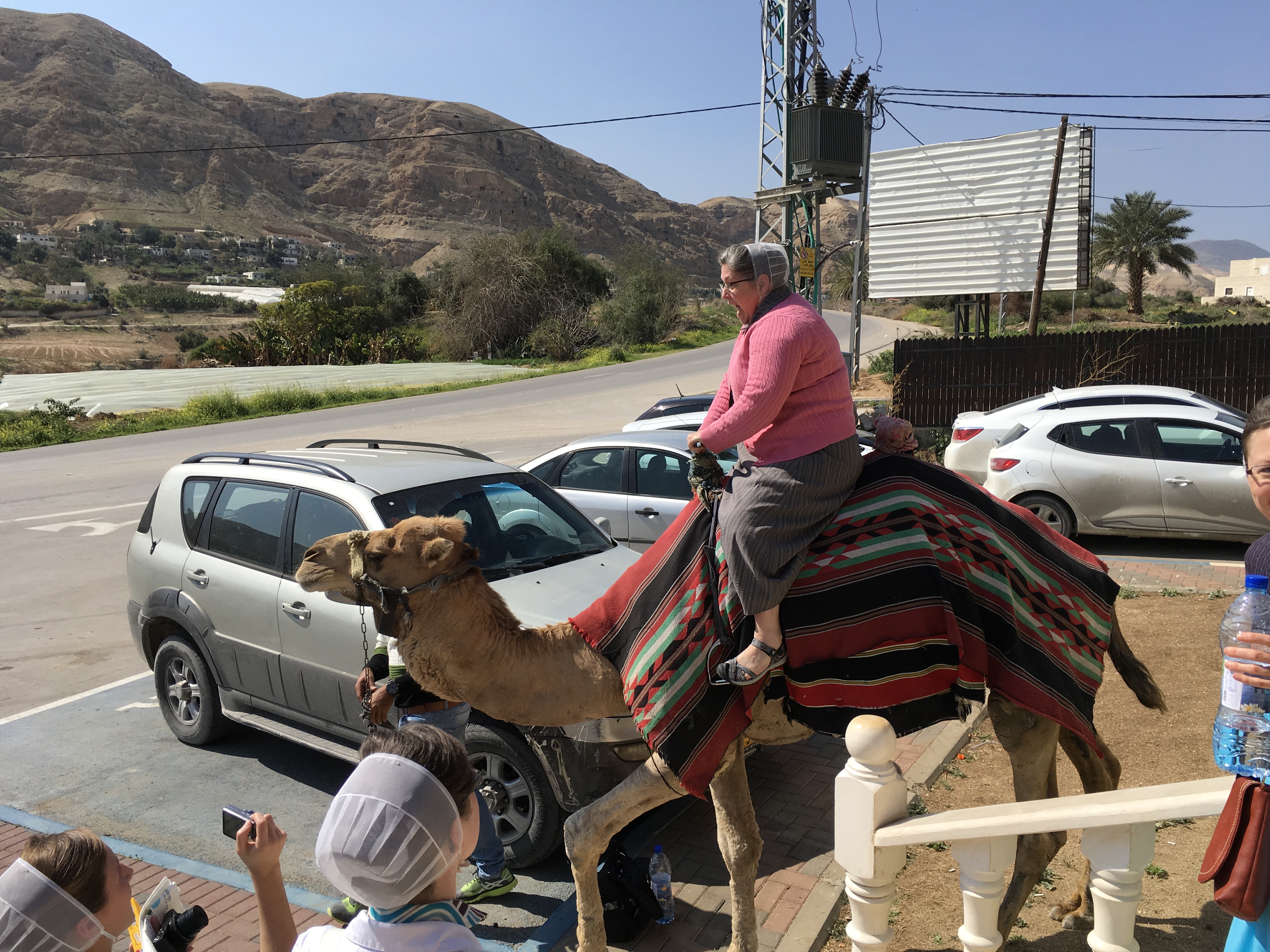 …or better yet…they have you atop a camel 🙂

Nibeal helps us by taking us to shops with the best prices and then helps us barter. I’m trying not to buy much because I think I know what I really want….it’s expensive and it’s in Jerusalem 🙂
Qumeran ~ My mother has some really interesting information in her diaries about the Essenes who lived here and copied the scriptures. It is believed that John the Baptist was a part of this sect who immersed twice daily in water to purify themselves. They lived in this desert mountain, secluded and a little like you would think of monks living. How interesting that John began to immerse the common people, calling them to repentance and preparing the way for the Lamb of God!  These men all scattered in AD 70 and never returned. It is here that the ancient scrolls were found in…uh oh…I forget. Recently 🙂
Gotta run! We’ve been driving right along the salty Dead Sea, with barren hills against us on the other side and are nearly at our motel where we will swim in the Dead Sea before dark and, hopefully, I will not do awkward summersaults in front of everyone.